The City of Light took a sober turn for fall with Gothic glam and tough-girl chic. 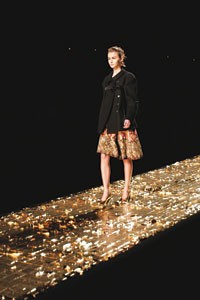 The City of Light took a sober turn for fall with Gothic glam and tough-girl chic. Add a touch of self-assured sophistication, and altogether it was beautiful.

Christian Dior: Punk, “Matrix,” off-with-their-heads revolutionary France — all are neighborhoods on fashion’s dark side that John Galliano has trolled in the past. So how could he resist taking a leading role in fall’s sober sojourn? In the collection he showed on Tuesday night, Galliano’s girls bore all the trappings of disaffected angst, starting with the demonstrative sunglasses, heavy crosses and taut black head scarves that made them look like members of a gang intent on converting the world to Gothic Chic — the name of the collection.

Thus, the lineup oozed attitude — and a whole lot more. Because these girls looked fabulous in clothes that were on trend yet unmistakably Galliano in cut, embellishment and bravado. Love a jacket? So does the designer. He showed them in everything from printed felt to rubberized linen. In fact, for all its antiestablishment posturing, this collection was rooted in a dressed-up sensibility; stripped of their Goth affectations, the clothes could just as easily swing lady or vamp. That’s because the core pieces were a curvy jacket, a slim skirt, a substantial coat.

Simple enough, except that nothing is simple chez Dior, which has the wherewithal to make possible whatever complex musings might emerge from the designer’s vivid imagination. Why feature mere black, when there are so many possible tones and textures? Thus, Galliano made degradé a key concept, shading bouclé into chiffon and wool into organza. And he went mad for skins, working them in seemingly incongruous combinations — jackets in leather worked with mink, or at the other end of the spectrum, tulle; a high-drama black bouclé coat encircled with spirals of goat hair and Mongolian lamb.

As for evening, Galliano’s Goth girls seemed in denial, hiding glorious gowns under big, protective coats. Luckily, those not into such self-delusion can lose the cover and embrace the night — the partying kind — in drop-dead glam regalia.

Givenchy: The trick-free black runway at Givenchy’s show indicated that Riccardo Tisci had moved on from the irritating, theatrical staging that has marked his young career — a good move. But merely reining in the presentation — straightforward but for some inexplicable casting (he opened with black models in black dresses and bookish eyeglasses and moved on to blonde models in white shirts before letting the model-statement idea fall apart) — was only a small step in the process of claiming the house of Givenchy as his own.

He’s got a long way to go. Tisci’s talent and skills at the cutting table are undeniable, channeled as they were into a fall collection that lurched from slim black tailored dresses and red-splattered white shirts to tough-girl looks with a military flair. Between his ready-to-wear and couture responsibilities, this is his fourth collection for the house. Yet beyond some brooding flights of fancy and a too-obvious respect for Azzedine Alaïa, still no clear picture has emerged of exactly what his vision is for Givenchy. Certainly there were some beautiful clothes here. But as we all know, the strength of a house doesn’t derive solely from the odd beautifully tailored wool coat or a lovely velvet dress. Considering that some of the first models out were double-fisting huge black leather handbags, it’s obvious that Tisci — or perhaps his guardians inside Givenchy — is well aware of where the money is. But before potential “It” bags fly off boutique shelves leaving lengthy waiting lists in their dust, a strong identity has to be forged. So far, it has yet to arrive chez Givenchy.

Dries Van Noten: In a word, it was delightful — or in three, oh so refined. In fact, however you put it, watching Dries Van Noten’s vision of self-assured chic unfold on the runway was a true pleasure. First of all, the setting itself couldn’t have been more serene. Waiters served sweets and tea, then up went the curtain to reveal a runway fluttering from end to end with delicate petals of gold leaf. As for the clothes, well, they were elegant and then some.

As everyone knows, where exotica is concerned, Van Noten has been there and done that. Forgoing the giddiness of a dabbler, he presented a sophisticated collection that relied on his well-traveled roots while never giving way to costumery. A regal coat in indigo blue was printed with shadowy vines, while full-cut skirts came richly embroidered at their borders. Throughout, Van Noten demonstrated a masterful hand with sober suitings that were neat and clean, but comfortably slouchy. His suit: a slim chalk-striped jacket tucked into high-waisted pants. A man’s coat thinly lined with fur was perfectly restrained, while others came smartly tied above the bustline. It was a fine moment for Van Noten to shine — from his high-karat runway on up.