Daryl Kerrigan Does It All

These days, Daryl Kerrigan is her own chief designer, sales woman, press agent and, while we’re at it, cook and bottle washer. And she’s all the 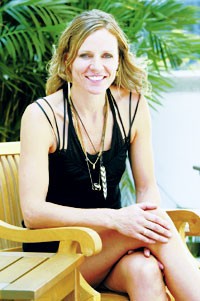 These days, Daryl Kerrigan is her own chief designer, sales woman, press agent and, while we’re at it, cook and bottle washer. And she’s all the

Since Kerrigan returned from fashion purgatory last September, the designer has been taking careful steps to rebuild a reputation that had been tarnished in the demise of the Pegasus Apparel Group. She’s lined up production in Hong Kong, reclaimed her old Daryl K shop on Bond Street and reconnected with the loyal customers who never forgot Kerrigan’s downtown edge or the fit of her pants. Back on her own, the stakes are higher, as Kerrigan and her husband, Paul Leonard, took out a second mortgage on their Brooklyn Heights home for about $350,000 to reopen the store.

“It’s so scary, owing money, but I did it because I feel really confident now,” said Kerrigan. “The second time around, you’re a better designer. You’re good when you’re beginning, but you can only get better and better. It’s the same thing with getting older — your experience has doubled, and you begin to have your own body issues, so you understand a lot more.”

Older and wiser, that’s one way to describe Kerrigan. Yes, she’s still very downtown and hip, selling T-shirts in her store that say “Drug Dealer,” but she also recently turned 40. (And the T-shirts are actually the brainchild of Lee Blake to benefit a charity called Keep a Child Alive by paying for its medicine.) As a result, her spring collection has a bit more polish, as well, still infused with punk references as interpreted through tribal African prints, jokingly referred to as “Zulu Cowboy,” but the cut is a bit looser and more forgiving of the passage of time.

“That whole subversive thing — it’s not really that scary anymore, is it?” she asked.

Kerrigan’s emphasis on loose-fitting jersey minidresses, meant to be worn over a pair of shorts, was inspired by consumer research derived straight from the store. That’s the sort of look customers were leaning toward, “so that’s the direction we are going,” she said. “All the old customers are coming back. The store has become the engine behind everything I’m doing.”

With a small team, including freelance designer Lee Copper-Wheat (formerly of the British duo Copperwheat Blundell), Kerrigan put together a spring collection that recalled the Daryl K of yore, with slouchy trousers worn loose on the hips, layer upon layer of thin jersey T-shirts and old Brooks Brothers chambray dress shirts individually restyled as an off-the-shoulder blouse, or Empire-waisted top.

Since the Pegasus debacle, Kerrigan has recovered the confidence to do her own thing. The legal arrangement that enabled her to regain the right to design under her own name prohibits Kerrigan from speaking about the experience, she said, but she noted there is no longer any business connection between Daryl K and Pegasus Capital Advisors, the Connecticut investment bank that financed the rapid-fire acquisitions of companies such as Miguel Adrover, Pamela Dennis and Judith Leiber.

“All I can say is that we didn’t get off scot-free,” Kerrigan said.

Still, there’s a lot Kerrigan has learned from the experience. There’s no longer any secondary collection, something which Kerrigan used to design at the request of a Japanese partner but which she felt divided her attention. The new line is priced somewhere in the middle of the old extremes, with jeans retailing around $195 and a tailored wool jacket at about $650, currently selling at stores such as Barneys New York, Bruce in Vancouver and Blake in Chicago, and possibly in some overseas accounts next year. She’s gotten this far thanks in large part to connections that have remained loyal fans over the years, including an agent in Hong Kong who is willing to take smaller orders than is customary, and who even encourages her sewers to place a few extra personal orders to help beef up the designer’s numbers.

Although Kerrigan is on track toward restoring her fortunes, she’s not out of the woods just yet.

“People think, ‘Oh, Daryl K, she doesn’t need our help,’” the designer said. “People used to think we were really big, that we were a $35 million company, but we were never that big, we were maybe a $10 million company. But it’s a testament to our will that we’re still here — designers who keep coming back just because they love what they do. It means enough to us that we didn’t just go away.”