An earlier date did not boost visitor numbers at MilanoVendeModa as its organizers had hoped, though most executives exhibiting reported increased sales. 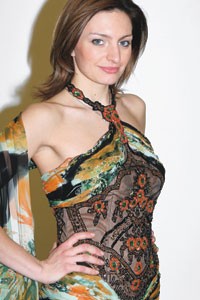 MILAN — An earlier date did not boost visitor numbers at MilanoVendeModa as its organizers had hoped, though most executives exhibiting reported increased sales.

The event at the Milan fairgrounds, which ran Feb. 10-13 — two weeks earlier than usually scheduled so it would be at the start of the European trade fair season — attracted 252 exhibitors, down slightly from last edition’s 274. Visitor numbers also fell to 8,000, down from 9,149 at the February 2005 edition.

Despite the drop in buyer numbers, most vendors were enthusiastic about orders garnered at the fair.

“I was skeptical about the new dates and had little faith that we’d get buyers coming, but I have to say we haven’t enjoyed a fair as good as this in 10 years,” said Riccardo Collina, marketing director of Italian ready-to-wear producer Ensemble by Camalgori, set up in the so-called Light section of the fair. Collina said more Japanese and Korean buyers visited his stand during MVM, many armed with increased budgets to buy fall-winter 2007 collections.

Emanuela Forlin, manager of MVM for organizer ExpoCTS, said the earlier dates would be reexamined for the next edition.

“We will see if this anticipation works well for our clients, but so far we’ve had positive reactions,” Forlin said. She added there was also a possibility MVM would join with other Milanese rtw fairs White and Neozone. “Together, it could be a strong, complementary fair and a good thing for the market, but nothing is confirmed.”

Sabrina Nespoli, European sales manager for French brand Irene Van Ryb, said she hoped MVM would join with White as MVM sales had been slow for her company in the past few seasons. She said Van Ryb had started to explore other, newer European fairs in an effort to acquire new clients. Van Ryb’s collection features natural yarns and fabrics — including printed graphic silk blouses, a wool and metal mix check jacket and angora in petrol and mustard for knitwear.

In the Trend section, Tricot Chic wooed many Italian clients with its mix of styles that included oversized wool cardigans in cream trimmed with fox collars, embroidered and ribbon-decorated folk-inspired long skirts and red fox-trimmed bolero jackets to go over silk dresses. Flavio Nava, Tricot Chic’s general manager, said though the stand received many Italian visitors and lots of orders, he wasn’t completely satisfied with the quality of the shops the visitors represented.

This story first appeared in the March 23, 2006 issue of WWD. Subscribe Today.

“It’s a shame, but we do get a lot more international visitors of higher quality in other European fairs, like Bread and Butter in Barcelona. It could be really interesting for Milan to combine all of the rtw fairs, just as the Italian textile fairs have been combined,” said Nava.

A newcomers to MVM, Danish rtw brand Jackpot decided to come to the fair for the first time to continue building in the Western European market. A division of Copenhagen-based IC Companys, the 32-year-old brand has already established its presence in 23 countries, amassing sales of 70 million euros, or $84 million at current exchange, last year. Export manager Heidi Svarre said after Jackpot entered the Canadian market last year, it was contemplating opening doors in the U.S.

Svarre said the brand had attracted many buyers at MVM because of its bright mix of garments — including a mustard crocheted angora shawl, striped pom-pom trimmed scarves and violet fluted corduroy skirts. “People are stopping because the trends here are predominately black and white,” said Svarre.

Also in Luxury, Musani presented a line of eveningwear utilizing printed silk chiffons and embroidery. Director Jack Musani said fashion’s new obsession with sophistication had helped sales for the brand. He cited an ivory dress with a full skirt trimmed with black lace and ribbons as a bestseller.

One retailer, Caterina Nordstrum, an owner of QC, a luxury boutique located in Sweden, said, “We’ve been going to MilanoVendeModa for the past couple of years to find niche, interesting brands that aren’t sold already in Sweden. We sourced some great fur and leather coats there as well as eveningwear — which is becoming an important division of our boutique.”