Closing Berlin's official lineup with a powerful collection, Dawid Tomaszewski was inspired by the often melancholy Fado music of Portugal. 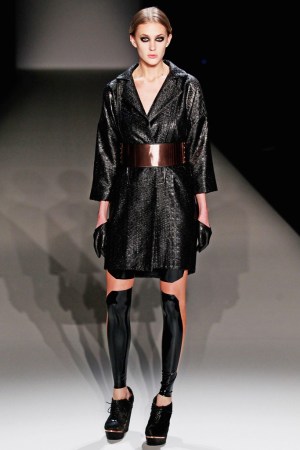 Closing Berlin’s official lineup with a powerful collection, Dawid Tomaszewski was inspired by the often melancholy Fado music of Portugal, and also said he wanted “to release his black energy” after his backer pulled out last year. Slinky gowns and well-cut coats and capes in almost all-black were anything but basic, while copper accents glowed as decorative tiled triangles on the back of garments, and in belts both slim and mega-sized that pierced and cinched flowing silk gowns and tough yet ladylike dresses. Some pieces were worked in Latex, such as leggings, a bustier bodysuit and a kinky trench that used both the shiny and matte sides of the material to good effect. Ebony feathers were formed into fleurs du mal neckpieces on a cocktail dress and on the last look, a show-stopping webby crocheted cape that gleamed with onyx-toned Swarovski crystals.