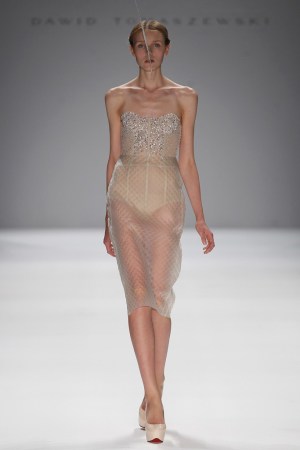 Titled “Metamorphosis,” this collection often took its theme literally. Consider a ladylike sheath in quilted transparent Latex, the bodice studded with Swarovski crystals. Or the pupa cocktail dress — for those willing to go through the evening in a pre-hatched, armless state.

Tomaszewski has a penchant for drama, which has made him an editorial darling in Germany. His signature strapless gowns require yards and yards of fabric — this season a Portuguese tile-inspired print in deep burgundy. Sheer white silk was also put to flowing effect in a simple A-line dress, short in the front with a parachute’s worth of train in the back. There were also subtly detailed and more accessible looks. As for the men’s wear, the design development seems still to be in its nascent stages.