The powers behind the (dressing room) curtain. 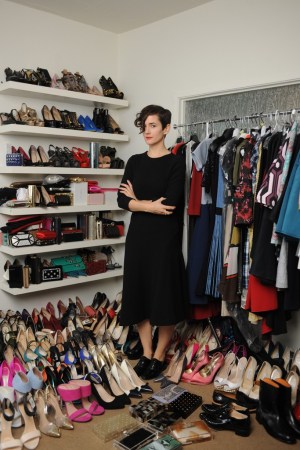 There’s no denying that stylists are major power players in the red-carpet game; they determine which designer dresses end up on which celebrities. It’s like many other jobs in the fashion and entertainment industries: glamorous-sounding and creative, difficult and demanding. And until recently, strictly behind-the-scenes and often thankless.

That changed when last year’s Best Supporting Actress and overnight fashion star Lupita Nyong’o called out her stylist, Micaela Erlanger, when fielding questions about her pale blue Prada gown, then went on to credit Erlanger via Instagram and Twitter (Nyong’o has over 1.6 million followers).

“Lupita from the beginning was very quick to credit Micaela. It’s the first time I’ve seen that happen. And I’ve never seen a stylist catapulted to such recognition. Not since Rachel Zoe,” says Bryan Smith of The Wall Group, Erlanger’s and Zoe’s booking agency. “It definitely pushed styling to the forefront and illustrated how they help shape a star’s public persona.”

“Stylists play a part in ‘image-making’ because they’re creating the looks that get in the magazines and media. Certainly no filmmaker is going to hire off the basis of a photo, but it’s part of it. If a filmmaker is looking to be introduced or wants to investigate someone’s work, it helps to have your image out there beforehand,” says manager Molly Madden, whose clients include Best Supporting Actress nominee Patricia Arquette.

Designers too, are quick to acknowledge those who help get their creations on stars. “I love the stylists. Without them, I wouldn’t be here,” says Giambattista Valli at a recent Hollywood dinner in his honor, attended by stylists Petra Flannery, Elizabeth Stewart, Karla Welch and Ryan Hastings. Another red-carpet favorite, Elie Saab, invited nearly every stylist in town to a dinner he threw last fall to mark his first trip to Los Angeles.

This year’s breakout star and Best Actress nominee, Felicity Jones, is just as candid about her stylist. “I have help, absolutely. I work with Karla Welch, who is great. It’s so collaborative,” she notes of their year-and-a-half partnership. Indeed, Welch, who began working with Hailee Steinfeld during her Oscar-nominated season in 2011 (for True Grit), has emerged among a new breed of influential stylists who view themselves as collaborators rather than arbiters.

“I’m not guided by publicists or managers. When you get to a certain place, you have a trust with your client that’s the purest translation of what a stylist-client relationship can be,” says Welch, who has a low-key, cool-girl vibe with her cropped hair, ripped jeans and slip-on sneakers. “With Felicity, we are true collaborators. We talk about every look and we really think out the process. There’s a lot of back-and-forth, which is fun and ultimately what you hope for.”

Adds Jones, “It’s like any organization, where working with good people is what you rely on. And those relationships are always so much better when they understand what you are saying in like, three words.”

Welch also likens her job to that of a sartorial guardian. “I’m never not in the room for a fitting. I’m not going to send a girl off with someone else and the designer because we are their advocates. It’s the difference between a regular woman and a runway model. You can see it sometimes happen at the Met Ball when you’re like, ‘Oh, the stylist wasn’t involved with that one.’”

As far as pleasing everyone, Welch is a realist. “The only thing I say to my clients now is, ‘How did you feel when you put it on and walked out the door?’ I don’t care how it felt on a Monday after the reviews came in. If you felt amazing going out, then we achieved our goal. Lists are so arbitrary. It’s nice to be on them but it just doesn’t matter to me,” she says.

But there must be pressure? “Of course, especially this time around, because the women being honored are such fashion plates. The Oscar dress is pressure because that’s the grand finale. You have to map it out from the Golden Globes to SAG to BAFTA to the big wow at the end.”

And for those who assume that Jones has a deal with Dior: “There’s no contractual relationship at all; we are friends,” says Welch. “They made her a dress and she wore it to the Globes but there’s never an obligation. We have a multitude of designers and we gravitated to them.”

Jones notes of the Dior looks she has worn, “It’s just something that feels right. They are beautifully designed clothes, and I love the craftsmanship that goes into them.”

Welch pipes in, “You’ll be surprised by what she wears to the Oscars.”

Welch loves new designers such as Prabal Gurung, which Steinfeld wore to the Golden Globes. She also lets her instincts guide her. “Stylists see collections that no one else sees. Most designers have off-runway VIP things. When Valentino sent a sketch of the black and white dress that Olivia Wilde wore to the Oscars [last year], I just knew. Same with the J. Mendel Elisabeth Moss wore when she won her Globe. It was the first dress we tried.”

Ilaria Urbinati, who dresses Oscar nominees Bradley Cooper and Laura Dern, offers that for clients without designer deals, being nominated can be overwhelming. “The day Laura got nominated, I got an e-mail from what seemed like every designer living about making her a custom gown.”

Fashion houses, especially those without nominees locked into contracts, seize upon free agents like Dern via their stylists. Urbinati is known for letting her clients’ personalities dictate their choices. “You’re not going to see Laura in a princess gown. She’s more effortless so we’re going for a cooler, sexy vibe because I want to make sure she looks like herself.”

Dern, who said that she chooses to enjoy the dress-up moment rather than stress out.

“I love that Ilaria has an artistic eye. She is brave and bold and likes to have fun so she’s not focused solely on a reverence toward great designers or who is ‘popular.’ She focuses on the art of fashion design and being creative with colors, and in this case, she  considers the actor she is dressing. You like to dress for yourself, especially if you play people different from yourself. It’s another opportunity to be you, not the character. Ilaria understands that.”

As for who foots the bill for styling services, it usually falls to the movie studios, as such costs are part of a film’s marketing and publicity budget. Stylists can be paid thousands of dollars per look or event. But, says stylist George Kotsiopoulos, “There’s no regulation. We’re not unionized. If you are working with an A-list actress and the studio won’t pay, you’re probably going to do it anyway, because there are other stylists who will do it for free.”

For many, the cachet of styling an A-list star can be worth the time and costs that come with it—tailoring, assistants and studio space. “It’s like editorial work. It’s prestigious but doesn’t pay a lot. That’s why you do commercial stuff,” says Kotsiopoulos. “It’s the same reason Academy Award-nominated directors are doing commercials and television shows.”

Like their clients, stylists can spin sartorial star turns into other sources of income. Zoe is a crowning example of one who turned a celebrity dressing gig into a mini fashion and beauty empire (her businesses include a clothing line, her own styling agency and a blow-out chain), but others include Kotsiopoulos, who parlayed onto E!’s Fashion Police for one season and has a deal with Old Navy; Kate Young and her collections for Target and Buffalo David Bitton, and Leslie Fremar and Fruit of the Loom. Erlanger used her moment in the limelight to snag a Maidenform deal along with two more Oscar-winning clients, Jared Leto and Hilary Swank.

THE VIP TEAMS
In-House
Along with flagships in L.A., these brands have celebrity-dressing staffers who are on every stylists’ speed dial. Beyond hotel room fittings and house calls, they help curate red-carpet-only pieces and liaise with potential brand ambassadors.