De Beers is adding another facet with its first collection of one-of-a-kind diamond pieces that cost as much as $200,000. 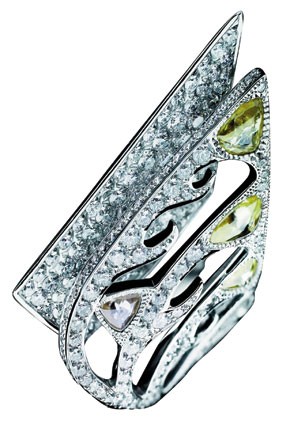 NEW YORK — De Beers is adding another facet with its first collection of one-of-a-kind diamond pieces that cost as much as $200,000.

The 12-piece collection, called The Valley of Diamonds, which launched Monday at Alain Ducasse’s Adour restaurant here, was a year in the making and De Beers is looking into doing more like it.

“It’s quite a new [venue] for us,” said chief executive officer Guy Leymarie, adding that demand for important diamonds, namely those more than 10 carats, is high and supply is dwindling. “We’re coming back to this tradition of jewelry that should be very unique pieces. This is the nature of our business.

“Diamond prices are going so high and so fast that the customer is not always prepared to see this change on the market, but it doesn’t stop demand,” he said. “The shortage of supply has to face an unprecedented demand in the world. A diamond above 10 carats is an appreciable investment.”

The collection, designed by creative director Raphaele Canot, takes inspiration from the myth of a mysterious Indian valley that is studded with diamonds, celestial flowers and a Mahua tree that grows magical fruit — but is guarded by walls of fire, birds of prey and poisonous snakes, including a king cobra.

The story goes that a benevolent phoenix could make it through the obstacles and deliver the largest diamond in the valley, known as the Myth, to a person who is “pure of heart and spirit,” according to De Beers. It is hypothesized that the mine is actually the Golconda mines in India. Alexander the Great was said to be in search of the place his entire life, believing that diamonds were a cure-all.

The collection includes polished and uncut rough white and fancy colored diamonds. They are in styles such as the Follow Me ring, which depicts a curling snake with rough and pavé diamonds set in gold that sells for $30,000, and the Flames of Grace drop earrings, featuring the flames of the phoenix in white with fancy colored diamonds at $40,000.

Other standout pieces include the $175,000 Phoenix pendant, with 26.6 carats of diamonds set in the intricate wings of the mythical bird. The highest price in the collection is the King Cobra pendant at $200,000.

Despite the woes of the global economy, Leymarie anticipates the collection will be sold out by the time it reaches London. It heads to its soon-to-be opened store in Tokyo’s Ginza at the end of the month, then for two to three weeks each it will be displayed in De Beers’ New York and Los Angeles stores. The display case is a special trunk with a video illustrating the legend.

Leymarie said that there has been a slowdown in less expensive, accessible jewelry with prices starting at about $1,000. The slowdown has started in Tokyo, where the firm is opening a flagship in the next few weeks. De Beers is also opening a store in Dallas at the end of March. Its top performing units are New York, London, Dubai, Hong Kong, Houston and Washington.