Loulou de la Falaise is bringing her eye and French style to a diffusion jewelry line. 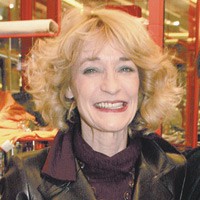 “I noticed whenever I introduced a more accessible design, it would sell immediately,” the designer said, spreading out her beaded creations on a table at her Left Bank atelier.

Some of the creations feature the line’s leitmotif — a wolf clasping a fake pearl in its mouth. De la Falaise chose it because the French word for wolf is loup, which, when pronounced, sounds like “lou.”

Jewelry already accounts for about 40 percent of de la Falaise’s business, which she launched in 2003, and she said she expects the diffusion line to help her reach a broader audience through a wider distribution. In addition to her two boutiques in Paris, the designer sells her collection to about 20 doors scattered across Europe, Africa and North America.

The designer said she chose to produce more affordable products because of a growing resistance from customers to paying large sums for fashion. And when it comes to fantasy jewelry, why not cater to a younger crowd and offer impulse prices?

“A diffusion line is also an opportunity for a designer to play out ideas on a smaller scale,” said de la Falaise.

De la Falaise added that all the jewelry has to be easy to wear and fun, but never cheap-looking.

The looks include lightweight strands of translucent beads, lacquered wood beads and tiny glass beads, as well as precious stones, and vibrantly hued strands pinned with flower and butterfly brooches, or dotted with ladybugs. The designer also plans to add fabric bags and home objects to the line.