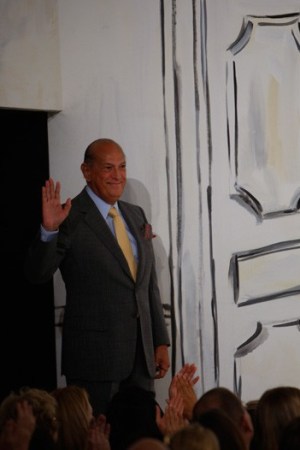 Opera! Fashion! Flag-waving! An empty seat (at least metaphorically) where a giant of New York society should be!

By the time the curtain rises on the Metropolitan Opera’s opening gala on Monday night, the drama already will have started. That’s because a certain longtime fan of the Met, who’s also a proud naturalized U.S. citizen with a New York-based business, will not be in attendance at the event for the first time in 20 years or so, and he’s not staying away quietly.

Oscar de la Renta was none too happy to learn that Renée Fleming’s onstage frocks for the affair were designed by Karl Lagerfeld, John Galliano and Christian Lacroix. “If this were the French opera, would they be asking three American designers?” de la Renta fumed. “This is not a personal thing that I should have been one of the designers, not at all. But I think that American fashion should have been represented.”

“Americans work at the Met all the time,” countered Peter Gelb, the Met’s general manager. “It’s just that we do not wish — I do not wish — nationality to be a reason for choosing or not choosing somebody.…We are not working on some sort of a quota system.” (He added that, for the first major production under his watch, “Madama Butterfly” in 2006, Han Feng did the costumes.)

When de la Renta got wind of the perceived slight, he expressed his discontent in a phone call to Mercedes Bass, who in turn called Gelb, who in turn called de la Renta to state his case. It didn’t go well. “I explained to him that I don’t really think about nationalities or anything other than artistic appropriateness when we’re making decisions about directors or designers,” Gelb said. “The Met’s a global opera company and we work with designers and directors from this country and from Europe and from Asia. It just never really crosses my mind about where a designer is from when we decide to work with them. It just seems, in this particular case, that the designers who we asked to participate were the right ones.”

By Oscar’s lights, it was a double whammy, one that “added more salt to the wound because what [Gelb] is telling me is that the American industry and American talent is not as good as the one he can get from Europe.” De la Renta insisted that at least one of Fleming’s costumes should have been homegrown. Besides, he mused, if the Met chose to go with well-known fashion designers, why be so expected? Why not bring a younger look to the event? He suggested Marc Jacobs, Alexander McQueen and Dries Van Noten.

In defending his choices, Gelb noted that the gala designers were deemed to “have the right kind of spirit and feeling for this particular project.” He cited their senses of fantasy, and said the Met is very fortunate that each agreed to take part. Asked whether in retrospect it would have made sense to include an American, since the three are from fashion and not the traditional costume world, Gelb didn’t flinch. “I’m not really thinking about designers in terms of what type of designer work they’re doing, whether it’s ready-to-wear or not. I mean, we’re a performing arts company, we’re not a boutique,” he said.

Enlisting Lagerfeld, Galliano and Lacroix is part of a larger effort to revive the Met tradition of collaborating with stars from the outside design and art worlds. He noted that such luminaries as Marc Chagall and David Hockney have done work for the Met, and that he has sought to revive collaborations “in a significant way.” Next season, South African artist William Kentridge will design and direct Shostakovich’s “The Nose,” and Beijing National Stadium (the Bird’s Nest) designers Jacques Herzog and Pierre de Meuron will design the production of Verdi’s “Attila,” which marks the Met debut of Riccardo Muti. “So the Met is very interested in crossing the line, certainly under my administration, into all different areas of artistic endeavor.”

For his part, de la Renta has no argument with such big-picture efforts. “Peter Gelb is a very, very talented man and I see that he is trying to do all the right things for the Met….He is trying to bring a new audience to the Met. I applaud him for that,” the designer noted.

But at least for now, de la Renta is miffed, and he’s expressing his dissatisfaction in more ways than one: Mr. Gelb, you know that check Mr. de la Renta writes out every season? It’s not in the mail.

“I thought the check had been sent out,” de la Renta said. “When I talked to the office yesterday, they said yes, the check is still here. So I said, ‘Don’t send it.’