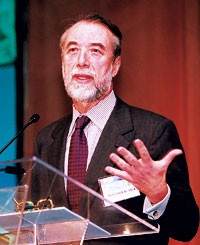 PARIS — Domenico De Sole took his final bow as Gucci Group’s chief executive Thursday by delivering fourth-quarter operating profits for the Gucci brand of $206.4 million — an amount that matches total revenues of the derelict luxury brand in 1993, when De Sole moved to Italy and embarked on a legendary rejuvenation campaign.

“I think the company is moving in a strong direction, and Tom [Ford] and I leave it in a really healthy situation,” De Sole told WWD. “I am generally optimistic [about 2004]. Gucci continues to be a real superstar brand.”

But the results fell short of some analysts’ expectations on the day when Pinault-Printemps-Redoute launched a $3.17 billion tender offer for the 32.4 percent of Gucci it doesn’t already own. Merrill Lynch analyst Aymeric Poulain downgraded PPR stock to “sell,” saying the Gucci results suggest “the expected recovery is not coming as fast as previously anticipated.”

He noted that Gucci, Yves Saint Laurent and YSL Beauté all undershot expectations.

Still, De Sole characterized Thursday’s results as indicative of “a strong end of a difficult year. I’m proud to say we are the only luxury brand with double-digit growth in Europe. The performance of the Gucci brand has been pretty spectacular.”

He cited no evidence yet of a so-called “Tom Ford effect,” but predicted customers would likely want to rush in and collect items from Ford’s swan song collection. “We will probably see that this fall,” he noted.

Slated to exit his post at the end of the month, De Sole said he plans to take an “open-ended vacation” as he relocates from London with his family to a new home in South Carolina. Asked about his future, he replied: “I don’t have any long-range plans.”

But he did not close the door on an eventual return to the business — or even a sequel for fashion’s dynamic duo.

Ford, who hopes to direct a film in his post-Gucci career, told WWD earlier this week he is already mulling a return to fashion. “That doesn’t mean tomorrow, but it could be a year from now,” he said.

Asked if he might also get back into the business sooner rather than later, De Sole said, “I’ll be in touch with Tom. It would be an honor for me to work with him again.”

During the conference call, De Sole was composed and unemotional, but he confessed to some anxiety. “Gucci has been a major part of my life for more than 20 years. The separation will not be easy,” he said.

While sidestepping questions about how the company should proceed without him, De Sole echoed Ford’s comments about the four internally recruited design successors: Alessandra Facchinetti, Frida Giannini and John Ray for Gucci, and Stefano Pilati for YSL. “I know these designers very well,” De Sole said. “Tom and I hired them and they are all superbly talented. I’m confident they will be successful.”

One of the most driven ceo’s in luxury, De Sole acknowledged some disappointments in Thursday’s results.

Operating losses at Yves Saint Laurent widened for the full-year to $94 million, or 76.4 million euros, versus $79.7 million, or 64.8 million euros, in 2002. During the conference call, De Sole noted that the communication spend, which includes advertising, stood at 18 percent of sales last year in support of the brand’s “launch phase.”

De Sole declined to give a target date for YSL to break even, saying it would be “inappropriate” given his imminent exit. But during the conference call, he said losses had “peaked” last year and offered some counsel to the new management. “My advice would be to stay the course,” he said. “Tom has done a sensational job repositioning the brand and I think YSL will turn out to be a great success.”

De Sole noted that YSL Beauté had “a difficult Christmas” and incurred “huge” expenses in support of fragrance launches earlier in the year by Stella McCartney, Alexander McQueen and Ermenegildo Zegna. He also blamed aggressive advertising by competitors for a 21.2 percent slide in fourth-quarter operating profits to $13.8 million, or 11.2 million euros, versus $17.5 million, or 14.2 million euros, a year ago. Sales slipped 3.5 percent to $191.4 million, or 155.6 million euros, or a 0.2 percent decline in organic terms.

Losses for the group’s emerging brands narrowed in the quarter to $15.4 million, or 12.5 million euros. And while the Gucci brand remains the main cash cow, De Sole said he still believes strongly in the multibrand model that compelled it to buy Bottega Veneta, Boucheron, Alexander McQueen, Stella McCartney, Sergio Rossi, Balenciaga and Bedat & Co. “They’re all very good brands,” he said. “Some of them are going to turn around more quickly than others, but this is normal.”

But De Sole held out special praise for Bottega Veneta, saying history will show that it was the “best and most successful” acquisition the group ever made. “In March, Bottega was up more than 60 percent worldwide,” he said. The leather goods specialist, famous for its woven handbags, is not yet profitable, but “moving toward profit at the speed of light,” De Sole added.

The company cited strength in all regions of the world, with organic sales advancing 25.2 percent in the U.S., 25 percent in Asia, 13.5 percent in Europe and 8.5 percent in Japan. By category, retail sales of leather goods and shoes rose 21.2 percent and 13.2 percent, respectively, in organic terms.

Citing strong sales of its Saint Tropez and Mala Mala lines of handbags, Gucci said leather goods represented 45.4 percent of group revenues at constant currency in the quarter, up from 38.5 percent a year earlier.

Luxury analyst Jacques-Franck Dossin at Goldman Sachs in London deemed it a “good quarter in profitability terms, even if a bit softer in terms of sales. We believe these results are unlikely to affect Gucci’s share price.”

Separately on Thursday, Gucci Group said it would host an exceptional shareholders’ meeting April 21 in Amsterdam to discuss PPR’s tender offer, launched Thursday in the U.S. and today in the Netherlands. The meeting is being convened in accordance with Dutch law, but no votes or actions are scheduled.

An announcement of the new ceo that day is seen as a possibility, but PPR said that De Sole’s successor would be named before the completion of the tender offer at the end of April.

In an interview with French business daily Les Echos published Thursday, Artemis chairman François-Henri Pinault said two candidates remain in the running, each with an international profile, solid financial background and “a good understanding of the luxury sector in its creative dimension and strategic brand marketing.”