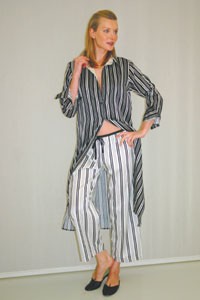 NEW YORK — Lingerie manufacturers and designers anticipated the January market would be among the most challenging in years — and they were right.

Not since 1990, when mergers and acquisitions began sweeping the industry, has there been such angst over producing newness, innovation and best-selling product. The main reason is the Federated-May merger, which will significantly tighten major department store channels. It also is likely to leave branded resources that have benefited from their relationships with both chains in a tenuous position if the retail conglomerate accelerates its private label programs and consolidates its matrix of brands.

“There are a lot of jitters out there,” said an executive who sells to Federated and May stores and did not want to be identified. “People are trying to educate themselves on how to deal with all of this consolidation and not turn off any retailers. The problem is there are not too many retailers to pick from these days. Kohl’s may have half of the brands on its floor and Federated the other half. And there’s a Dillard’s out there that’s trying to differentiate itself, maybe looking at resources it never has considered before.”

Howard Radziminsky, senior vice president of sales and merchandising at Movie Star Inc., said, “We did sell and do sell both Federated and May stores. The Federated-May merger affects us from a product point of view because they both buy our [Cinema Etoile] lines. Some buyers are looking and saying ‘I’ll buy for Federated doors the way I always have, and buy for May doors differently.'”

Also well positioned are contemporary daywear items by names, including Josie and Baby Phat Intimates by Kimora Lee Simmons and new brand launches like contemporary sleepwear and loungewear by Donna Nadeau at The Komar Co. and Fayreform full-figure bras at Elle Macpherson Intimates. Continuing the momentum with new color palettes, styling and innovative fabrics were Wacoal bras, robes and sleepwear at Karen Neuburger and WillowWear and Cypress at Russell-Newman.

Vendors pushed the envelope on newness and innovation because they believe the future is bleak for firms that make basic merchandise that retailers can replicate as store-owned labels. The categories most at risk of being cannibalized into private label are sleepwear, robes and at-homewear, primarily because creativity has been lacking at a majority of innerwear firms. As a result, private label sleepwear is estimated to make up 70 percent of offerings at Federated stores, industry experts said.

However, there’s another twist to the vendor-retailer drama. A key question troubling suppliers has been how to present collections and essential items that are different and special — not mass distributed to Federated’s 850 department stores nationwide — to stores such as Nordstrom, Neiman Marcus, Saks Fifth Avenue, Bon-Ton and Carson Pirie Scott.

“Cypress [robes] grew its business 47 percent in ’05 without Federated business,” Martino said. “We carved out our little niches through product innovation and we cut the supply chain economies by half, such as finding faster, more economical ways to get boats to the West Coast and third-party warehousing.”

Martino said the company is ready to address the needs of Federated stores with a contemporary line of sleepwear called Pink Chiffon by Willow Creek. The line features updated pajamas in plaids, dots and stripes, as well as a five-pocket jean silhouette in corduroy with pom-pom trim.

“It’s targeted to Federated and has received very good reaction,” he said.

Radziminsky of Movie Star said the company plans a “big expansion” of a flat-packed, ribbon-wrapped pajama gift set with a gift card for fall. The three-piece gift sets of cotton rib knit will include novelty-print long and short pajama bottoms and a screen-printed and embroidered top.

“We expanded the pajama gift program because it generated 90 percent sell-throughs for Christmas,” he said.

Jessica Mitchell, senior vice president of merchandising and marketing at Natori Co., said reaction has been strong to lace-trimmed blends of cotton and Modal in the Natori, Josie Natori, Josie and Cruz collections. Other new classifications Mitchell said received “excellent” reaction were mesh and polyester interlock knits that coordinate with slinky polyester jersey, Asian floral prints and what she described as “BB satin.”

“The collection is definitely for the woman who is looking for the finer things in life, whether its beautiful fabrics or updated styles,” said Nadeau, adding that the lifestyle statement includes coordinating ballet slippers, lap blankets and a travel pillow. “The message is relax, luxuriate, be comfortable with yourself.”