DALLAS — The $4.4 billion women’s retail outerwear business is expected to grow at least 3 percent from now until 2007 thanks to basics, fashion and stores’ creative approaches to building the category. 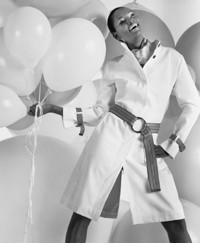 DALLAS — The $4.4 billion women’s retail outerwear business is expected to grow at least 3 percent from now until 2007 thanks to basics, fashion and stores’ creative approaches to building the category.

In the shorter term, last week’s arctic temperatures in the Northeast helped direct serious coat shoppers to the Lands’ End Web site, but that was not the case at brick-and-mortar Burlington Coat Factory.

Last week, sales picked up for its squall parka after it was marked down from $100 to $69, a Lands’ End spokesman said. In addition to the price, the garment’s hip length and fleece lining appealed to shoppers looking for some relief from the cold. Lands’ End also has seen sales climb for hats and gloves, the spokesman added.

At the same time, sales slipped at Burlington Coat Factory, due partially to snowfall and frigid temperatures in the Northeast that curtailed store traffic. Most daily sales were off “slightly,” except for Thursday, the day after the snowfall, said president and chief executive officer Monroe Milstein. “The snow killed it altogether,” he said.

Those who were shopping at Burlington were diverse about their selections.

“Down is the leading category, but when it’s cold, we sell all kinds of coats,” Milstein said. “Wools were selling and they weren’t the biggest sellers of the season.”

Looking at 2004, retailers are expanding outerwear departments and approaching the business as a vital year-round opportunity. Many stores are out-posting coats within fashion apparel departments, with the cross-merchandising aimed at appealing to a wider range of shoppers and inspiring multiple-item sales. Consumers are also increasingly turning to catalogues and the Internet for their coat purchases.

According to Mintel International Group, a Chicago-based media, product and consumer research firm, retail sales of women’s outerwear will remain unchanged at current prices and rise 3 percent annually at constant prices through 2007. By category, basic outerwear sales are expected to rise 21 percent over that time, while fur sales are projected to rise 16 percent. On the other end, leather coat sales are forecast to drop 20 percent.

The outerwear gains are expected to increase largely because of interest from teens, older consumers and fashion shoppers.

“Coat sales will be dependent on replacement purchases, and potential sales growth from a rising population will be offset by the continuing downward trend in apparel prices and more value-conscious consumers,” noted a Mintel report, which is distributed by Marketresearch.com, based in Washington, D.C.

“Many women take a pragmatic approach to buying outerwear, with over 80 percent agreeing that how well a piece protects from the elements is more important than fashion, and over half indicating that price is the most important factor in buying a new outerwear garment,” Mintel said. “Women also appear to have most commonly purchased a basic coat or jacket in the last 12 months. In addition, most women surveyed had purchased their most recent outerwear garment from department stores, with discount and outlet stores coming in a distant second.”

Stores said 2003 sales were mostly ahead by less than 5 percent, though a few reported double-digit gains. But they’re still faced with a medley of challenges to maintain the momentum in 2004, including staff training, offsetting markdowns and promotions, improving store presentation and inventory issues. There will be a greater emphasis on balancing stock to reflect the right ratio of basic and fashion styles, depending on demographics and geographical area, as well as hitting the right fashion trends and making sure that vendors can provide quick replenishments for bestsellers.

Among the trends expected to be strong this year: embroidery, beading and embellishment, fur and leather trim, shearling and a spectrum of colors.

Neiman Marcus expects its coat sales to grow in 2004 thanks to a focus on items and fashion trends, and intensified training of management and sales staff, said Terry Thornton, divisional merchandise manager.

Neiman’s recently produced a CD-Rom featuring outerwear trends and key inventory, and gave a copy to each of Neiman’s 35 store managers, who in turn are presenting the CD to store sales staff.

“The training and trend CD was very well received among our staff,” Thornton said. “They really liked the educational approach. The presentation instills in our staff what’s in store and in turn gives them knowledge to pass on to our customers.”

Neiman’s also continues to spotlight outerwear in its The Book and Little Book catalogues.

“Many shoppers are also buying outerwear with less interest in weather and more on style and fashion. It’s a move away from a generalist point of view toward an end-user point of view. Women are buying outerwear for each aspect of their lifestyles,” said Thornton, who said fake furs, leathers, sportif styles, novelty and shearlings remain top trends.

“We continue to look for freshness in the designer marketplace and I’m especially looking forward to seeing the launches of several new lines this year, including Oscar de la Renta’s outerwear line, Burberry Cloth and the relaunch of the CK coat label this fall,” Thornton added.

Elizabeth Kanfer, market editor for Saks Fifth Avenue, said, “We are offering outerwear for every aspect of a woman’s lifestyle on a year-round basis. We have a huge representation of outerwear throughout our stores. It’s not limited to one department.”

The 62-unit operation is trying new strategies. This winter, Saks is pushing regular-price coats and holding off on markdowns longer. This spring, rainwear is being expanded with more colors, silhouettes and novelty treatments. Saks plans to break outerwear in August rather than September, so women can snap up hot styles before they’re sold out.

“Women already have the basics. They want something new,” Kanfer said. “It’s just like changing handbags.”

Searle is buying a wider range of styles, labels and colors for fall-winter 2004, and is projecting sales to climb at least 20 percent, also due in part to the chain’s renovation and expansion of all its stores, including the outerwear departments.

“We devote up to a third of our stores to outerwear during the winter, and most of our styles are branded,” he said, citing current bestsellers such as Bogner, PostCard and Moncler among them.

Henri Bendel believes in cross-merchandising outerwear with fashion apparel and this strategy inspires impulse purchases and boosts multiple sales, according to Alyson Growitz, coat buyer, who said outerwear is expected to post gains in 2004.

“Cross-merchandising is one of the ways we keep the outerwear offerings vibrant, exciting and new for the consumers,” Growitz said. “Novelty, especially beading and embroidery, is also extremely important, and I’m constantly searching for it in the market. Once it gets to the store, there’s always the challenge of finding replenishments, so I make sure the vendor can handle quick reorders.”

Bendel’s begins promoting outerwear in July with window displays and ads in The New York Times.

“Fashion customers want to buy early to make sure they get the styles they want. They want to take a chance on it selling out,” Growitz said. “We do an incredible amount of staff training to make sure they can answer any customer’s questions about coats.”

“Outerwear is the last thing a woman puts on and the first thing she is seen wearing. It makes a huge statement about a woman’s style,” said Pfeifle. “We know the importance of outerwear.”

About six months ago, J. Crew began an intensified focus on outerwear and called it a growing business. “We send out catalogues to our stores quite frequently to educate our staff on important looks and trends. Coats are important in a classic as well as trendy approach to dressing.”

Mintel’s report concluded that future outerwear sales could be higher if more companies shift to traditional dress codes, necessitating more formal coats, if retailers and vendors convince shoppers to purchase coats as part of a fashion statement rather than out of necessity and if outerwear makers increase their offerings of plus-size coats and jackets.

Popular shearling styles offer classic, relaxed, hip-length silhouettes with button-up fronts and plush exposed acrylic/microfiber-blend shearing at the seam and border areas. Jacket details include turned-back cuffs, slash pockets and stand-up collars, and are available in deep shades of chocolate and black. Shearlings are priced at $99.

Also big with online shoppers have been colorful quilted jackets and coats with Teflon-treated cotton and microfiber shells that retail on average for $95. Quilted pieces feature corduroy cuffs and collars, dimensional stitch detailing and three-quarter-length hems.

Wide-wale corduroy peacoats, flannel-lined corduroy jeans jackets and traditional barn jackets have remained fast movers through the season. Peacoats are marked down to $44.95 from $69 and barn coats are priced at $29.95, down from $49.