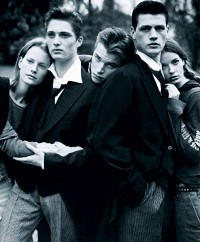 NEW YORK — In the end, it was more about the bottom line than naked bottoms.

The decision by Abercrombie & Fitch to kill its Quarterly magalogue didn’t come as a result of the threat of protesters outside its stores, but resulted from its growing failure to lure teenage customers into them. As a result, the decision was praised by analysts, who hoped the retailer now will focus on its core product problems.

As reported in WWD Tuesday, after six years and more than $100 million invested, the teen retailer decided that its iconic magalogue had become more trouble than it was worth and canceled it. The Quarterly had made Abercrombie’s name synonymous with the neo-preppy look of its clothes and the All-American perfection of its models, but its edgy tone and imagery drove critics (and there were many) over the edge. Once its naturally fickle customers cooled on the brand, reflected in steady declines in same-store sales, the Quarterly became an albatross — an immensely unpopular icon using sex to sell to teenagers, who had already decided that A&F was no longer cool anyway.

A&F would do well to do something to bolster store traffic. After plunging 13 percent in November, comparable-store sales have declined in 39 of the last 46 months. Moreover, they have fallen in 21 of the past 24 months — with one of the three remaining months producing only flat comps — and have decreased every month of this calendar year except January. And any return to growth will be hard won. As reported, teens currently are spending more on cell phones, DVDs and iPods than they are on apparel.

Abercrombie said in Tuesday’s terse announcement that it would unveil a new campaign in the spring. Analysts cheered at its executives’ willingness to cut their losses, but the company’s critics were more skeptical of its sudden change of heart. “Clothier will stop producing pornographic catalogues, but what will replace them?” asked a press release by Focus on the Family, a nonprofit organization that is one of Abercrombie’s most vocal critics.

In a sign that A&F isn’t ready to give up controversy, sources said it had retained photographer Bruce Weber and creative director Sam Shahid to work on the Quarterly’s successor, which is said to be a mainstream ad campaign that may even include television commercials. They clearly still have the approval of Abercrombie chief executive Mike Jeffries, who in the past had given the Quarterly his active endorsement.

While assorted conservative activist groups have rushed to take credit for Abercrombie’s decision, pointing to their grassroots efforts to boycott its almost 700 stores, the source said the decision had more to do with creative differences over the Quarterly’s next step. Abercrombie quietly fired its editor last week, sources said, and executives hoped this latest controversy might blow over. When that didn’t happen, the company was forced to make its announcement.

Abercrombie had steadily raised the sexual and political stakes in the last few years, culminating in the last issue’s “Group Sex” cover line and its editor’s letter, which snidely addressed the numerous groups it and its products had offended during its existence.

“We don’t want much this year,” it read, “but in keeping with the spirit, we’d like to ask forgiveness from some of the people we’ve offended over the years….If you’d be so kind, please offer our apologies to the following: the Catholic League, former Lt. Governor Corrine Wood of Illinois, the Mexican American Legal Defense and Education Fund, the Stanford University Asian American Association, N.O.W.” and so on.

“They’re all about crossing the lines,” said one Quarterly contributor, “but this time they drew a line in the sand. They were kind of asking for it.”

And the Quarterly’s original dusting of nudity — a nipple here, a few butts there — was elevated from a seasoning to a main dish. One former model said Weber and Shahid dismissed models unwilling to pose nude and said Shahid was constantly exhorting them to “act sexier” when he was on the set.

Shahid referred calls to Abercrombie’s spokesman, who declined comment. But Shahid told WWD last January that “we don’t buckle under to criticism. We feel we’re right about what we’re doing,” and “I’m not out to hurt anybody and nobody is damaged by any of this.”

Stopping A&F Quarterly became a rallying point for conservative groups and concerned parents alike. “I had encounters where parents would come to me holding up an A&F Quarterly in desperation, like, ‘Help Us,’” said Alissa Quart, author of the book, “Branded: The Buying and Selling of Teenagers.” “It became more of an emblem than anything else. It served as an icon for the hypocrisy of America’s attitude toward youth, using it as a sign of innocence while at the same time peddling a semipornographic catalogue at them.”

Shareholders and analysts were relieved to see it go, interpreting the move as an acknowledgement by management that the Quarterly had become a distraction while trying to fix larger problems.

“We believe that management’s decision to drop this controversial publication points to flexibility that should help sustain the business model on a go-forward basis,” wrote A.G. Edwards & Sons analyst Robert Buchanan in a research note to investors. “The magalogue proves highly controversial, of course with parents, and other groups, and in our view was of limited importance to the targeted consumer. We believe the decision to discontinue the magalogue will put the focus at A&F squarely back on the apparel, which is where it needs to be.”

Buchanan added he would like to see A&F “show similar flexibility on the promotional front, where it has largely eschewed promotions along the lines of those adopted by other teen retailers.”

“Whatever the reasons, we applaud A&F management for eliminating the quarterly magalogue in that it has come to be more of a distraction to the core A&F story than an intended driver of store traffic (as evidenced by three consecutive years of declining same-store sales results),” Klinefelter wrote. “With production of the magalogue on hold, we believe the company will redirect the approximate $33 million that is used for both the catalogue and advertising costs to relaunch a branding campaign this spring.

As bad as A&F’s comps have been, they could have been much worse, as strong positive same-store sales from its Hollister business have helped to buoy diminishing returns from the firm’s namesake operations. And, despite the consistently poor comp performance, at first blush, other key financial indicators look robust. Profits and sales have increased every year since 1999, as earnings per share have returned a compounded annual growth rate of 19.2 percent, while revenues have increased 18.7 percent over the same period.

However, other significant indicators remain much more troubling. A&F’s return on equity has steadily decreased in every year since 1999 when it stood at 83 percent. For the last full fiscal year, ROE was just 28 percent by comparison. Additionally, as the shrinking comps would suggest, retail sales per average gross square foot have seen sharp declines for four years running, dropping 25 percent to $379 last year from $505 in 1999.

Nor have investors been particularly enamored of A&F’s stock, which is traded on the New York Stock Exchange. One month after a 2-for-1 split in June 1999 — shares hit a five-year high of $49.69 — they went into a nosedive on expectations of constrained consumer spending in the new millennium, bottoming out at exactly $8 on May 24, 2000.