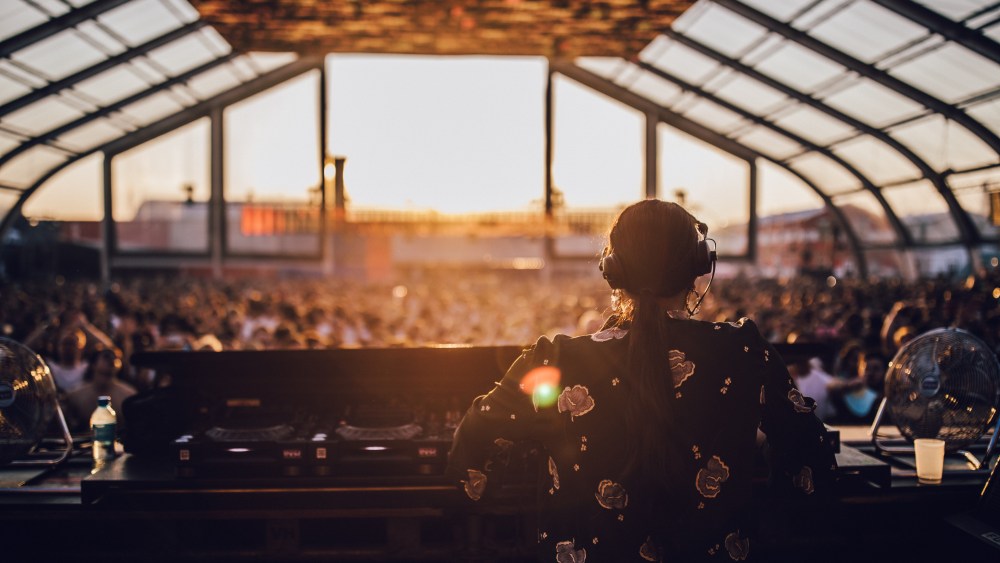 “Deejaying is the art of multitasking while reading a crowd,” says Virgil Abloh. “It’s the perfect art practice related to making fashion. I find it as a means of training my mind and instincts.”

Good luck finding a better endorsement for fashion’s growing fascination with DJs — as ambassadors, influencers and brands in their own right.

While Abloh is arguably one of the most accomplished in fashion away from the decks — with his Off-White brand, collaborations with Nike, Ikea and Mercedes-Benz, plus his role as Louis Vuitton’s men’s artistic director — more DJs are launching fashion projects.

“I couldn’t be more proud of Honey Dijon and Peggy Gou on extending their presence beyond just music, but the storytelling of their identity in their own brands. For me, it’s all a sign of modernity of fashion,” Abloh enthused, referring to Dijon’s burgeoning line with Dover Street Market Paris, and Gou’s with New Guards Group, which also holds the worldwide license to Off-White.

Simultaneously, luxury brands are unfurling playlists, with Balenciaga and Balmain among the latest making a sonic brand extension on Apple Music.

Abloh goes so far as to say, “I see fashion as a part of the music universe, not the other way around, which is probably what makes me distinct from a prototypical fashion designer. It’s all in the realm of humanity and culture. I’m very cautious of assuming from hierarchies.”

To be sure, DJs capable of igniting a dance floor with a choice track seem to be able to incite similar euphoria with the right clothes.

Take Zack Bia, a 24-year-old fixture on Los Angeles’ nightlife scene and a music producer whose Psychworld hoodies, seen on the likes of Drake, trade for hundreds, and sometimes thousands, of dollars on resale site Grailed.

The owner of burgeoning record label Field Trip Recordings, Bia spins at festivals, clubs and fashion after parties — for Moose Knuckles, Baccarat, Jimmy Choo, 424 and Nike, to name a few — and is ramping up his fashion activities.

Psychworld is hatching a holiday collaboration with BBC Icecream, the streetwear brand created by Pharrell Williams and Nigo, and Bia has partnered with a large fashion operator he’s reticent to identify, but eager to have ramp up the quality, sophistication and diversity of his product offer. He is also nurturing a second fashion brand, Puzzle in the Sky, which has a more freewheeling spirit than Psychworld’s neon, punk identity.

“I also finally locked in one of my favorite creative graphic designers and 3-D designers,” he said, demurring to reveal the name. “He’s on board, so creatively, it’ll become a lot more cohesive.”

Dijon also went from DJ-ing for Burberry and Dior — and crowds of thousands at clubs and outdoor gigs around the world — to her own fashion line, dubbed Honey F–king Dijon, launched in October 2019 with Dover Street Market Paris, a branch of Comme des Garçons that nurtures emerging brands.

“I couldn’t have dreamed of a better partner in merging dance-music culture and fashion,” said Dijon, who has widened her product offer from message T-shirts and hoodies to outerwear, sunglasses, jewelry and sophisticated leather goods. “Everything in my creative life has been made possible and formed through music and club culture. There has never been a separation for me between art, music, or fashion.”

“I believe that DJs bring a global perspective to all collaborative endeavors,” Dijon explained. “The constant touring allows you to see in real time what the kids are wearing in clubs to express themselves, experience music in different cultural settings, as well as art, food and cinema. Instead of following trends, many artists can really refine their own unique voice that can bring fresh and current perspectives to brands.”

Adrian Joffe, chief executive officer of Dover Street Market and president of Comme des Garçons International, said the HFD line is carried in about 40 doors, with Dijon’s message Ts among the bestsellers. “Be Yourself,” “We Are One” and “Legends Only” are current slogans, with the name of legendary club Paradise Garage splashed on funky tie-dye tops.

“She asked us to make her brand, and as a unique, creative, amazing person and a friend with a strong voice and a story to tell, what was there to think about?” he asked. “The success of the brand is tied to her person and her life and her vision, not only as a DJ.”

Asked what music-led creatives might bring to fashion, Joffe replied: “Just a different point of view, I guess. I don’t believe in fixed definitions and borders. I don’t think the label ‘fashion designer’ is even relevant any more. What is that?”

Bia couldn’t agree more. “At the peak of the multihyphenate age…’designer’ doesn’t really mean the same thing it once did,” he said, applauding that the “door has been broken open” for all kinds of creative people to contribute to fashion. Abloh, trained as an architect, is an example.

“Anytime you’re doing something creative, there’s obviously going to be synergy with other creative spaces,” Zia said over Zoom, rubbing his face after what was probably another late night for him. “Musical movements have always fueled stylistic movements as well.”

He echoed Dijon’s view that dance parties represent incredible focus groups and pools of inspiration. “You might have, you know, skaters and businessmen, and you have actors, and you have people in fashion and all this melting pot of all worlds. And I think being able to bring a part of that into fashion, like really having your finger on the pulse, is a nice contribution,” Bia said.

Marcelo Burlon also made the leap from the decks to clothing racks. His County of Milan brand is a mainstay of Italy’s New Guards Group, also home to the Kirin Peggy Gou brand, introduced last year.

“Everything is about music to me, so putting together a collection is comparable to making a playlist, assembling it into styled looks is like making it into a remix,” Burlon said in an interview. “Before starting my brand I was, among other things, making music for [fashion] shows: It was giving a sound to a designer’s inspirations and creating a rhythm for models to walk to. Now I do this for myself sometimes. Fashion needs music as music needs fashion — so DJs in fashion are a bridge.”

“Music is very personal and emotional and so is fashion,” Dijon agreed. “Creating a soundscape for a brand really enhances the voice of what the designer or the house is hoping to convey to its consumer. It’s an integral part of storytelling.”

Both Burlon and Dijon are pressing ahead with their music careers.

“I am currently finishing my sophomore album titled ‘Black Girl Magic’ on Classic Music that will drop in early 2021,” Dijon said. “It’s been really exciting working with so many fresh new voices in music, especially young black female singers and songwriters.”

Burlon is working on an EP with Loco Dice, a Tunisian DJ and electronic music producer. “And I am thinking about starting a radio show in Ibiza as it is such a special place for me where I have been spending a lot of time,” he added.

DJs came to the fore earlier this year during coronavirus lockdowns when countless fashion brands conscripted them to create playlists as confinement content.

The Karl Lagerfeld brand, which had invited three uber-stylish female deejays — Chelina Manuhutu, Siobhan Bell and Toki Monsta — to create capsule collections, foreshadowed the project with sets streamed on Instagram Live over the summer. Their edits of the fall collection, and exclusive hoodies and other styles with each DJ’s logo and imagery, made their debuts on Karl.com and Zalando.com last month.

Within the first 10 days of the capsules being promoted on its social channels and on Karl.com, the company witnessed “a strong uplift of around 50 percent for accessories and 30 percent for ready-to-wear,” said Pierpaolo Righi, chief executive officer of Karl Lagerfeld, explaining that the deejay capsules had a “halo effect on the entire offering that we have online.”

Righi noted that the DJ project also sent a message of female empowerment: “It was important also to partner up with strong women, women that had a clear point of view.”

That said, he allowed that fashion brands “have an amazing fit to music because it’s entertaining, it’s engaging and it speaks to people, just as art does, or photography does.…I think all these creative worlds are interconnected and somehow lend themselves as a platform for people to feel more.”

Amsterdam-based Manuhutu, who grew up on hip-hop but spins house and techno, said she was always “kind of a tomboy.”

“Some DJs, we have the luck of being massively followed, and what we wear or what we do around fashion, it affects the way our followers might see the fashion trends, too,” she explained. “People can look up to a kind of energy and vibe a DJ has and maybe wanting a little piece of that, too.”

According to Bia, while the pandemic has silenced most nightclubs, it has also sped the rise of the DJ.

According to Abloh, nightlife is simply in a “recalibration” phase. “As soon as the world recovers from the pandemic, I anticipate clubs to be back with more purpose,” he said.

In the meantime, fashion brands are leaping into the void with their own playlists on Spotify and Apple Music. Burberry, Gucci, Prada and Chanel are among the luxury names that have multiple selections streaming.

It is to host playlists chosen by Rousteing and friends of the Paris fashion house, and eventually videos, podcasts and other content, especially when Balmain works with artists on collaborations or music projects.

“Seeing music and fashion as completely intertwined just reflects how my generation grew up,” Rousteing said.

Demna Gvasalia Has Released a Playlist And It Contains Some Surprises