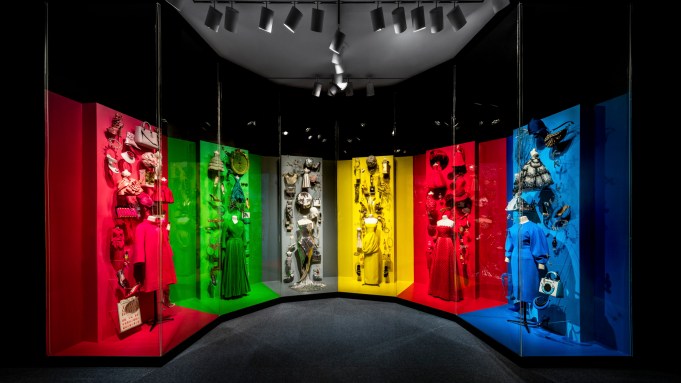 DALLAS — “Dior: From Paris to the World,” which opens Sunday at the Dallas Museum of Art, may have a French accent, but with a local twist.

In a different installation from its debut last fall at the Denver Art Museum, the show makes eye-popping use of the DMA’s 40-foot-high Barrel Vault by peopling it with 70 mannequins arrayed from floor to ceiling in a globally inspired display dubbed “From Paris to the World.”

OMA New York partner Shohei Shigematsu, who also designed the Denver show, made unprecedented use of the spacious Barrel Vault by dividing its cross shape via narrow, confined hallways. Entering the Barrel Vault from this borderline claustrophobic walkway magnifies the visual impact.

The show plays up the relationship between art and fashion by incorporating four paintings from the museum and two from local collectors. They include a Jackson Pollack mounted by splatter dresses, a Sterling Ruby abstract near looks that were inspired by Ruby and a Van Gogh riverbank scene whose palette and pointillist style is remarkably similar to the print of the adjacent dress.

The Dallas Dior show also examines the connection between Christian Dior himself and the late Stanley Marcus, who arranged the designer’s first U.S. visit to Neiman Marcus only months after the New Look collection made its debut.

“We made it sort of our own and added things that related to this community and collection, but we were building on a phenomenal foundation,” noted DMA decorative arts and design curator Sarah Schleuning in an exclusive preview with WWD.

Schleuning cocurated the show with originator Florence Müller, the curator of textile art and fashion at the Denver Art Museum.

“I am very happy that the exhibition is coming to Dallas because it is paying homage to the visionary role of Stanley Marcus,” Müller said. “He brought all these amazing people to Dallas, and it was the place to be in the fashion world — really the hottest place in the U.S. for fashion. Everybody has forgotten this.”

“Dior: From Paris to the World” is an extension of “Christian Dior: Designer of Dreams,” the 70th-anniversary extravaganza that Müller curated. That show bowed in Paris in 2017 and is at the Victoria and Albert Museum in London.

Marcus lured Dior to Dallas by presenting him with the Neiman Marcus Award. The esteemed visitor was “very shy,” according to Marcus’ 1974 book “Minding the Store,” and asked to be shown “the slums” instead of mansions on a driving tour.

“The rich live about the same all over the world; I want to see how your poor people live,” Dior said, according to Marcus’ account.

The visit marked the beginning of a friendship and business partnership. Neiman’s would go on to present a unique showing of Dior’s fall collection in November 1954 and launch the Diorissimo fragrance. Ironically, the retailer doesn’t stock Dior fashion in its Dallas stores, although it does carry the brand’s shoes and beauty products.

The exhibition is divided into similar groups as the show in Denver except that each of the house’s seven creative directors — Dior, Yves Saint Laurant, Marc Bohan, Gianfranco Ferré, John Galliano, Raf Simons and Maria Grazia Chiuri — is given an individual display of eight mannequins with related sketches and ephemera.

“We were interested in building a foundation and voicing each creative director,” Schleuning explained.

All but two of the show’s 187 looks are couture, and 32 are new to the exhibition. Most are substitutions for similar styles deemed too fragile to continue being displayed.

“Replacement is a thing we do very carefully to keep the concept of each space in each room,” Müller explained. “We are not showing the same dress but trying to stay close to the idea.”

One of them is a pale pink gown chosen because it was the color of Dior’s childhood villa in coastal Normandy and one of his favorite hues. Another is from his first collection, a dark blue silk day dress with a pleated crinoline skirt that is “very emblematic” of Dior, Müller noted.

In addition, the curators were able to add more pieces by Chiuri, including a summer 2019 tailcoat pantsuit that is shown in the section on the New Look and the black tulle “Andalusia” dress from fall 2017.

The show opens with the “Revolutionary New Look,” a gallery backlit in bright red that silhouettes 18 black looks representing all seven creative directors in the house’s 72-year history.

Arranged chronologically, it starts with the iconic “Bar” suit with its sculpted cream silk shantung jacket and pleated black wool skirt made with 33 yards of fabric. The lavish skirts in Dior’s first collection were considered so extravagant that some women took to the streets to protest them, which is documented in period photos.

“This first section builds on the idea of the ‘Bar’ suit and pulls through how different creative directors have built on or mined that idea,” Schleuning pointed out during the preview. “It starts this narrative of the idea of the house of Dior and how the work is evolutionary because it is a living, breathing entity.”

The next “Office of Dreams” galleries examine the process of couture. The first space displays 21st century white muslins arrayed on a gray wall backlit in white light. One of them, a Simons dress with a popover bodice and poufy pleated skirt, is fully realized in an adjacent room.

Flanking galleries focus on the individual creative directors, each represented by a cluster of eight mannequins with corollary materials, such as videos, sketches and swatches. For instance, the film “Easy Rider” screens next to a black leather jacket in the vignette for Saint Laurent, who was inspired by Beatniks (although the film didn’t come out until 1969, long after Saint Laurent had left Dior — and the Beatniks were on the scene).

“We did a deep dive into each of the creative directors and their ephemera to build the language of each of them,” Schleuning said.

The centerpiece is the Barrel Vault, where mannequins rise on tiers flanking the sides of a runway-like aisle. Most of the mannequins are dressed from head to toe in styles inspired by various cultures. Some of the headpieces are archival, and British milliner Stephen Jones contributed the others.

The far wall in the Barrel Vault showcases 13 styles that have been worn by celebrities, including Grace Kelly, Marilyn Monroe, Josephine Baker and Rihanna. Successive galleries focus on iconic photographs of Dior, bold color stories, 18th-century-influenced fashions and floral looks.