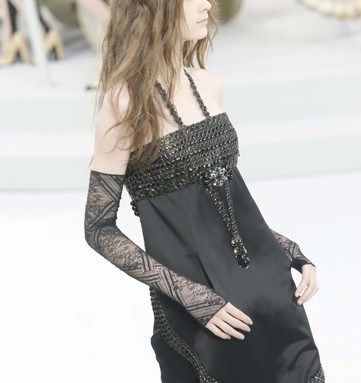 Much of the fall season’s richness was found in mesmerizing fabrics. Dries Van Noten revived an Orbis printing technique to achieve his limited edition marbleized floral prints, inspired by swatches he found in a couture textiles archive in Lyon, France. The painstaking method involves mounting layers of colored wax around a contraption called a Zylinder, which is then rolled onto wet cloth to produce a mix of blurry and sharp prints in vivid colors.

But guipure and lace in a variety of guises were the huge story for fall. Miuccia Prada led the pack, mixing unusual combinations of rich guipure with heavy lace. “They were looking for really rich, traditional fabrics, kind of like a widow’s veil,” said Hans Schreiber, creative director of the century-old Swiss embroiderer Forster Willi, which developed several styles of guipure for Prada’s collection made from cotton, Lurex and wool. The fabric, embroidered on old machines and finished with handmade cutouts, sells for around $800 a meter.

Contemporary twists, fusing old-fashioned chic with performance-led properties, was a predominant theme for lace, with styles ranging from destroyed silk “wrap lace” at Chloé to open lace bubbling with silicon pearls at Proenza Schouler. “The idea is that pearls are chic on the eye and silicon is sporty to the touch,” explained Pierre Alain Cornez, artistic director of Sophie Hallette and Riechers Marescot, which produced lace for the collections of Prada, Proenza Schouler, Zac Posen, Chloé and Chanel this season. For Posen, the firm developed a breathable, weather-resistant lace, using a special Japanese polyamide, to decorate down jackets. At Chanel, all of the gloves and leggings were made using an ultradelicate 14-point lace combined with Lycra. “It’s about balancing old-school traditions with high-performance techniques, chic with sporty and fantasy with classics,” said Cornez.

“The season’s main trend is for guipure,” noted Hervé Protais, general manager of Solstiss, the French lace manufacturer that developed lace styles for several collections, including Alexander McQueen, Dolce & Gabbana, Valentino, Roberto Cavalli and Christian Lacroix. “Some of the yardage that McQueen commissioned was initially for the spring season, but then he decided it wasn’t the moment,” Protais said, adding that the pattern for McQueen’s hand-drawn kissing peacock motif cost around 10,000 euros, or $15,000 at current exchange, as an exclusive for a year and a half. “That’s the most complicated part of the process—calculating where all of the 10,000 yarns are to go on the Levers machines,” he said.