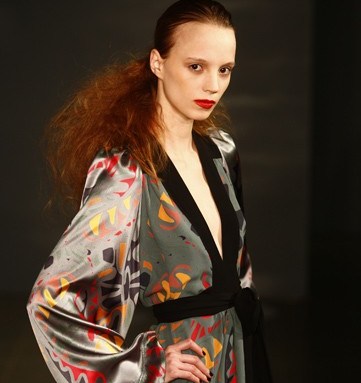 Revivals are a favorite sport in fashion, and they took on Olympic proportions
this season. Each fashion capital had its share of hotly anticipated comebacks and relaunches.

In New York, all eyes were on Marco Zanini and Peter Som. Zanini took over the creative helm at Halston, but even with original Halston-ette Liza Minnelli cheering him on, it wasn’t enough to secure a hit. The Versace alum received, at best, mixed reviews for his collection. Som fared slightly better trying to
revive Bill Blass. He managed to pump a more modern spin into a house that arguably has lost some fashion relevance in recent years. Som sampled Blass trademarks such as tweeds and big bows, and added trim suits, bright furs and sequined dresses.

Also returning to the runway was Hervé Léger, masterminded by Max Azria, who owns the brand. Azria re-created the label’s signature bandage using knits and a palette of pretty dégradés along with feathers and silk organza appliqués.
London saw the relaunch of the Ossie Clark label, designed by Avsh Alom Gur. However, the collection was hammered for being too literal at times, with floral and geometric prints.

In Milan, creative director Cristina Ortiz took on Salvatore Ferragamo. For her debut collection, glamour and Greta Garbo served as her guides, which some felt resulted in a little too much flash.

Meanwhile, in Paris, Esteban Cortazar tried to infuse a breath of fresh air at Emanuel Ungaro after a revolving door of designers left the house floating in limbo. Cortazar’s debut garnered tepid reviews, with criticism centered on his too-gentle approach to a house that needs to be shocked back to life. That said, the 23-year-old appeared to have more of an affinity for Ungaro’s heritage than his recent predecessors.

But if past runway seasons offer any lesson for the future of these designers, it’s that the clock is always ticking. After all, Lars Nilsson was dismissed from Gianfranco Ferré in early February before his runway debut for the house, and Chloé’s creative director, Paulo Melim Andersson, was replaced by Hannah MacGibbon in mid-March, after just three seasons.