The Nicole Miller Collection of luxe lingerie, produced under license by Delta Galil, will be unveiled at Manhattan strip club Scores West. 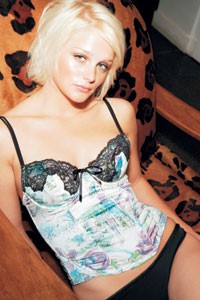 NEW YORK — Nicole Miller will be taking novelty lingerie to an uncharted zone Tuesday when the Nicole Miller Collection of luxe lingerie is unveiled at the Manhattan strip club Scores West.

Produced under license by Delta Galil USA Inc., the U.S. unit of Israel-based Delta Galil Industries, the first collection of bras, panties, corsets and allover seamless daywear tops and briefs bearing the Nicole Miller name will be modeled by 10 Scores strippers for 200 retailers and the media.

“The girls are very uninhibited, which is the main thing,’’ Nicole Miller said, explaining why exotic dancers, not fashion models, were selected to show the lingerie. “They won’t have to do their whole strip act, so they’ll be comfortable.”

Bud Konheim, chief executive officer of Nicole Miller, said, “We thought, why don’t we have a lingerie and high heels fashion show for a change. We had a weeklong casting call for strippers. There was a big discussion about strippers versus models and Nicole said we can’t use professional lingerie models because they wouldn’t know how to move in a stripper’s environment. But there won’t be a [dancing] pole, and of course, there won’t be any lap dancing or nudity.”

The music for the cocktail party and show, which is scheduled for 6-8 p.m., will be the same as the tunes played for regular Scores patrons, such as “Pour Some Sugar on Me” by Def Leppard, “Bootylicious” by Destiny’s Child and “Talk Dirty to Me” by Poison, Konheim said. Howard Stern is expected to attend and interview the dancers backstage.

The Nicole Miller Collection of lingerie will be available for shoppers at the Lord & Taylor flagship here on Wednesday, where Miller will make an appearance with the collection. Another event is planned in June at Bloomingdale’s.

Wholesale prices for bras are $15.75 to $22.50; panties, $7.20 to $14.85; camis, $15.30 to $17.10, and bustiers, $36 to $38.25. Fabrics include nylon mesh and Lycra spandex, Meryl nylon microfiber and Lycra, and blends of spandex with nylon or polyester. Special treatments include European eyelash lace, lettuce edging, lace insets and bow detailing, braided stretch bra straps, and bra cups lined in a leopard pattern.

Michael Fitzgerald, corporate senior vice president of business development at Delta Galil Industries, said a “much more luxurious” line of lingerie called Nicole Miller Signature is planned for spring 2006. The Signature line will be intended for major specialty stores and high-end boutiques. Wholesale prices will be around 20 percent higher than the Collection line, he said.

Wholesale sales projections for the combined Collection and Signature lines is $7 million to $10 million. Delta has a five-year plan of “well over $20 million,” said Fitzgerald.

Regarding Delta’s input on product, Zack H. Salino, vice president of marketing at Delta Galil USA, said, “What was key was that our designers spent a lot of time with Nicole before putting pen to paper. They were in the fabric room and worked with Nicole’s archive of prints. We set out to break the mold with newness that is playful and yet remains wearable. We view the [Collection] line as everyday luxury.”

Salino said Delta has extended the licensing agreement to include the U.K. and Europe, as well as the Israeli market, which includes 100 Delta stores.

While lingerie is a new category in Miller’s portfolio of fashion apparel, she has dabbled in sleepwear designs for 10 years, including products created in-house. Miller also expanded her sleepwear realm in 2000 with Exquisite Apparel Corp. to manufacture and distribute a $1 million business of novelty-printed pajamas for patients and scrubs for doctors and nurses at Hackensack University Medical Center, in Hackensack, N.J. A line of novelty gowns is being expanded at Lenox Hill Hospital here, as well as a line of scrubs at York Hospital in York, Pa., said Nan Puryear, executive vice president of Exquisite Apparel.