MOORE FROM L.A.: Democratic Presidential Debate Dressing: For Once, The Women Had the Advantage

What do you remember from the sea of suits during the debates that stretched over two nights? The unprecedented number of female candidates — and the fact that they looked refreshingly different.

Male politicians can skate through just about any sartorial situation by wearing the uniform of a suit and tie. And female politicians, because of their more individual ways of dressing and judgment based on sex appeal, are ripe to pick apart for everything from their barely there cleavage (Hillary Clinton) to their Naughty Monkey heels (Sarah Palin).

But in the vast field of 20 candidates fighting for a glimmer of recognition on stage and TV screens during the Democratic presidential primary debates on Wednesday and Thursday nights in Miami, for once it wasn’t the men who had the advantage — it was the women.

Almost as much as their policies and punchlines, what does one remember from the sea of similar suits during the debates that stretched over two nights? The unprecedented number of female candidates — and the fact that many of them looked refreshingly different. For once, women weren’t just one-offs or oddities, they stole the show.

On Wednesday, it was Massachusetts Sen. Elizabeth Warren’s ultraviolet jacket that made the biggest impression. In Pantone’s color of the year, it blazed a trail — at least for me — all the way back to the Ralph Lauren gray flannel jacket with contrast purple lapels that Clinton wore to give her concession speech in September 2016. 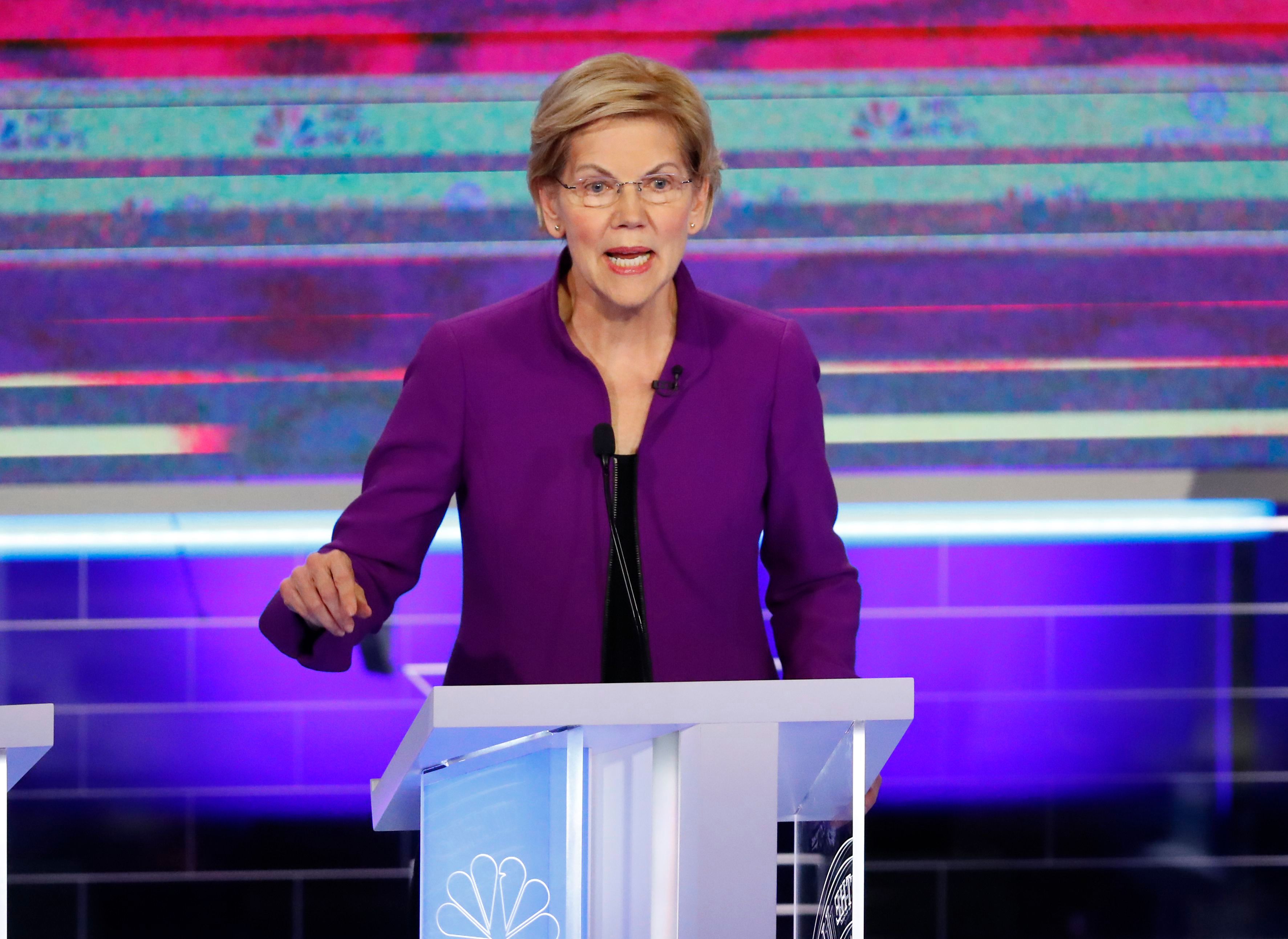 With the color purple a symbol of royalty, nobility and spirituality (also communicating originality, ingenuity and visionary thinking, according to Pantone), on one level the jacket signified Warren as the anointed one, the top-polling Democratic front runner on the stage that night. On another level, she knew it would make her stand out in a sea of dark-hued suits and ties, no matter how well-tailored (and not many of them were) or thoughtfully chosen (see Washington Gov. Jay Inslee, whose green necktie echoed his Green New Deal). 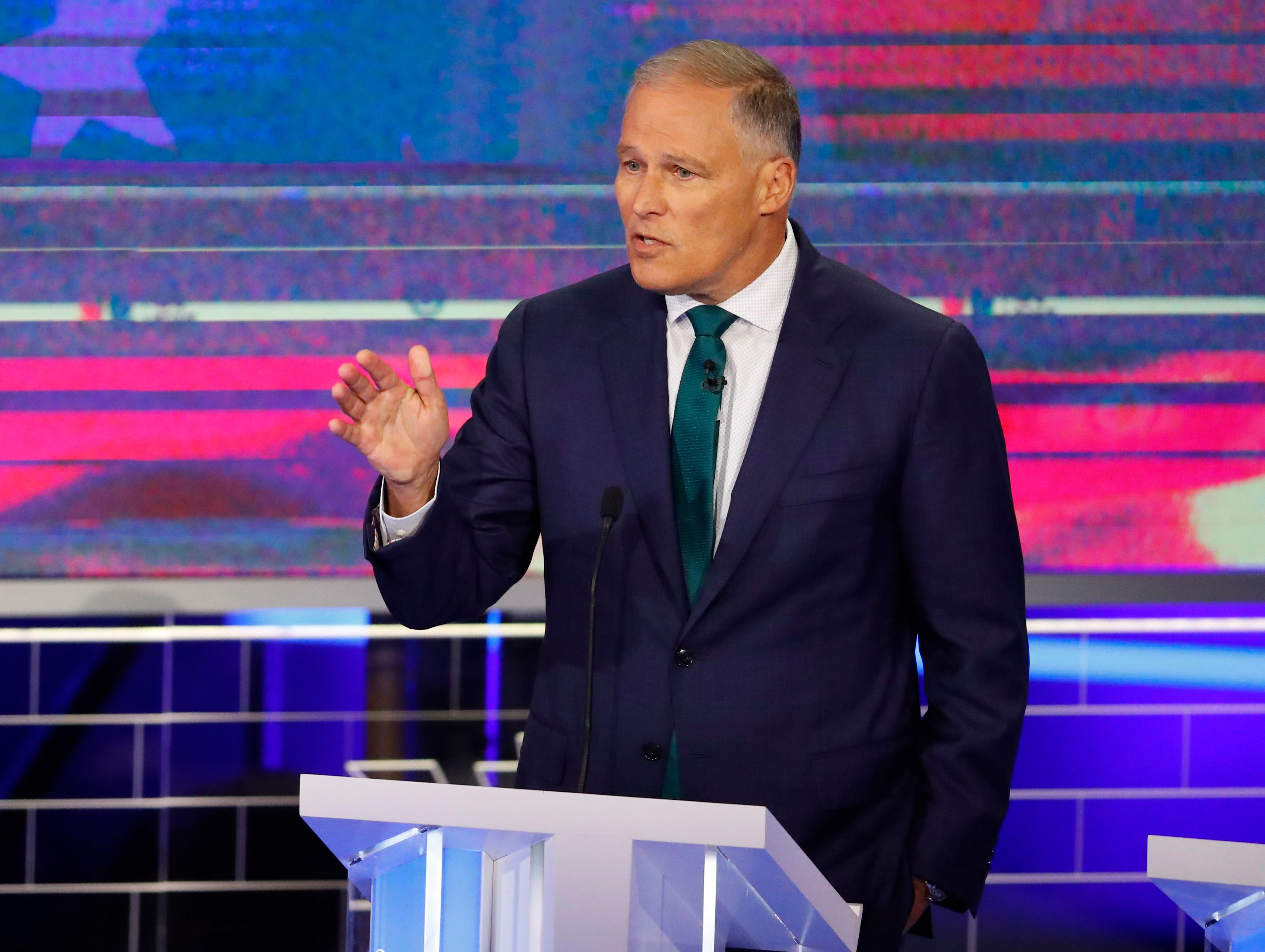 Although it was clearly a strategic choice, it wasn’t out of the norm for Warren. The jacket, designed by Nina McLemore, the former Liz Claiborne executive who outfits women in power — among them Clinton, Maria Shriver and Billie Jean King — was a slightly spiffier take on the senator’s Massachusetts-sensible, everyday wardrobe (she’s been wearing McLemore for years), with violet eyeglass frames and eye makeup to match. Nice touch.

The only other person on stage who came close was Rep. Tulsi Gabbard, an Army National Guard veteran who served in Iraq, who blazed her own trail in the Washington, D.C.-approved red female power blazer. That wasn’t what captivated viewers, though. The soldier-surfer from Hawaii may have been a long shot, polling at less than 1 percent, but the gray streak in her hair sparked a flurry of interest on social media, ranging from comparisons to Disney villain Cruella de Vil, to comments such as, “Is it bad if I take a photo of Tulsi Gabbard to my hairdresser this weekend?” 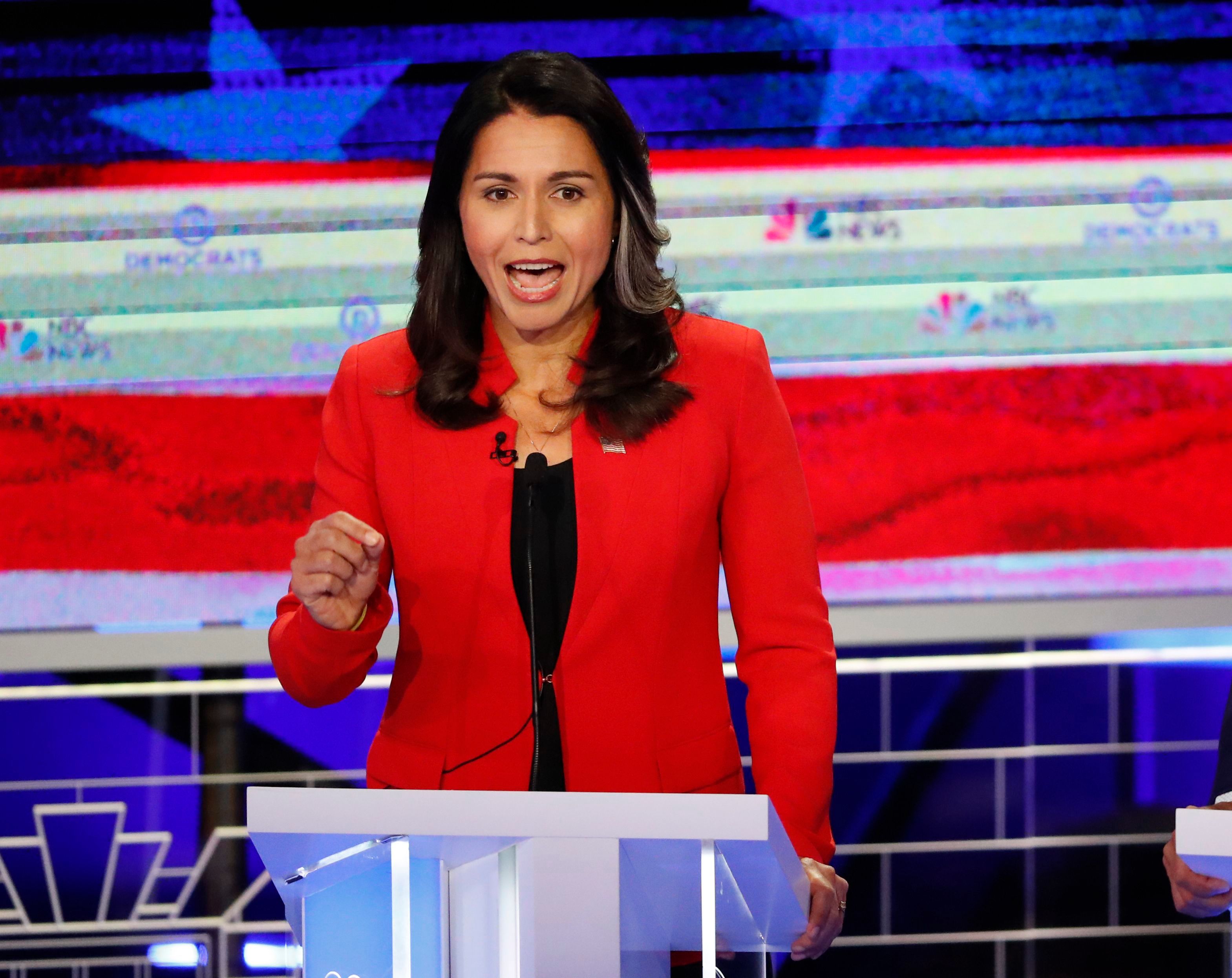 According to Gabbard’s sister, Vrindavan Gabbard, who runs her social media, the streak is natural. (Though truthfully, it looked more pronounced than in past weeks, lending gravitas to her relatively young 38 years.) “It happened after her deployment to Iraq. She keeps it as a daily reminder of her experience and her purpose,” her sister tweeted back in March.

Indeed, after Wednesday night’s debate, Gabbard was the top most-searched candidate in most states, despite the fact that she spoke just six minutes and 38 seconds to New Jersey Sen. Cory Booker’s dominating 11 minutes, according to Google search. The spike in search interest could have been due to her tense exchange with Ohio Rep. Tim Ryan about the U.S. presence in Afghanistan, her sister’s blasting of NBC on social media for favoring Warren, her hair or a combination of all three. Still, it was a win in the bid for relevancy. 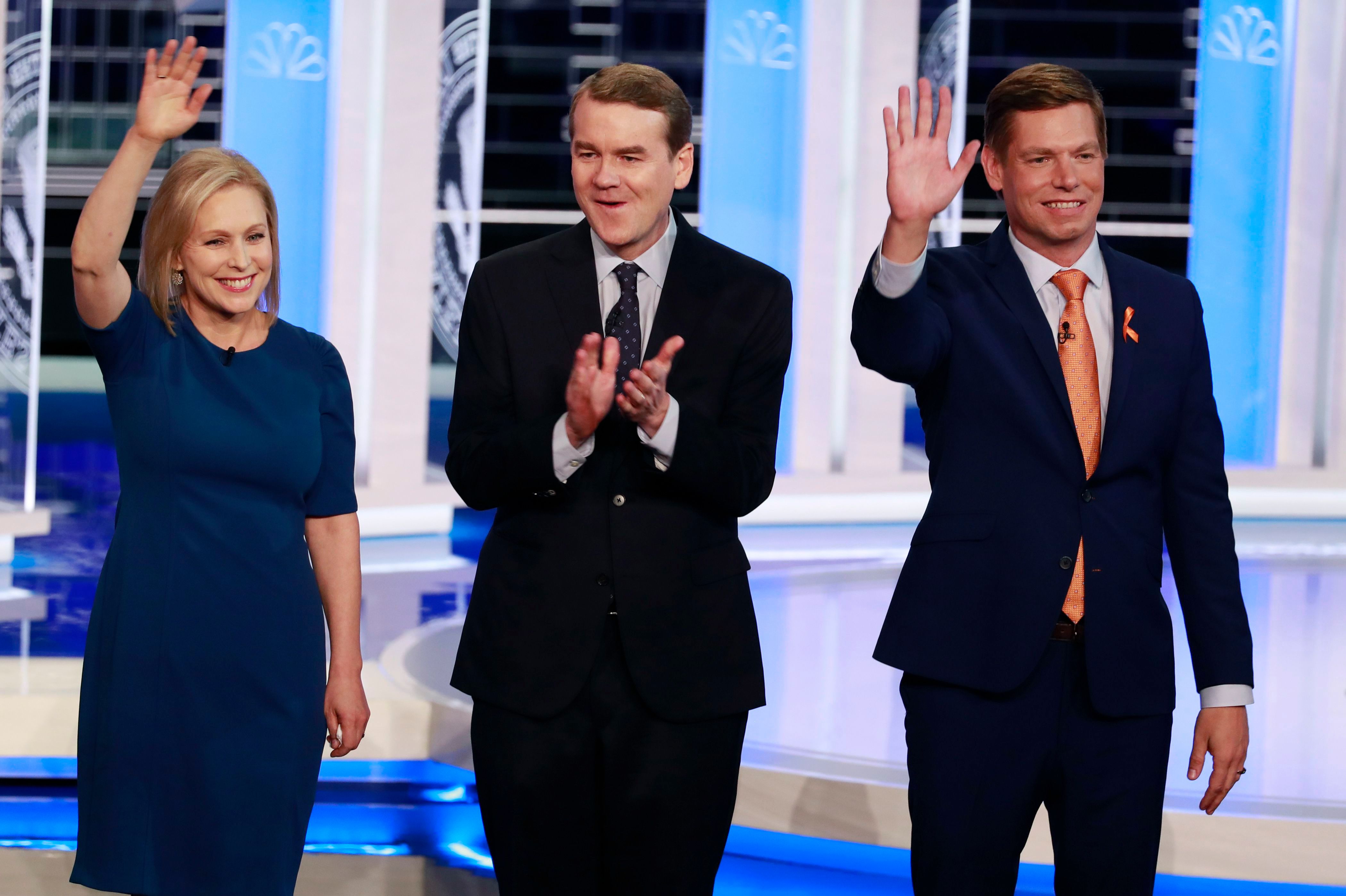 On Thursday, Andrew Yang tried to stand out from top players former vice president Joe Biden, Vermont Sen. Bernie Sanders and South Bend, Ind., mayor Pete Buttigieg by playing the Silicon Valley outsider sans tie, but ended up looking more like the kid who forgot his homework. And California Rep. Eric Swalwell, who has made gun violence the cornerstone of his campaign, pulled at the heartstrings by matching his orange necktie to an orange ribbon in honor of victims of the Stoneman Douglas High School shooting. 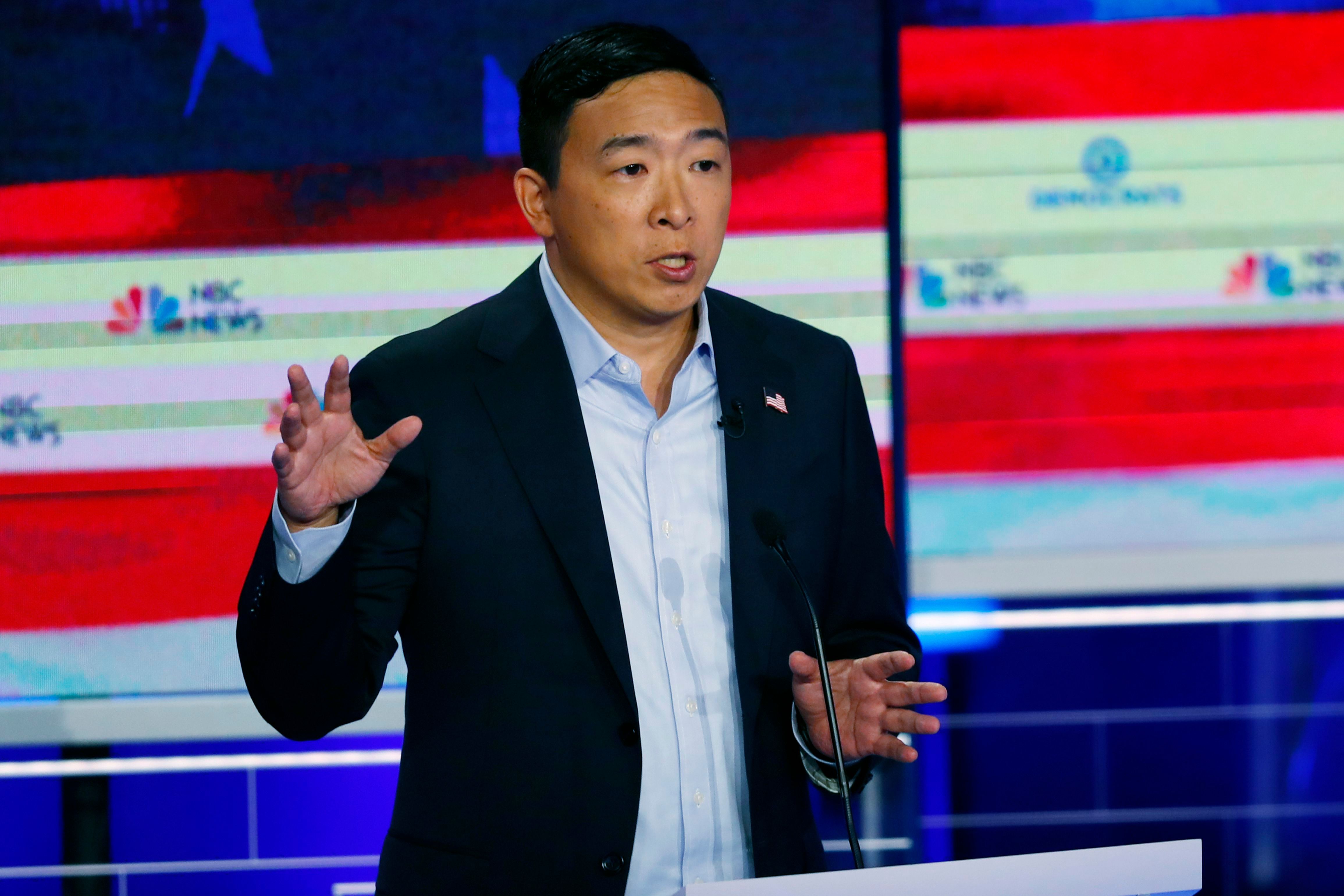 But Marianne Williamson, outlier, author and friend-of-Oprah, took the top Google search honors among candidates during the debate. Maybe because it was because she resembled the mother-of-the-bride in a Hollywood rom-com, wearing a powder blue pants suit and paisley blouse that whispered Armani, or maybe it was because her parting comment to the audience was that she will “harness love” to beat Donald Trump. Either way, she sparked curiosity. Then there was the teal shift-wearing New York Sen. Kirsten Gillibrand trying to prove, like Minnesota Sen. Amy Klobuchar the night before, that you can be a feminist and wear a dress. Except if that dress has nothing distinctive about it, why bother? 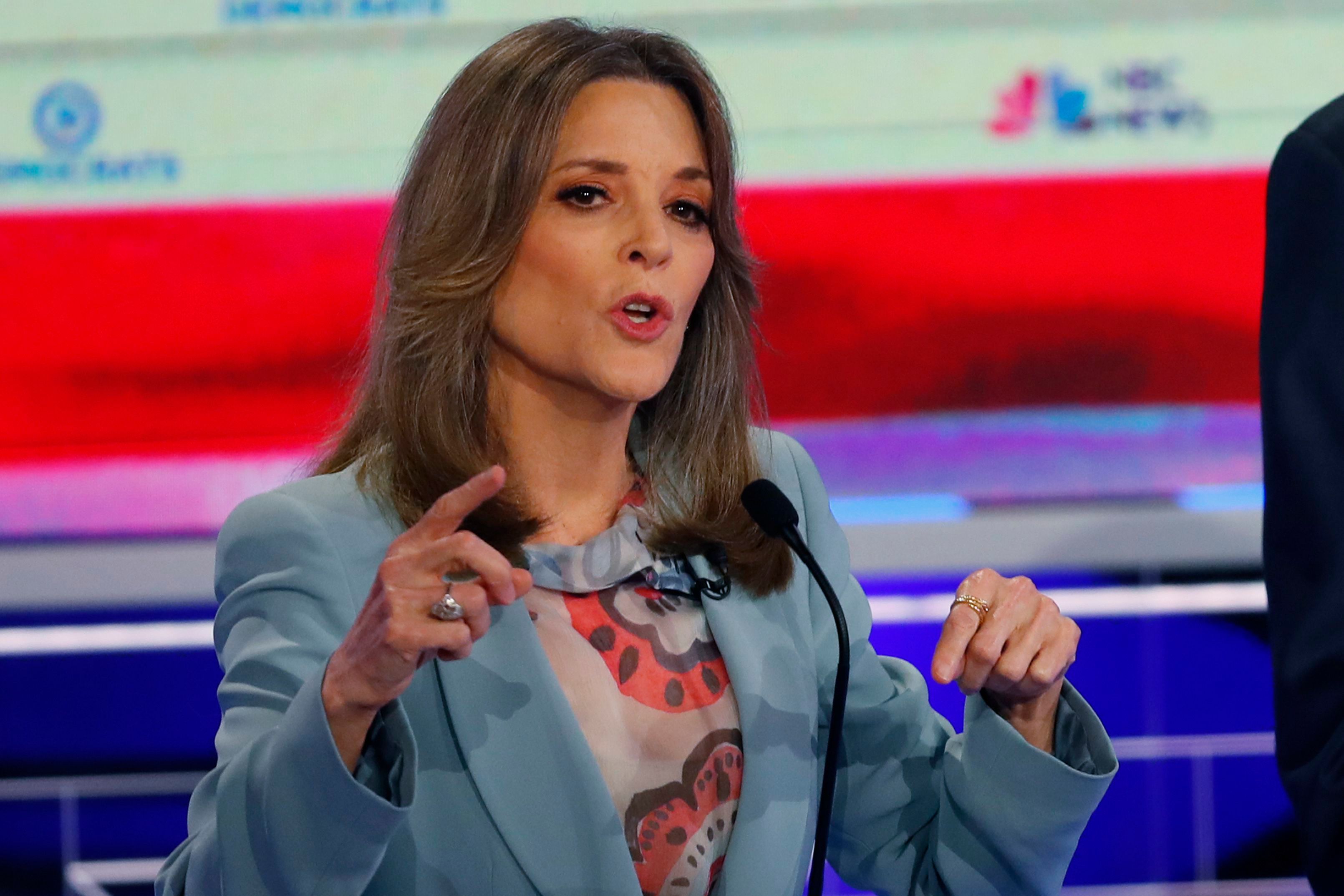 California Sen. Kamala Harris is the one who killed it — shutting down a stage-wide brawl with an early zinger (“America does not want to witness a food fight, they want to know how we’re going to put food on their table”), then taking on frontrunner Biden with a rebuke of his race record. The seasoned prosecutor beat the men in suits by wearing one of her own, and reignited Clinton’s Pantsuit Nation anew while she was at it.

An informal poll of stylists suggested Harris’ navy blue suit may have been Stella McCartney, but it didn’t look that luxe to me. Still, it stood out with blink-and-you-barely-see-them details: a double lapel here and sleeve pleat there. Adding interest was her usual update on traditional pearls, a double strand necklace of silver chains and pearls that generated praise on Twitter. The effect was just enough to attract attention, but not so much to distract from her message. 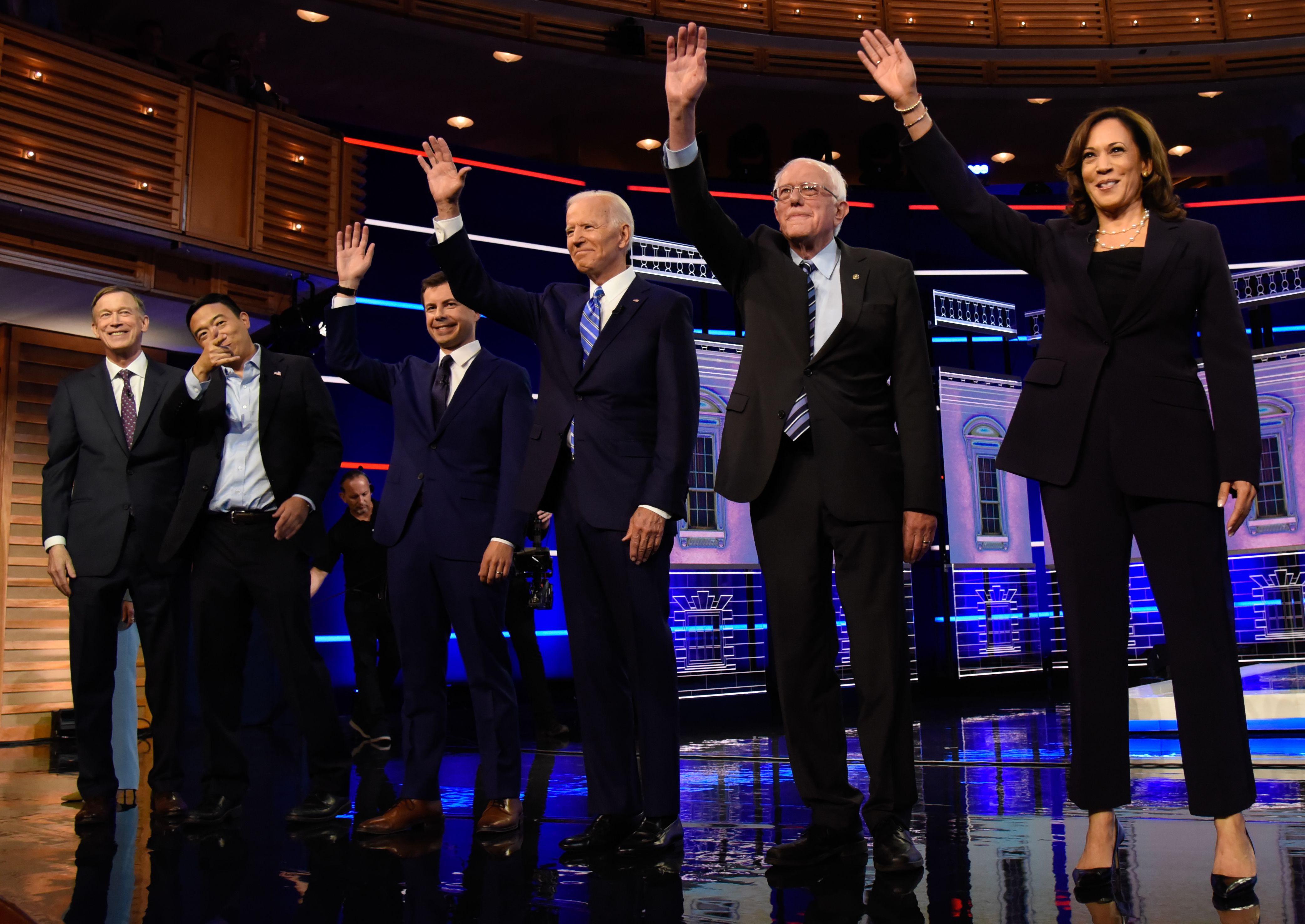