Denim Dictates the Agenda at MAGIC

Buyers were practically waxing poetic at MAGIC International amid the abundance of embroidered, handcrafted and gypsy looks. 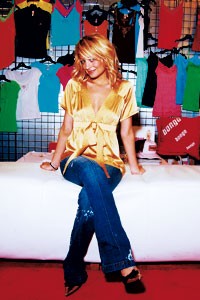 LAS VEGAS — A bohemian rhapsody greeted buyers at MAGIC International and WWDMAGIC last week, and they waxed poetic about the embroidered, handcrafted, and gypsy looks, all geared to complement the denim-dominated wardrobe.

“Everything old is new again, and that whole bohemian influence is so strong,” said Jaye Hersh, owner of Intuition, the trend-making West Los Angeles store. “But it’s come down to a place where it’s more understandable for the mainstream and will have a longer life.”

The look is an easy way to individualize denim, buyers said.

“Handcrafted looks are really popular now and an easy way to make a fashion statement,” said Christian Toth, president of Off the Wall, a 10-store juniors chain based in Vancouver, Canada, who planned to spend about 10 percent more on fall buying compared with last year. “Business is good, and early spring is doing really well.”

Many retailers were upbeat, writing orders and filling immediate needs as well as getting a read on fall must-haves, which included fur-trimmed sweaters and coats, mixed media skirts and bejeweled tops. The show marked the second run in its new format under one roof at the Las Vegas Convention Center as WWDMAGIC — the women’s portion of the event — moved from the Sands Expo.

Celebs such as Macy Gray and Nicole Richie made the scene to push their lines.

For Gottschalks Inc., the Fresno, Calif.-based chain of 66 department stores that reported a January same-store sales rise of 0.9 percent, with strength in women’s moderate and better sportswear, denim topped the shopping list.

“It’s all about the distressed denim now,” Gottschalks buyer Pam Poe said. “And to go with that it’s about the separate jacket and distressed pieces to go over the sexy cami.”

Distressed denim came in the form of ripped, rubbed, splattered or bleached jeans and jackets. The more unusual and the pricier, the better. Even Guess plans to focus on premium jeans in its retail stores beginning in fall.

To stand out from the show floor’s sea of denim, Seven7 jeans, a licensed contemporary line by Tarrant Apparel Group, touted its new partnership with Stacie J., a cast-off from the second season of NBC’s “The Apprentice.’’ The professional model and Subway fast-food franchise owner will appear in ads for the line.

“We wanted to take the line to the next step and promote the fact that denim is a big part of the workplace,” said Gerard Guez, chairman of Tarrant.

Baked, crinkled touches were key looks at IT Jeans and Silver jeans, booths that were packed with buyers. But Michael Silver, owner of the veteran Silver line, wasn’t happy about the denim deluge.

“When denim is hot, it doesn’t help the real denim players,” Silver said. “There are so many choices that it takes up buyers’ brain space to decide.”

“It’s all about being a hot brand, and I don’t want to be the Von Dutch hat of the industry,” said Montesano, who wants his brand to have more substance than flash. His booth offered flowing caftans, allover daisy crocheted sweaters and embroidered corduroy coats.

After the Von Dutch trucker hat craze two years ago, the company has retooled, with denim in clean washes along with cashmere denim, vintage-style T-shirts sans logos and a leather outerwear collection (licensed to Space 2000) in moto-styled cuts with hardware and bright colors. At MAGIC, Fred Segal picked up the line as well as European buyers buoyed by the strong euro.

At Scrapbook Originals, the Los Angeles-based juniors line, the handmade vibe was the focus — with the launch of sportswear in knit dresses, tube tops and rollover skirts to complement the T-shirts. Wholesale prices range from $12 to $30, and the line sells to stores such as Nordstrom and Urban Outfitters. With the juniors retail space in tough straits with the woes of Wet Seal and the recent announcement of Forever 21 buying Gadzooks Inc., many juniors firms, including Scrapbook Originals, plan to stay upmarket.

“We want to stay in the higher tier of the juniors market where fashion and not price is the focus,” said Kelly Kaneda, president of Scrapbook Originals.

Even with the slew of celebrity competitors such as Jessica Simpson and Macy Gray, the Chick by Nicky Hilton juniors line was bustling, said Allen Fredman, president of Benvin Industries Inc., which licenses the brand. Lined cotton voile skirts with tie-dye patterns, denim blazers fringed everywhere and embroidered silk crepe blouses were key sellers, he said.

“We’ve booked this market from majors to specialty retailers, and they’re buying,” he said, noting the company opened with 276 specialty stores for spring, and the total will almost double, to 550 by this summer.

More than celebrity lines, buyers from counterculture teen chain Hot Topic were on the hunt for strong vendor partnerships.

“Our whole thing is keeping things exclusive, like licenses for apparel,” buyer Derrick Baca said. “We’re searching for really great accessories, and we just like to look at the trends here and see how we can interpret them in a way that fits our customer.”

At Coastal Concepts, licensing was in demand for the juniors firm, with plans to launch its D.A.R.E. T-shirts exclusively at Hot Topic in March for mall stores, then open it up by May. Its latest addition to the portfolio was the Bubblelicious-licensed T-shirts in layered looks with ribbon details.

On the misses’ front, business is on the rise at Woolrich, where the women’s business surpassed men’s last year, accounting for 60 percent of sales. This is because of a strong color story, said Lederle Eberhardt, Woolrich’s vice president of design and merchandising. In line with the major coat trend hitting this spring and continuing in fall, the company relaunched its outerwear category, featuring wool jackets with chevron prints, faux suede zip-up jackets and down vests.

Most vendors said they weren’t yet seeing the benefits of the elimination of textile and apparel quotas, particularly in product manufactured in China.

“Factories are getting bigger and bigger in China, so they’re wanting bigger minimums,” Eberhardt said. “We’re seeing that prices are holding.”

Others echoed that sentiment.

“China wants to trade up in its quality, so we’re not seeing any changes yet. For now it’s wait and see,” said Albert Shebar, ceo of juniors lines Dollhouse and Jou Jou.

In The Wild and On the Vine

– Images of apples, cherries and strawberries found on everything.

– Brown is the new black.