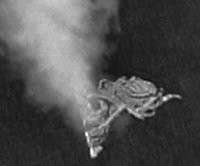 With a new staff and a fresh focus, Fractal jeans has relaunched its brand for spring retailing.

The Westlake, Ohio-based company, which uses lasers to burn patterns and effects into denim, launched in 2001 with a design focus as distinctive as its technology: The company’s jeans were decorated in fractals, or patterns of swirling lines that create the same shape when viewed from close up or far away.

The lasers worked fine — in a couple of minutes the company could cover a plain pair of denim jeans in an elaborate mass of swirling lines, an effect that could have been duplicated only with elaborate embroidery or by handpainting.

The only problem was the patterns didn’t catch on with consumers.

“It was very apparent to us that the technology was excellent and the execution was weak,” said Caton Burwell, director of Fractal’s New York office, who joined the firm in December 2001.

While the patterns are gone, the name has stayed. Burwell said, “We’ve kept the name because it’s true to our heritage.”

Last May, the company hired a new designer, Michelle Siwy, and set out to design a more marketable collection. Its current offering includes a tamer assortment of laser-treated, or lased, jeans ranging from whiskered and frayed looks to pinstriped styles and jeans that appear to have been washed and sanded down so that faded areas form the shape of a horse’s head, complete with detailed facial features and flowing mane.

Siwy acknowledged that learning to design for the lasers —as opposed to the sanding and blasting techniques commonly used in jeans production — has required a lot of trial and error.

“You have to make a lot of samples,” she said. After coming up with a pattern to lase into the jeans, the company typically runs the design onto several pairs at different intensities, both to judge how the initial effect will look and how the pattern will stand up to the industrial washing process.

“Just by varying the intensity, our technicians can adjust the effect from a light wash to fraying to destroyed,” said Burwell.

The company was founded by Darryl Costin, who holds a doctorate in material science and developed the laser process for fabric. Fractal LLC is majority owned by his holding company, TechnoLines LLC.

It currently lases jeans at facilities in Winder, Ga., and Taylorsville, N.C. Its sewing and washing facility is in Philadelphia, Miss.

The firm is also exploring the idea of setting up laser stations at retail stores, which would allow consumers to request custom-lased patterns, such as the wearer’s name or a favorite image.

But the cost of that would be high — as much as $100,000 to install the 50-watt laser necessary to run such a system. (By comparison, the typical laser in a handheld pointing model is a 5-milliwatt laser, with 1/10,000 the power of the 50-watt model. At its main laser centers, Fractal uses 2,500-watt lasers.)

The company has signed on Hatch showroom to handle sales, and so far has sold $500,000 worth of spring merchandise. For fall, the company hopes to double that volume, said Burwell. Wholesale prices run from $50 for a pair of jeans without laser treatment, which the company calls “naked” jeans, to $65 for a fully lased pair.

The fall collection includes six silhouettes of jeans in three lase patterns. It currently has the capacity to lase about 1 million pairs of jeans per year — it takes from 30 seconds to two minutes per lase — but is not yet running at full laser capacity.

Burwell said eventually there may be more business potential in licensing the technology than in selling Fractal’s brand of jeans.

“That’s a debate we have internally,” he said, explaining that the process also works on other fabrics. The company has tested it on everything from cotton corduroy to polyester fleece. — Scott Malone

Decorated denim can be a powerful force.

A runway show and auction of more than 100 embellished Levi’s jackets netted about $300,000 on March 8 to support AIDS service organizations in North Texas, all thanks to the 14th annual benefit staged in Dallas by the Design Industries Foundation Fighting AIDS.

Jeweled, feathered, recut, resewn and appliquéd, the Dallas Collection jackets were paraded before a crowd of 1,300 at the International Apparel Mart in a spirited runway show themed “Nuestra Familia” — “Our Family.” The production featured parodies of such TV shows as “The Addams Family” and “The Osbornes” as well as human embodiments of the zodiac signs and lots of high-energy dancing. “I wanted it to be a celebration of life,” said Rhonda Sargent Chambers, who chaired the event and directed the show.

The bulk of the 120 jackets — including 15 for children — were decorated by an array of talent, from fashion and interior designers to florists. Among the big fashion names who reworked denim were Cartier, Gianfranco Ferré, Giuliana Teso, Kenneth Cole, Luca Luca and Narciso Rodriguez. Lead sponsors were Absolut Vodka, Levi Strauss and MAC AIDS Fund.

The two top-grossing jackets were both created by Dallas designers who crafted made-to-measure clothing for a high-profile clientele. John Russell’s jewel-encrusted number was bundled with tickets to Elton John’s Life Ball following the Academy Awards and sold for $13,500. Michael Faircloth retained denim only for the collar, cuffs and waistband in a jacket of beaded and embroidered organza that fetched $10,000 and included a trip to San Miguel in Mexico. — Holly Haber

The Forwear jeans line, which bowed last October, has changed its named to A.Z.I. Jeans and adapted its look. The goal is to to separate the jeans offering from the main Forwear better contemporary sportswear collection.

The brand has grown from five to 17 styles and added new motifs and silhouettes, including jackets and skirts. In addition to its signature semiprecious stones, the fall line includes lace and other embellishments. Along with blue, new fall colors include antique browns, green and grays, with more earth-tone beads and stones, such as amber and cat’s eye. New patterns feature stones and beads in geometric shapes, some with feathers. A few basic tops and bottoms also have been added to pair with embellished looks.

The jeans line sold more than 2,000 units wholesale from October to January, said Steve Palay, vice president of sales. First-year sales are projected at $3 million for the jeans line. Wholesale prices range from $79 to $89 for jeans, with skirts going for $60 to $70 and jackets from $99 to $110.

“After the initial response, we wanted the line to have its own identity” from the main Forwear line, said Palay, who added that embellishment is still going strong. “We’re following the jewelry market, and we’re generating ‘happy clothes.’ With uncertainty and the [threat of] war, people are buying impulse items.” — Georgia Lee

Levi Strauss & Co. said Wednesday that it has expanded senior vice president Greg Hammann’s duties to include oversight of the company’s Canadian and Latin American operation. He continues to serve as chief customer officer for the U.S.

According to a Levi’s memo explaining the move, the change “reflects the way many of our retail customers are increasingly managing the Americas as a single region versus separate sales territories.”