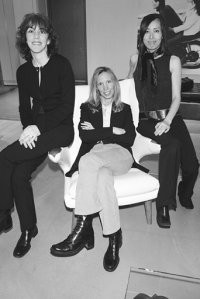 Taking a cue from the activewear-inspired collections on the runways, Lee Cooper is launching its own version of sportif chic. The company, owned by U.K. distribution group Matalan, this spring is launching jeans designed for jogging. The Jog-in-Jeans, are fashioned after sweatpants and will carry a suggested retail price of about $75. (Price converted from the euro at current exchange rates.) The 10-model collection for men and women, will be sold in France at department stores Galeries Lafayette and Le Bon Marché, starting in March. They will also be available in Belgium, Switzerland and the U.K. There are no plans for a U.S. launch. Made of ultrasoft denim, the jeans come with racing stripes up the legs and elastic waistbands. The collection also includes zip-up jogging-style denim jackets and colorful printed cotton tops.

Looking to bring a growing Brazilian trend to the U.S., a major Mexican manufacturer of denim is getting ready to open a mill in Miami to make knitted denim.

While traditional denim is a woven fabric, in recent seasons some designers have started to work with a knitted fabric made of indigo-dyed cotton yarn and finished to resemble denim. Sewn into jeans, it provides a look similar to the denim twill, but because of its lighter weight and stretch qualities — the fabric is typically made with spandex — it can provide a tighter look than the woven fabric. Some contend that the knit fabric, when worn tight, is more comfortable than traditional denim.

At a time when the U.S. textile industry is contracting, Tali Atala, vice president of the company, Mexican Denim, said that current trade laws made it logical for his company to open a manufacturing facility in Florida.

“From a business point of view, it makes sense to market and sell to Mexico and Canada under NAFTA or under CBI,” he explained, referring to the Caribbean Basin Initiative trade preference program.

The current CBI trade benefits allow garments made in the region of U.S. fabrics to enter the U.S. free of duties and quotas, although Mexican fabrics do not qualify. While negotiations continue for a proposed Free Trade Area of the Americas, which would drop such barriers among all Western Hemisphere countries, except Cuba, the U.S. is pursuing other bilateral trade agreements with its neighbors, which, like the CBI deal, could encourage the use of U.S. fabrics.

Atala said his company bought a 45,000-square-foot building in Opaloka, outside Miami, that had formerly housed a textile mill. Since September, the company has invested over $3.5 million to install new dyeing, winding and knitting machinery. Atala said he expects the mill to bring full production in the next two weeks.

At full efficiency, which sales manager David Greenberg said he expects to reach by June or July, the mill is expected to produce 150,000 pounds of primarily cotton-spandex knit denim per month. The company has already hired most of its planned initial workforce of 45. If there is sufficient demand, the facility leaves room to add capacity and eventually build the workforce to 300, said Atala.

Given the tough times the U.S. textile industry has faced for the past few years, Atala said there should be no problem attracting experienced staff.

“There are a lot of very qualified people who lost their jobs” in the Miami area recently, he said.

With an eye toward attracting younger shoppers, Nautica Jeans Co. has redesigned its women’s product line and plans a relaunch of the brand for fall retailing. The company has tightened up its fits and, in an acknowledgement of cooling consumer ardor for denim, increased its offering of alternate fabrics.

“As the business climate and the whole economy gets a little tougher, we want to give people something new to keep them coming into the stores,” said Paulette McCready, president of the New York-based brand.

She said in the three years the women’s product have been available in stores, its styles have drifted into more relaxed looks that appeal to an older customer than Nautica wants as its target.

“When we launched in fall 2000, we started out with a look that appealed to a younger customer. As we evolved, there was a bit of a change and we became a bit more misses’ influenced,” she said. “It lost the customer by being a more generous fit. We need to be able to appeal to the customer who shops the status denim departments.”

The line includes two core denim styles. They are boot-cut jeans with rises of 8 5/8 inches and 7 7/8 inches, one to two inches higher than is typical in many contemporary styles. For fall fashion deliveries, a key denim element is “three-dimensional denim,” said Miyuki Takahashi, senior vice president and creative director. Those jeans, made domestically, have baked-in wrinkles that will remain through the washing process.

“There’s a little bit of a slowdown in the trend for denim and we think that alternative fabrics are becoming more important,” said McCready. “But I still think denim will be important, people will still wear it.”

In the fiscal year ended March 2, 2002, Nautica Enterprises Inc.’s wholesale revenue, which includes Nautica branded women’s and men’s product, as well as Earl Jean and other sub-brands, came to $516.5 million. Net sales, which also include licensing retail and the results of its company-owned stores, were $692.1 million. The firm has not reported its results for the recently ended fiscal year. For the first nine months, net sales were down 3.4 percent.

McCready also said the company has doubled its ad budget this year to support the relaunch. She declined to reveal how much Nautica will spend to promote the women’s jeans line, but said it would be mounting a print campaign and that the women’s and men’s jeans lines together will run broadcast ads.

Given the current tough economic times, she said, her goal is to increase the fashion component of the line and to motivate consumers not to wait for sales to make purchases.

“You want to give people a reason to want to buy something at full price, so that everything doesn’t have to be marked down,” she said. “It’s not that business has been bad, it’s that with the economy being what it is, it’s so difficult to build a line and make it successful and make it grow.”

After three years in the men’s wear business, Don Kerkes, director of Indigo Palms, said that it was time to enter the women’s denim market.

“The demand for our men’s line has really heated up in the past 12 months,” Kerkes said, “and our retailers have been asking for a line for women.”

Opening to buyers in June, he said the new line will be denim focused, with a five-pocket basic jeans style as the focal point. Denim jackets and skirts will also be part of the collection, as well as nondenim pieces. Kerkes said he will target better specialty stores with the women’s line and while it’s not yet finalized, wholesale prices should range from around $20 to $60.