Denim of Virtue is betting on clean, classic jeans, while the rest of the premium market focuses on skinnier legs and elaborate stitching. 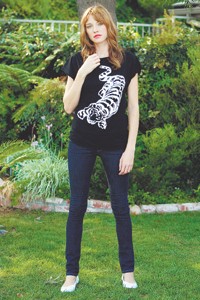 A Solo Flight for Jet
John Eshaya, the buyer for Los Angeles retailer Ron Herman, wants to set the next denim trend by producing it himself.

Jet Jeans will launch this fall as part of Eshaya’s 19-year-old tops company, John Eshaya T’s. The new line will feature a single silhouette, a five-pocket skinny-fit that tapers to an 11.5-inch leg opening.

“That’s the one shape I did, and that’s the most important, I think, for the fall season,” said Eshaya, who envisions women wearing the tight legging with a long top and a cropped jacket.

The silhouette has appealed to Neiman Marcus and Fred Segal Fun, which are among the 50 or so retailers that have ordered styles from Jet Jeans’ first collection. Though Jet’s tops are sold in 500 accounts worldwide, the company wants to limit distribution of Jet Jeans to keep the emerging brand exclusive, said Cat White, sales manager for Base Showroom, which handles Jet’s sales out of New York.

Jackie Brander, owner of Fred Segal Fun in Santa Monica, Calif., said she plans to display the indigo and black sateen leggings she ordered from Jet Jeans with Eshaya’s tops, away from the thick of the 40 denim brands stocked in her shop.

“I’m going to display this as fashion,” Brander said, via e-mail.

Such interest from influential retailers should help boost sales for Jet, which offers 20 different tops each month, including knit sweaters decorated with skulls, burnout Ts and cropped A-line jackets with rounded collars and a single snap button on the top. Eshaya forecast that wholesale sales for the jeans, which are priced $60 to $69, would reach $2 million to $3 million this year, or one-third of the company’s total volume.

With Jet Jeans, Eshaya joins a growing circle of retailers entering the denim market with their own brands. In May, Fraser Ross, owner of celebrity-driven Kitson in Los Angeles, unveiled Kitson Denim, a jeans-driven young contemporary line designed and manufactured by footwear company Skechers USA.

Handling production for Eshaya is Bettina Javaheri, who runs her own contracting business in Los Angeles.

As for Eshaya’s decision to offer only one silhouette in black sateen, four subdued shades of corduroy and gray, indigo and sandwashed denim, he reasoned that most denim companies are known for one top seller.

“They have thousands of styles, but it’s only the one [model] … that is a great jean,” Eshaya said. “I thought, ‘Bypass all that and do the jean legging.'”

Eshaya said for next spring he will introduce another new silhouette.

“The color might change, or it might get wider,” Eshaya said. “I just want the perfect, the one jean that you’re going to wear that season.”
— Khanh T.L. Tran

Tadd Zarubica, whose denim credentials include stints as president of Hudson Jeans and Yanuk Denim, has introduced jeans wholesaling from $72 to $88 for fall. The Los Angeles-based line takes its fashion cues from classic Lee jeans, shunning extra hardware and intricate embroidery in favor of dark washes and back-pocket flaps with minimalist designs, Zarubica said.

The line has been snatched up by some of Los Angeles’ top retailers, including Kitson, American Rag Cie and Planet Blue.

Although Zarubica said the target customers range from teenagers to women in their 50s who shop at trendy boutiques, the designs have a sophisticated appeal. The rise on his straight-leg jeans is 9 inches, compared with the standard 7.5 inches. Even the skinny-leg design is more comfortable and flattering, with a wider leg opening at the bottom, measuring 12 inches compared with some lines that make them as narrow as 9 inches.

“It’s about having a phenomenal fit and also getting back to the things we love about denim — the washes, the textures, the stitching,” said Zarubica, who is the designer and co-owner of Denim of Virtue.

Zarubica started the company last year. After running a design and merchandising company in the Nineties, Zarubica said he was anxious to “get back in charge” and be involved in sales and administration. The other investors are silent partners.

James Hammonds, denim buyer for American Rag, ordered Denim of Virtue for the company’s new 5,500-square-foot store, christened New World Denim Bar, which is set to open in August next to the Los Angeles flagship on La Brea Avenue.

“We’ve had higher-waisted jeans over the past season, and they’ve done really well,” Hammonds said, adding that most of American Rag’s customers are in their 20s and 30s.

Limiting distribution to 150 doors worldwide in the first year, Zarubica forecast that total revenue will surpass $5 million. He also offers shorts, capris and miniskirts that wholesale for $55 to $65.

“I think that what’s nice about them is they have a very nice fit,” said Planet Blue buyer Jen Rossi.

She first saw a Denim of Virtue prototype in March on the designer’s niece, who offered to take them off so Rossi could try them. Rossi accepted the offer and loved them. So when Zarubica contacted her three months later with the finished line, she was happy to jump on board. Now her customers are buying multiple pairs.

Still, as Denim of Virtue opts for a higher rise in the straight-leg cut, a debate has followed about whether there’s a customer for them in a market that’s fixated on low-riding skinny jeans.

“I think it’s a big risk,” said Eric Kim, owner of Los Angeles’ Monarchy Jeans. “I don’t think there’s a market for a higher-rise jean. I do think it’s getting cleaner in washes. But it’s not going wider leg or back to the basics out there. European distributors only touch skinny-leg jeans.”

Kim added that he would be concerned about the fabric and stitching quality at Zarubica’s lower price points.

In response, Zarubica conceded that he doesn’t expect high-rise jeans to overtake the market, but he said they’re important because many customers are getting older and are more comfortable with wearing jeans.
— Emily Bryson York

Krajecki gained the confidence to go ahead with a full denim collection after the success of his initial effort last year, when he bucked the low-rise trend by offering a pair of high-waisted jeans with braided insets as part of his ready-to-wear collection. Response to the design leads him to believe there’s plenty of room in the saturated premium denim market.

“It’s like any other artist or designer doing something,” Krajecki said. “Everyone’s got their own style, flavor and fit. People who are really on top of it are always looking for different styles.”

Krajecki, the only designer working on the denim line at his eight-year-old company, said there are still some key details to be ironed out for the inaugural collection. For instance, he hasn’t decided whether he wants to name the denim line, which will be separate from his rtw label, and he struggled with setting the $120 to $150 wholesale price range. The braided jeans from last fall, for instance, retailed for about $340. The initial line will include as many as six styles and be followed by a fuller collection for next spring.

“It’s hard for us [with pricing] because of the small quantities we produce [in Los Angeles],” Krajecki said. “A lot of [retailers] are trying to get us to go lower, but unless it’s 1,000-piece units, we have to keep the prices high.”

Retailers, including Bergdorf Goodman and Bloomingdale’s in New York, and Sirens and Sailors, based in Los Angeles, have placed orders that are expected to ship this month. Krajecki said he hopes more department stores will place orders and that the denim will be picked up overseas.

“We have customers that come in here specifically for Grey Ant, so of course we’re going to stock the new jeans,” said Jennifer Phillips, owner of Sirens and Sailors, adding that she sold all 20 pairs of Grey Ant’s jeans she stocked last year.

Since Grey Ant’s launch in 1998, Krajecki has built a cult following for fashion that defies trends, and celebrities like Gwen Stefani and Nicole Richie are fans.

Among his denim offerings are shorts in different lengths and jeans with 7- to 12-inch rises and 12-inch leg openings. A straight-leg style with zippers that start from the front and extend to the back will be one alternative to the high-waisted look. Krajecki won’t jump on the skinny jeans bandwagon, however.

“It’s really tough to wear high-waisted denim that’s tight all the way to the ankle,” he said.

Krajecki kept the palette simple, going with dark and distressed black, midnight blue, khaki gray and a lighter blue that he describes as a “really corny, Seventies Wrangler blue that I hated so much six years ago, but now makes sense.”
— Katherine Nguyen