The Limited Jeans Collection is set to hit all 323 Limited stores in July ... Victoria Beckham rocks Los Angeles with her new denim line. 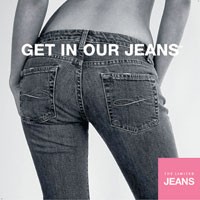 Ross said he racked up $35,000 in sales from the denim-driven collection done in partnership with Rock & Republic. Jeans featuring embroidered crowns on the back pockets and ribbed tanks with cheeky sayings such as “Royal Pain in the Ass” retail from $125 to $220.

“The power of celebrity keeps the customer interested,” he said.

That relationship is a two-way street for Beckham, formerly Posh Spice, who more than worked the velvet rope. Decked out in tight jeans barely four months after the birth of her third son, Cruz, Beckham signed autographs and chatted with fans, even staying an extra 45 minutes past her planned two-hour commitment at Kitson. Her sales pitch to shoppers focused on the fit of the jeans.

“I haven’t had much of a bum and these are good for me,” she said. “It’ll make your body look fantastic.”

Rock & Republic co-owner Michael Ball said the line is also selling at stores such as Harvey Nichols in London. He expects it to generate about $2 million. Beckham said she plans to add a men’s and children’s line to the mix.

Fashion is nothing new to Beckham, nor to her soccer star husband, David. She modeled for Rocawear’s advertising campaign two years ago. He has helped design a children’s line for Marks & Spencer, and recently developed a line of performance products, including sneakers, boots, hooded jackets, jerseys and pants in conjunction with Adidas. As a result, they like to trade tidbits of advice.

“We help each other out,” she said.

In town with her family, Beckham said she was taking the brood to Disneyland after her husband finished promoting his soccer academy in Carson, Calif., at the Home Depot Center.
— Nola Sarkisian-Miller

Limited Launches Jeans
The Limited will add denim to the mix next month. The Limited Jeans Collection is set to hit all 323 Limited stores on July 11. Elliot Staples, vice president of design for Limited stores, said the company previously focused on “wear-to-work” pants, but has now seen growing potential in the denim market. Staples said the chain will concentrate on dressing the consumer, not just for work, but “from Friday to Sunday afternoon.”

The denim collection consists of three fits: the Cassidy, a curvier fit with a lower rise; the Drew, a low-rise straight-leg style, and the Sexy Drew, a more snug version featuring a superlow-rise and slim-leg style. The three fits will come in classic five-pocket styles and multiple lengths. A trouser type also will be introduced as a “wear-to-work” style.

The jeans will come in five washes that range from a clean, light blue shade to a more tinted, dressier version.

The jeans will retail in the range of $59.50 to $98. The company declined to provide a projected retail volume for the Limited Jeans Collection.

The back pocket will feature a sideways, scripted letter “L” and in-store images will feature sexy cropped shots of women in Limited Jeans with the accompanying slogan, “Get in Our Jeans.”

“The direction was motivated by just telling our customer what we wanted them to do,” said Stuart de Haan, vice president of marketing for The Limited. “There is no ambivalence.”
— Lauren DeCarlo

A Win for Levi’s
Levi Strauss & Co. has come out on top in a legal battle with a former contract manufacturer in Mexico.

A civil appellate court in Mexico City on May 31 overturned a lower court ruling and vacated a $45 million award in a lawsuit filed by Compania Exportadora de Maquila Comexma.

Comexma filed suit after Levi Strauss conducted an unauthorized raid on the Mexico City plant in June 2001. The company’s outside brand protection counsel in Mexico failed to get proper approval for the raid from Levi Strauss and it turned up no counterfeit goods.

As part of its lawsuit, Comexma alleged the raid had harmed the manufacturer’s reputation, led to lost income and contributed to Comexma’s decision to close the facility.

On March 7, a trial court agreed with Comexma and awarded the company $24.5 million in direct damages and an additional $20.5 million for harm to reputation.

“In overturning the lower court’s ruling, the appellate court found that there was no direct relationship between the raid and Comexma’s decision to close the facility, that the damages claimed by Comexma were not caused by the raid and that there was no intent by the company to harm the former contractor,” according to a report filed by Levi Strauss with the U.S. Securities and Exchange Commission.
— Ross Tucker

Diamond in the Rough
Bringing premium denim to a new zenith, Paris-based Diamant Jean’s is a handmade denim line featuring real diamonds embedded in its buttons.

“I wanted to blend a basic product with something very precious,” said Patrick Mamou, Diamant Jean’s owner and creative director, who launched the line last year.

The denim firm’s baroque prestige collection also features red velvet appliques, embedded pearls, writing in gold thread, waistbands of Thai silk and extravagant buttons, including a detachable diamond and gold button stud that can bring prices to as much as 3,000 euros, or about $3,600 at current exchange.

“We have the most expensive jeans on the [worldwide] market,” said Mamou, noting that customers have the option of customizing their own jeans, too.

But bargains are also a girl’s best friend, so Diamant recently added an Access line offering slim-fit jeans for women that sell for about 250 euros, or $300. There is also its Rigoletto line for about 350 euros, or $420, at retail, featuring silk and leather trimmings and gold buttons.

Diamant Jean’s took center stage this month at the Paris-based department store Galeries Lafayette, where the denim firm is giving shoppers the opportunity to customize a pair of jeans. Shoppers may choose from a range of washes, styles and colors of silk embellishments.

Meanwhile, Diamant Jean’s will soon introduce a line of shirts and accessories such as cuff links and rings. It has also teamed with Swiss watchmaker TAG Heuer, owned by LVMH Moet Hennessy Louis Vuitton, to design bracelets for a line of watches expected to launch this fall.
— Emilie Marsh