The international jeans scene is playing it true blue for fall 2004-winter 2005, focusing on dark denim in more subtle, used finishes for a natural, “these are my favorite old blue jeans” kind of look.

Exhibitors and buyers at... 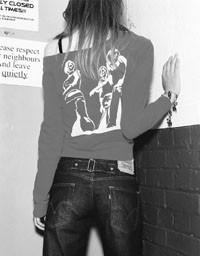 The international jeans scene is playing it true blue for fall 2004-winter 2005, focusing on dark denim in more subtle, used finishes for a natural, “these are my favorite old blue jeans” kind of look.

Exhibitors and buyers at Berlin’s Bread & Butter and Premium trade shows, which closed Sunday, said the jeans market is holding its own. Attendees said jeans remain a must-have item, even if the overall fashion market is less denim infiltrated than it has been in recent seasons. As Danish women’s wear retailer Helle Bahne, owner of the eponymous fashion boutique in Copenhagen commented, “Jeans are still very important. You need to have a good label for jeans in every shop. And if you look at the street, everyone is wearing jeans. Maybe you don’t talk that much about it, but jeans are still key.”

The new collections showed a few shifts in silhouette, with more fashion-forward groups including slim cigarette and wider stovepipe legs. Collections also reflected workwear, tomboy and bebop influences, as well as inspiration from the hardcore rock and punk scenes. For the mid-market segment, the look of tight jeans tucked into boots “is coming into mainstream in a big way,” said one European trend consultant.

“We keep talking about dark denim and clean finishes, and you do see it,” said a trend scout for a major American specialty store chain, “but it’s really about washed and vintage. All the washes going on are not overdone. People spent a lot of time and money creating a garment that really looks like you just found them….There’s not such obvious blistering. The focus is on subtleties.”

The Berlin fairs were hopping. Bread & Butter organizers sold 21,557 entrance tickets, up from 18,000 last season, with 42 percent of the visitors coming from outside Germany. Premium booked 8,500 visitors, compared with 5,500 last July, and 70 percent of the buyers were from abroad.

According to Premium’s co-director Anita Anic, only 10 to 20 percent of the show’s visitors represent an overlap with Bread & Butter attendees. Another 7,000 visitors also attended Berlin Fashion Week, a presentation of primarily men’s hip-hop-inspired labels.

Bread & Butter expanded its original jeans, street, sports-affiliated and small indie brand assortment to include contemporary men’s and women’s sportswear for a total of 380 exhibitors this season. The jeans sector was not the largest segment of the show, but it was certainly one of the busiest, and retained a collegial atmosphere, in which exhibitors admired one another’s collections.

At Tommy Hilfiger Denim Europe, vice president Frenzy van den Berg said, “It’s about American heritage with a European touch…Some say denim is not so hot anymore, but don’t believe it. We see a very tight leg coming back, and while low is still important, they’re higher in back. And we’re bringing in a men’s fit in girls sizes to wear baggy, and more workwear styles.”

Hilfiger used to offer the same jeans range in Europe as it shows in the U.S., but decided it was a bit too basic, van den Berg said. He added that women’s is now the focus in Europe, “because [the business] was behind, but we’ve caught up.”

As a result of the tough German economy, though, business conditions remain anything but easy, exhibitors said.

Aidan O’Meara, president of marketing for VF Europe said: “The jeans business is still pretty good, but the general economic climate is weak. Holiday retail didn’t create any new momentum, and retailers are being cautious and are unsure of direction. But that’s the environment one has to work in.”

He added that the outlook looks “more promising for this year, based on preorders and initial reaction.”

VF Europe’s four-year campaign to trade up the Lee brand in Europe, he said, “has born fruit. We’re attracting a higher-end distribution.”

“It’s all about trying to keep it fresh,” O’Meara said. “Finishing is getting more natural, but the the complete downplay that was predicted didn’t happen. Retailers want it more natural, but still quite visible. They want to show the variety.”

In terms of silhouette, he said “straighter and slimmer is coming through on the progressive end, but the mainstream is still driven by wider leg openings. There’s a bit of fragmentation.”

Lee also showed a group of women’s Lee Unionalls, with workwear styles in flat denim and herringbone khaki fabric, with a fashion slant — one item was a workwear-inspired jacket that could also be worn as a dress.

“The fit on top is squarer, it’s more tomboy,” explained Rosanna Iacono, brand director of women’s and premium. The Levi’s women’s range feature four silhouettes: slim Patti-Anne; the loose, cinched-back Mary Lynne, the boot-cut Marissa, and the straight-cut Eve, which can look sexy and glamorous worn with heels, or more tomboy when the cuffs are turned up.

“Our big push is square-cut. I think there’s a counter move to this over-femininity, which we already saw in Red and Vintage, but it’s now translating to the commercial level. Square, tomboy chic is about to happen,” she said. Levi’s plans to present its first European ad campaign for the women’s range in April 2004.

At the same time, companies like Blue System were showing tight and sexy rock-star-inspired looks, with jeans featuring an open back, intended to reveal small-of-the-back tattoos on those who have them, said designer Allessandro Vigano. Other styles featured big graphic appliqués on the front.

“Denim is growing up,” Vigano said. “Basic denim is finished, but lots of brands are coming up with different denims and different washes. It’s not just denim where you make big numbers, but it’s more about small numbers. Everyone has to be original.”

Under Potsdamer Platz, where the Premium Sportswear Couture show is held in subway tunnels, denim collections including Blue Blood and Serfontaine showed styles that focused on subtle touches and fine distinctions.

The Amsterdam-based Blue Blood, now in its third season, showed only jeans that were cut on the bias “to achieve great fit,” according to designer Jason Denham. Special tailoring details included lipstick pockets incorporated into all front pockets, chambray-lined inner yokes and piping inside the fly.

“If you look at the market today, finishing is very important and fashionable. A consumer can look at the jeans, and doesn’t need to know how it’s done but can see it is overprocessed and very chemical,” he said. “We try very subtle, more delicate effects, like light scratching or vintage burn.” The latter treatment featured small, half-worn dots that look like someone dropped a cigarette along the back of the jeans.

Los Angeles jeans specialist Mik Serfontaine made his first foray to the Berlin shows this season. (Previously his brand had been represented by an agent.)

“There’s been so much interest in Europe,” he said. “Europe gives you prestige, and Europe sets trends, even though the U.S. is catching up on that front. But U.S. customers like to see us sold here.”

He added that the relative strength of the euro compared with the dollar also makes Europe an appealing market — since the currency difference effectively lowers the price of U.S. products.

The Serfontaine approach is labor intensive — the company can turn out only three pairs of jeans an hour.

“Everyone is in love with their favorite pair of jeans, and wish they could find and wear them again,” he said. “We want people to think of us as the vintage denim people.”

Berlin has its own homegrown vintage jeans label: Ace by Dress-o-Rama. After collecting and dealing in vintage clothing for years, Dress-o-Rama moved into wholesale last year with a range of Forties- and Fifties-style print dresses and retro Japanese denim jeans. Their two current jeans styles are the Juke Box Rock 1959 and Blue Jean Bop 1956 models, in rigid vintage denim featuring embroidered racer wings on the back pockets, cinch backs, and a “nothing sexy here” straight leg fit, according to Dress-o-Rama’s co-founder Alex Graalfs.

In other news, the organizers of Bread & Butter — Karl-Heinz Miller, Kristyan Geyr and Wolfgag Ahlers — said they have bought one of their main show buildings. The newly formed Bread & Butter Real Estate bought the Siemens Kabelwerks, which has 210,000 square feet of exhibit space, for an undisclosed sum last month.

The show organizers said they are considering using or renting the halls out for other “lifestyle” events, but said they wouldn’t be available for “conventional” shows.

“We don’t want to use the halls in an inflationary way,” said Geyr.