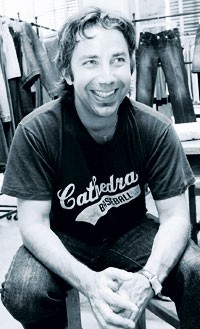 Jerome Dahan is on his own now and has his eye on international expansion and new licensing deals for his high-end jeans brand, Citizens of Humanity.

For most of the last four years, Dahan had worked closely with Michael Glasser. The two founded the Seven For All Mankind line in 2000 and in 2002 started Citizens after a dispute with their former backer, Peter Koral. A judge last month awarded Dahan and Glasser about $56 million as the result of a suit they filed against Koral. Glasser decided to sell his stake in the Huntington Park, Calif.-based Citizens to Dahan and step down from the company.

During a stopover in New York last week, Dahan said Citizens will remain on its current track.

“I’m doing what I’ve been doing for the last 20 years, I’m focusing on denim,” he said. “I’m not intending to drive the company into something huge. I want it to be stable and sustainable.”

He said Citizens is on track to ship $65 million worth of goods this year, mostly in the U.S.

“I’m not trying to do it bigger and bigger next year,” he said. “I want to do more in different countries.”

He said he’s looking into licensing deals in the sunglasses and footwear categories, but plans to move slowly on developing those areas.

Dahan said it is crucial with a superpremium brand such as Citizens to find licensees willing to pay the same attention to detail that he does. For instance, he asked knit tops licensee Swat Fame to sew the pockets on sweatshirts with the type of sewing machine normally used to attach the cuffs on jeans — a slower machine designed to go through several layers of heavy denim. It was extra effort, but to Dahan represented the type of detail his customers want.— Scott Malone

Mexican denim mill Telas Parras, following the lead of dozens of jeans companies that have started chasing higher-end business, is rolling out a fabric line called Premium by Parras.

The Premium line will be priced about 25 percent higher than the company’s main product range and will be targeted at jeans retailing for about $60 to $80.

Fuhr said he didn’t expect Parras’ denim to displace high-end U.S., Japanese and Italian denim in superpremium jeans, but added, “There’s an entire market between $60 and $80.”

The move also comes in advance of the end of fabric and garment quotas on Jan. 1 by the 147 nations of the World Trade Organization. That event is expected to provoke a surge of competition, with textile and apparel makers slashing prices as they fight for market share. Mexico’s industry is particularly vulnerable to competition from Chinese mills — China has already displaced Mexico as the U.S.’s leading supplier of textiles and apparel.

“Mexico is going to have to figure out how to make up for a 15 to 20 percent loss of capacity, because that basic business is going to go away,” Fuhr said.

This would allow makers of higher-priced jeans to keep their production in the Western Hemisphere, which would increase the odds of them using Mexican denim.

Fuhr said Parras has worked closely with wash-development firms, such as The First Finish of Los Angeles, to ensure that its fabrics can produce distinctive washes.

“Today’s conversations are not just about fabric anymore, it’s about what can you do to the fabric,” said Fuhr. “A customer who’s going to try you for the first time wants to see how far you can go.”

Parras, which also operates a joint-venture denim mill with Cone Denim, produces about 100 million yards of denim a year at its three Mexican facilities. Fuhr said the firm hopes about 10 percent of its production will go toward the Premium line.— S.M.

Guess Inc. has joined the premium denim fray for fall with a line aimed at the contemporary customer.

Jeans in the line will have the word “premium” on the inside waistband and two Gs on the back pocket. The fabric for the premium line is imported from Italy and the jeans are manufactured in Los Angeles.

“This is a strategic initiative to upgrade our product and appeal to the more contemporary customer,” said Nancy Shachtman, president of Guess Inc.’s wholesale division. “We don’t want to be part of that price-driven junior category. We’re upgrading from a design point of view, too. Creativity is not limited by price.”

This is the second recent brand extension at Guess. In September, the firm launched Marciano, a nondenim collection with more sophisticated styles that is 30 percent more expensive than the core brand.

Shachtman said the company “spent a long time developing the line,” which wholesales for $48 to $78, compared with $34 to $45 for the main line. “Maurice Marciano [co-chairman and co-chief executive officer of Guess] was very involved in creating the washes. He’s a denim guru.”

The premium line is currently found in 130 specialty and department stores, and some of them, such as Bloomingdale’s and Lord & Taylor, will no longer carry the regular Guess jeans line.— Lauren DeCarlo

The Los Angeles-based company that produces the Tyte jeans line has named Steve Kaplan to the new post of president of its Duplex misses’ brand, which is launching for spring retailing.

Kaplan, 41, is based in New York and oversees all of the brand’s sales, marketing and merchandising. He reports to Alden Halpern, president and chief executive officer of 4Whatitsworth Inc., the parent company. Kaplan last served as executive vice president of Kellwood’s Vintage Blue denim division.

Duplex offers designs similar to those of the Tyte junior jeans line, including slubbed and cross-hatch denim jeans, but with misses’ fits. It wholesales for $38 to $95.— S.M.

Petrojeans, which is rolling out a status denim line for spring retailing, has named Todd Picciano national sales manager for specialty stores. Picciano, 30, most recently worked in sales at Allen B. jeans by Allen B. Schwartz. He previously worked on lines such as Dragonfly and G-Star. Picciano is based in Los Angeles and reports to president William Chu.— S.M.