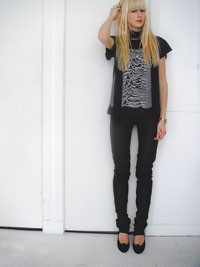 Despite the show’s opening day falling on the Martin Luther King Jr. holiday, exhibitors said their booths at the Jacob K. Javits Convention Center were busy with buyers seeking out the latest brands and styles.

“A lot of buyers came specifically to get something new,” said Andrea Ruse, a sales representative with Born in California, a denim line that launched at the show.

Buyers expressed interest in denim miniskirts and Bermuda shorts as well, according to Ruse, who noted that back-pocket detailing remained a strong trend.

“The buyers we’ve seen love the back-pocket design on our jeans and they want to see more of it,” said Ruse.

At the high end of the premium denim market, designers noted strong responses to dark and raw washes.

“They’ve been drawn to our grays because it’s something they haven’t seen,” said Aubrey Reichard, a representative with CK39 jeans, Calvin Klein’s line of superpremium denim. “[Buyers] are still looking for subtle differentiation between the CK brands.”

Reichard also saw buyers using the show to get an early look at the trends and styles that will be on display at the Las Vegas edition of Project in February.

“They’re scoping things out here and planning on buying at the Vegas show,” said Reichard.

Gianpiero DiBitonto, vice president of sales at Jet Lag, said the quality of washes was now a more important feature to buyers, rather than the range of embellishments that have been shown in recent years.

“What separates stuff out is the washes,” said DiBitonto. “People ask for black jeans, but it’s not the traditional jet black. It needs to be treated.”

The Jet Lag label has been sold in Europe since 1992. It takes six weeks to manufacture one pair of jeans, according to DiBitonto, who said the company’s European operations produce 2,000 jeans a day. The company has made a push into the U.S. market within the last year, with its jeans wholesaling for $99.

“Since the denim market is flooded, for a new company like us, it was difficult to get in,” said DiBitonto, adding that the plethora of denim players has made it difficult for retailers who come to shows and are overwhelmed with brands.

He said the company is selling in 400 doors and expects to double its business this year. DiBitonto offered a rare dissenting opinion regarding the dark-wash and clean-look trends.

“In the last eight months, you’ve been hearing about dark, clean lines,” he said. “But our top seller has nothing dark or clean about it.”

Angela Libani, a sales representative with Aerea Denim, said the brand has been focusing on building on its core denim offerings that hit the market last year to include more luxury items.

“The market is saturated with denim … so you go higher on quality,” said Libani.

“People wanted a total look,” said Libani of the decision to quickly expand beyond denim.

Aerea is capable of turning out only 200 denim pieces a day as a result of the amount of handcrafting required.

Libani also noticed a degree of confusion among some denim buyers at the show.

“Retailers are worried about the rise,” she said. “Should it be low or high or middle? They’re not sure what they should be getting.”
— Ross Tucker

The Skinny on April 77
Brice Partouche doesn’t miss a beat when it comes to offering up-to-the-minute denim trends. The drummer-turned-designer of Paris-based label April 77 has been perfecting his spray-on denim look since 2002, long before style icons such as Kate Moss and Sienna Miller made it popular.

“When we first came out it was basically a flop,” said Partouche.

But since the skinny fit is the ubiquitous denim look for boys and girls right now, Europe’s most popular denim boutiques can’t seem to get enough of the brand. These include merchants such as London’s Dover Street Market and Selfridges, Paris’ La Boutique and Kiliwatch, Stockholm’s Weekday and Le Shop and Denmark’s Storm. Considered premium, yet affordable, April 77 jeans sell at retail for between 70 and 120 euros, or $85 to $145.

“We want to position ourselves as the most price-conscious label in the most trendy shops around the world,” said Partouche, who recently extended his distribution to Isetan in Tokyo and Lane Crawford in Hong Kong. Sales for 2004 reached 1.2 million euros, or $1.5 million, from 643,000 euros, or $778,000, in 2003.

Partouche, who was born in April 1977, is no novice to the denim trade. His father created the classic French denim label Grenoble, based in Bonaventure. It also helps explain April 77’s devotion to classic unwashed denim.

“I let the others fight over the washes,” he said.

Instead, Partouche has concentrated on adding a more rock ‘n’ roll touch to his mostly unisex collection. It’s fitting for a man who returns to Grenoble each weekend to rehearse with his band, Rodeo Massacre, from the comfort of his parents’ basement.

“It’s a masculine product aimed at girlfriends who swipe their boyfriend’s jeans,” he said.

The label’s bestseller, the Dee Dee jean, is recognizable by five diagonal zippers and has been worn by the likes of Ron Wood of the Rolling Stones.

Looking ahead to next winter, Rockabilly jackets for men and women in lacquered cotton with metal stud detailing, and the Teddy, a fitted wool jacket named after The Teds, are expected to be hot picks. There are also more skinny looks in gray, red and unwashed denim. Partouche said zebra and leopard-print denim are in the works as well.
— Emilie Marsh

“We’re joining the Blue Holdings family of brands,” said Duffty. “Our collection will continue with the same focus on recycled vintage, but we’re also going to build on a premium denim line, as well.”

Duffty described the agreement as a 50-50 venture between the two companies that will see his brand among Blue Holdings’ Antik Denim, Yanuk and Taverniti brands. Duffty is also counting on the venture to strengthen his relationship with high-end department stores, as well as provide him with the manufacturing resources to produce larger orders.

“I think one of the things that we have been looking to do is work in a much more meaningful way with the department stores,” said Duffty. “Dealing with volume business is difficult with us because we’re small. This will allow us to continue with our specialty store business, but allow us to get in a more serious relationship with the bigger department store groups.”

Working primarily with vintage and selvage denim has been an obstacle to Duffty fully entering the women’s market.

“Women’s is much more about fit,” he said. “We’ve never been able to address them because it’s difficult to find vintage denim that fits in a contemporary way.”

Sourcing has been another challenge that Duffty is counting on the Blue Holdings venture to solve.

“We had worked with denim manufacturers out of Italy and Hong Kong,” said Duffty. “But the minimums required for the initial start-up were so high that it was difficult to get the ball rolling. That’s something that a lot of small designers face.”

Duffty has already produced a limited number of samples, some of which he showed at the Project show in New York this week.
— R.T.

Peter Caminiti started Aug. 1 as president of sales for Tyte Jeans and all other divisions of 4Whatitsworth Inc., the brand’s parent company. Alden Halpern, chief executive officer, will continue to oversee design, manufacturing and operations of all divisions.

Caminiti has signed 25 new accounts, including Federated Department Stores and regional specialty stores across the U.S., and has set a $1.5 million advertising budget for the year’s back-to-school season.

“We’re going after the junior girl, who I think has been tremendously neglected,” Halpern said, noting that his target consumer is between the ages of 13 and 20.

Tyte’s denim collection features 75 to 100 pieces each season. Halpern said his team of seven designers is constantly coming up with fits and styles usually found on more expensive lines.

In the past 18 months, Tyte has signed five licensing agreements, with more expected this year. The brand has entered into categories such as handbags and accessories, children’s wear, junior knit tops, outerwear and sweaters.

This is the second time Halpern and Caminiti have teamed up. They met at Breaker Jeans 13 years ago, where they worked as road representatives and sales managers. Halpern went on to become president of Breaker Jeans before moving to Los Angeles to found 4Whatitsworth, which also owns Duplex, Beau Dawson and World Academy. Caminiti joined L.E.I. jeans, where he stayed for eight years before becoming president of sales in 2003. He left the company in March.
— Lauren DeCarlo