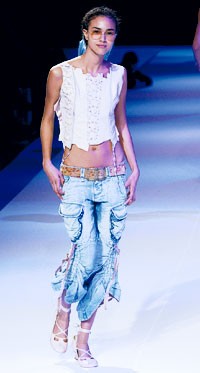 With jeans this season, it’s the more the merrier. With dozens of brands jumping into the jeans business in recent seasons, one could easily think that overloaded specialty store and boutique buyers would be ready to shout “enough, already.” But as they look at spring receipts, retailers report that a flood of new ideas appears to be keeping consumers interested and opening their wallets.

Specialty retailers said the jeans business has been strong through March and early April, with shoppers looking for lighter washes, slightly narrower leg openings and waists that are still below the navel, but above the overly revealing depths of a few seasons back.

In addition to high-end mainstays, including Seven and Citizens of Humanity, buyers cited James Jeans, Rock & Republic and Blue Cult as strong performers for the season.

“A lot of the customers are excited that there’s new lines coming out,” said Irene Kandhorov, owner of Austin Jeans and Inside Jeans in the Forest Hills section of Queens, N.Y. “Not everyone is interested in just Citizens of Humanity and Seven anymore. Everybody wants to look different.”

“Initially, I was, ‘Oh, no. It’s going to get saturated,’” she said. “But you know what? New people are coming in, and they want new jeans, they want a new company. Girls are sick of wearing the same exact jeans that everybody else is wearing.”

Buyers said the flood of new brands has also given consumers the choice of a much wider array of washes and rises, making it harder to predict fashion trends than it was a few seasons ago.

Looking at the high-end, $100-and-up market, Thomas George, owner of E Street Denim in the Highland Park, Ill., suburb of Chicago, said, “Five years ago, six, seven, eight [brands] were competing for all that money. Now we have something like 80 to 150. There’s so much more competition. It just dilutes the ability to focus in and say, ‘This is right and this is wrong.’”

George added that the increased competition has also driven vendors to offer higher-quality jeans featuring better-constructed seams, sculpted waistbands and more involved finishes. He said consumers have come to expect this in premium jeans, which typically go for retail prices exceeding $100 and approaching $200 — three to four times those of department and chain-store brands.

“I understand New York and L.A., but let’s talk about the real world,” he said. “They don’t sell just because they’re $150. What I’m finding is you better be freaking good. [Consumers are] examining what they’re getting.”

He added that he’s had strong results lately with lines priced around $80, including Big Star and Lucky, as well as the higher-priced lines Seven, James, Blue Cult and Citizens of Humanity.

At Chicago-based Lark Stores — a 12-unit chain with locations in Chicago, St. Louis, Indianapolis and Charlotte, N.C., and which will be opening a store in Memphis in October — president Leonard Rothschild said, “Our business for March was great. The customer is out there looking for new ideas.

“Brand-wise, we’re doing great with Baby Phat, Rocawear and [Marithé & François] Girbaud. Girbaud’s women’s denim is our number one jeans. Their strap jeans, with a small strap at the bottom in lots of colors, has been our real star. The women’s line has really turned around.”

“Citizens and Seven are always hanging in there. They’re stealth sellers — the next thing you know, you’re out of them,” she said. “AG [Adriano Goldschmeid] is doing really well also.”

In terms of trends, she said, “We’re having a pretty good response to the fact that the rises are coming up a little bit. People are excited about that.”

While popular styles still sit below the navel in the front, Pozzuoli said it’s become critical for jeans to have sculpted waistbands, which rise higher in the back.

“Their booty is not coming out,” she said. “It makes such a huge difference.”

Other retailers agreed that consumers are looking for slightly higher — and better engineered — rises. Merchants also said narrower leg openings are becoming more popular, with shoppers looking for boot-cut, rather than flared, styles.

“I brought in some skinny straight legs, but there’s some resistance to that still,” said Kandhorov, of Austin and Inside. “The low, low rise is obviously done. They’re going for a little bit higher waist and a little cleaner. They’re not interested in all that crazy pocket detailing any more. It’s not as junior-y.”

Overall, buyers said they were expecting a strong season, with sales growth tracking into double-digit percentages for the category.

Continuing sales declines in all three of its divisions drove denim maker Avondale Mills Inc. deeper into the red in its second quarter.

In a recent filing with the Securities and Exchange Commission, the Monroe, Ga.-based company reported a $5.4 million net loss for the period ended Feb. 28, compared with a $342,000 loss a year earlier. Sales were down 8.5 percent to $141.6 million.

Profits eroded sharply at the company’s apparel-fabrics unit, which reported income of $479,000, compared with $6.1 million a year earlier. Sales at the unit fell 14.6 percent to $105.6 million. Yarn profits fell 16.2 percent to $470,000 on sales that eroded 9.9 percent to $46 million. Other revenues — including gray-fabric sales and a trucking business — were down 17.5 percent to $14.1 million, with profits off 42.9 percent to $880,000. The company booked $41 million in interdivisional sales, primarily of yarn and gray fabric to the apparel-fabrics unit. That compared with $36.1 million in interdivisional sales a year earlier.

In the filing, management said the sales declines “primarily reflected lower unit volume for all segments, as imported apparel continued to capture market share of domestic retail sales, and weak employment and economic conditions within the U.S.”

The company also disclosed it has received a subpoena from the U.S. Justice Department’s antitrust division regarding the open-end spun yarn business. Earlier this year, Parkdale America LLC — a joint venture of Parkdale Mills and Unifi — had acknowledged it was being investigated by the DOJ.

A DOJ spokesman confirmed that the department was investigating the cotton-yarn industry, but declined further comment. Avondale officials said “based on the information currently available, management does not believe that the outcome of this matter will have a material adverse effect on the company’s financial condition.”