Elio Fiorucci made history in the Seventies with his eye-popping graphics, cheeky advertising and fun-loving clothing. His brand lives on under a different ownership, Edwin Co. Ltd. 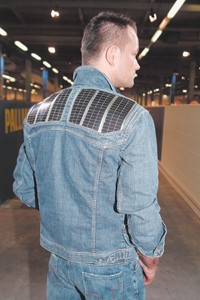 Fiorucci Expanding To Canada, Asia, U.S.
Elio Fiorucci made history in the Seventies with his eye-popping graphics, cheeky advertising and fun-loving clothing. His brand lives on under a different ownership, Edwin Co. Ltd.

The Japanese company, which owns the denim line, now simply called Edwin, also holds the Lee and Wrangler licenses in Japan, and bought the Fiorucci trademark in 1990.

After several setbacks marked by management problems, and production and delivery hiccups, Fiorucci is back on track and expanding its distribution globally. The brand is again available in the U.S. through an agreement with Target, which sells the label in dedicated corners. Also, Fiorucci signed an agreement with Fairweather, one of Canada’s main retailers, to start distributing the line in that market next month and is working with Itochu, the Japanese trading and textile giant, to expand the brand in Asia.

“The Asian market is growing faster than expected,” Masahiko Kawai, managing director of Fiorucci Design Office SrL, said in an interview at the company’s Milan headquarters. During the past year-and-a-half, Fiorucci has opened 14 stores in Korea; 13 in Hong Kong, Macau and Shenzhen; one in Tokyo, and one in Bangkok. There are 129 Fiorucci corners and stores around the world. Fiorucci also has a new store on Tokyo’s Omotesando that sells accessories and clothing pieces for pets.

“We’re selling a lifestyle, and brand awareness in the U.S. was not as strong as in Europe and Asia,’’ said Kawai, who believes an affordable price is a plus for the label. “For this reason, we thought Target was our best choice: The brand is quickly available and we can fully present Fiorucci’s image. Consumers are not stupid and they don’t spend just because it’s a brand.’’

A Fiorucci jacket retails for about $50 and cropped denim pants retail at around $40. Kawai said denim pieces and T-shirts, which are called T-arts at Fiorucci, given the company’s graphic experimentation, are the brand’s best-selling items.

“We’ve been doubling sales each season,” said Tarcisio Galavotti, general manager and co-owner of Italian Fashion, founded in 1983, which has held the Fiorucci license for Europe and Russia for two years. The company, based in the “blue valley,” Urbania’s denim district in central Italy, has also worked with brands such as Fornarina, Kookai and Swish. For 2006, Galavotti estimated a wholesale volume of $9.5 million, or 8 million euros, at current exchange, for the Fiorucci license.

“Fiorucci continues to be a very appealing brand and retailers are always willing to check it out,” Galavotti said, adding that push-up pants under the Edwin trademark “Miracle Denim” introduced in the fall were great hits and that the company will present a new version in April.

The company also is reworking Fiorucci’s historical “Buffalo Denim,” a basic five-pocket model. “The fit was the outstanding quality of the Buffalo. We have set up dedicated laboratories to work on a new, more contemporary fit,” Galavotti said. He noted that the new Buffalo for spring 2007 will be dark denim, with a vintage effect. Galavotti said he was looking at retail spaces in Milan and hopes to open a store in that city in the near future.

Today, Fiorucci has 12 licenses for items ranging from bags and accessories to stationery, makeup and underwear. Kawai said he left control and production of the brand in Italy. “This is where it should all be happening,” he said. The executive said he hopes to expand the number of licenses “to better convey an idea of lifestyle at retail points.” Kawai declined to disclose company sales, while pointing out that turnover “is increasing drastically, as we keep developing [our] business worldwide.”

Edwin, meanwhile, is still involved in a lawsuit against Elio Fiorucci, who has reprised designs with his new brand, Love Therapy, which Edwin claims is unlawfully in competition with Fiorucci. Kawai said he respected the designer as “a pioneer,” and that he did “not want to fight, but [Elio Fiorucci] creates confusion and the company has the responsibility to protect the brand.”
— Luisa Zargani

Bogner Turns Up the Heat
Amid worries about rising fuel costs, a German fashion label has developed a jacket with its own energy source. Bogner Jeans has presented a solar-powered jeans jacket in Berlin that allows mobile electronic devices to be recharged through the jacket.

Solar panels integrated into the jacket are connected to a cigarette pack-size battery that is charged by the sun. The energy is stored in the battery, which is a backup for nights or cloudy days. Electronic laptops, cell phones, MP3 Players or reading lamps can then be plugged in and recharged. Bogner said the technology potentially may be used for heating ski jackets.

Although the prototype solar-power jeans jacket still has some problems — the solar panels are not yet washable and don’t look particularly stylish — Bogner stressed that it intends this to be a commercially viable project, not a one-off gimmick. In the second half of 2006, the next generation of solar-powered jackets will be displayed and they should hit stores in 2007. Bogner has not yet announced the cost of the jackets.

The prototype has been designed for men, but when the jackets roll out later this year, they will be available in women’s styles, too.

The prototype is part of the Solartex project, a collaboration between Bogner Jeans, an innovative jeans and sportswear label launched in 2001 by Mustang, and local technical universities. The project is financed partly by the regional Baden-Württemberg government in southwest Germany.
— Damien McGuinness

For the three months ended Dec. 31, the Commerce, Calif., premium denim manufacturer reported earnings of $1.3 million, or 5 cents a diluted share. Year-over-year comparisons were not available because Antik and Taverniti began operating in September 2004.

Paul Guez, chief executive officer and president, said during a conference call with analysts that pursuing a multibrand strategy provides the company with the protection of diversity and allows for a quick response to consumer demands.

“Our three brands give us the ability to react to different trends,” Guez said.

Guez said he is focused on adding brands to the portfolio, and expanding the company’s retail operations.

“My goal is to have six to 10 brands and between 100 and 200 retail stores where I’ll have my brands and others,” said Guez, who added that some of those stores would appear as early as this year.

Eric Beder, an analyst with Brean Murray Carret, said Blue Holdings is poised to become the next major player in the premium denim arena. “The company has probably the most unique stable of brands in the industry,” Beder said in a research note previewing results. Beder also said the company’s plans to open a chain of boutiques to showcase the Blue Holdings brands were “extremely appealing, especially with the high margins and productivity in selling premium denim products directly.”

Guez also touted the success of the Antik basic collection, a lower-priced offshoot of the Antik Denim brand that first shipped in December 2005. “The initial reception from the basic brand has been fantastic and we have seen no negative reaction to our higher-priced jeans,” he said. The program has been so successful that Guez said the company plans to introduce basic collections for Yanuk and Taverniti.

For the year, the company reported earnings of $5.1 million, or 20 cents a share. Sales for the year were $36.4 million; Antik accounted for 70 percent of sales.

Guez dismissed any concerns that the premium denim market would lose momentum this year.

“I’ve been in the denim business for 35 years, and every year people get a little concerned about if it will be ending this year,” Guez said. “Well, it will never end. Every year something new will happen that will make the denim go on and on.”
— Ross Tucker