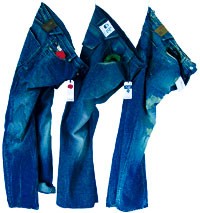 “I happen to be 40 years old, I am not in bad shape, I’m 5-foot-8-inches and I cannot put on a lot of these jeans,” she said. “If I do get them on and they do fit, my butt shows. I have to take three or four sizes bigger” than her usual size 8.

Thinking that she wasn’t the only shopper left behind by the low-rise trend, Rudes-Sandel, who grew up working on her family’s former jeans brand, Saint Germain, last year introduced the Not Your Daughter’s Jeans line. With wholesale prices from about $30 to $35, the line offered jeans in an array of washes and fabrics, but with nine-inch rises that hit at around the navel, a height that Rudes-Sandel said was more comfortable for many women in their 40s, particularly those who have given birth.

Working with her sister Leslie Rudes, who handles the operational side of the business, she is preparing to launch a line of higher-priced, more fashionable jeans called Pearl for holiday retailing.

Rudes-Sandel described Pearl jeans as being “a little more hip,” with an eight-inch rise that would typically hit a little below the navel.

The rise of a pair of jeans is the measurement from the crotch seam, where the front and back panels are sewn together, to the top of the waistband. During the peak of the low-rise trend, jeans designers were rolling out styles with rises of as little as four or five inches, which would push the limits of public decency laws in some communities and could hit about six inches below the navel.

Low-rise styles now more often have rises of about six inches, which can still hit four to five inches below the navel.

Rudes-Sandel said the Pearl and Not Your Daughter’s Jeans lines would offer fashionable silhouettes and washes, without bearing skin.

“They’re not dumb and ugly, but they don’t hit so damn low where all her bulges are sticking out,” she said.

Rudes-Sandel said she expected the Not Your Daughter’s Jeans line to generate $2 million to $2.5 million in sales this year, and approach $5 million next year.

“We’re a small company and we love it like that,” she said. “We don’t want to blow up the bubble and then burst it.” — Scott Malone

A Pair of Blue Bloods

Sam Ben Avraham, operator of New York’s Atrium boutique and founder of the Project trade show, is getting into wholesaling as he continues an evolution from owner of a trendy store to denim impresario.

Avraham has founded a company, Moshi Moshi America, to sell the Netherlands-based Blue Blood line, designed by Steve Te Pas, in the U.S. Avraham said he had been selling the line out of Atrium for about a year with good results.

“When I was just doing retail, I didn’t think about it,’’ Avraham, 38, said in an interview last week at his office space in Manhattan’s Meatpacking District. “But when I started doing the show, I saw the options. I saw this collection and I thought ‘I have to do it’ because if someone else took it and I had it in my hand, I’d be frustrated.”

Jeans in the line wholesale for about $85 to $170, and are intensely worn and treated. One style is covered with small abrasions intended to evoke years of hard wearing, while another features about a half-dozen ironed-on patches.

In addition to the main Blue Blood line, there are two subbrands. Dry Goods features unwashed dark denim, and For Our Friends offers particularly abused jeans.

Te Pas launched the line this spring after several years running his own sales company, Moshi Moshi Inc. The Blue Blood line and its spin-offs generated about $8.5 million in sales their first year.

Te Pas and Avraham said they’d met about two years ago, and Te Pas, 34, said his associate’s success with the Project show had inspired him to start his own trade show in Amsterdam called District.

“For us, it’s all about entrepreneurship,” Te Pas said. “You build something and you run it for years and lose money, and suddenly it’s successful. We don’t spend all the money, we invest it, create our own worlds.”

Avraham said he had no plans soon to start representing other denim brands.

“For the next two years, we’re going to just take this and develop it before we think about doing anything else,” he said. — S.M.

The Los Angeles-based maker of the Tyte junior sportswear and Beau Dawson contemporary brands has turned its attention to the misses’ market.

For spring retailing, the firm, known as 4Whatitsworth Inc., is launching a line called Duplex. It will feature designs similar to those seen in the Tyte line — including slubbed and cross-hatch denim jeans — in fits that better accommodate an older body.

Wholesale prices are to range from $38 to $95, and the company aims to generate $3 million in first-year sales.

“The misses’ market is desperately in need of an updated fashion resource at the same price point as basics,” said Alden Halpern, president and chief executive officer of the firm. — S.M.

Lawman Inc., the Los Angeles-based jeans company, is rolling out a new brand for spring called Petrojeans that is targeted at the status price point of $50 to $60.

That tier was a key component of the denim world through much of the late Nineties, although during the past year many major American designer names — Tommy Jeans, Polo Jeans Co. and Calvin Klein — have looked to raise their prices to compete with higher-priced jeans that offer details such as more intricate washes and Italian or Japanese fabric.

Dozens of companies are packed into the premium and superpremium $100-and-up price tier, and price competition remains intense in the moderate market.

William Chu, president of Lawman, said Petrojeans is targeted at shoppers who might occasionally spring for a pair of jeans with a triple-digit price tag, but who need cheaper jeans for everyday wear.

“The premium jeans market is very hot right now, but you can’t spend that much money on every pair,” he said. “We can’t possibly try to squeeze into that high-end market.”

Chu, 31, joined his family-owned company two years ago after several years working in investment banking and consulting. The company, which owns factories in southern China and Hong Kong, was founded about 35 years ago in Hong Kong and opened a U.S. office some 25 years ago. In addition to the new line, it sells the Lawman brand of Western specialty jeans. The line, to ship in January for spring retailing, will initially include about 15 styles each for women and men. Jeans will wholesale for $20 to $30.

Chu estimated that Petrojeans will generate $2 million to $3 million in sales its first year. The brand’s name is intended to play on the word “petroglyph,” which refers to words carved in stone, from Greek roots, he said.

Some might first associate “Petro” not with stone but rather with “petrol,” as gasoline is commonly called outside the U.S., suggesting a play off the Diesel brand.

“That’s what most people think,” Chu said. “I can’t control that…but I am the only one that can attest to the real origin of the name.” — S.M.