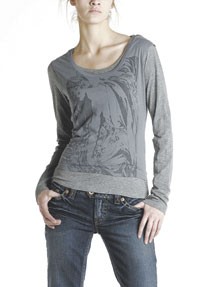 For the quarter, income was $7.5 million, or 19 cents a diluted share, compared with a loss of $912,000, or 3 cents, in the year-ago period. Licensing income was $12.4 million versus $2 million. In the year-ago period, the company also had $5.6 million in sales, but was in the midst of transitioning into a licensing business model.

Neil Cole, chairman and chief executive officer, said in a statement that 2005 “was the first full year under our exciting new brand-management and licensing business model and it was the most profitable year in our company’s history.” He added that fourth-quarter results were boosted by better-than-expected licensing revenues from the Candie’s and Rampage divisions.

The company reaffirmed its previously announced 2006 full-year earnings per share guidance of 65 cents to 70 cents a share.
— Vicki M. Young

Silver Jeans Adds on Tops
Silver Jeans is branching out with a collection of tops for women and men.

Michael Silver, president and founder of the 15-year-old Winnipeg-based denim brand, said the tops collection would be a standard part of the brand’s offerings. The focus has been designing a limited range of tops that will specifically complement its core denim products.

“We held off putting energy into tops because I’ve been a proponent of the idea that you should do what you do best,” Silver said. “Over the last 10 years, we’ve done tops from time to time, but I never felt I applied myself. We were getting a lot of pull from retail and through the Web site about why we don’t do tops.”

Silver sells in department stores such as Nordstrom, Dillard’s and Marshall Field’s, and at specialty stores like The Buckle.

He spent eight months developing the line, bringing in staff with expertise in the tops market who understood his desire to create items that achieved the same level of quality as the bottoms business.

“Tops has become this disposable element of clothing,” said Silver, adding that consumers tend to hang onto a pair of jeans for longer periods of time.

Applying the same standards for a high-quality fit in bottoms should carry over to tops, Silver said, adding, “We just decided that we would get to the root by making sure we would be nuts about fit.”

The women’s collection consists of 12 nonlogoed items, including T-shirts, jackets and long-sleeve jersey shirts. Creating items that allowed the wearer to achieve a layered look was another design focus. For men, the company is offering eight styles. Retail prices for the tops are $49 to $120.

The tops made their debut at MAGIC in Las Vegas last week and garnered a strong response from buyers.

“We held our breath a little to be quite honest,” Silver said. “We were very pleasantly surprised…they absolutely verified that we were on the right track.”

The success has given Silver confidence to expand the tops collection, but in a controlled and deliberate way.

“We want to be careful because whatever we deliver to stores has to be significant or we’ll get lost in a sea of tops,” he said.
— Ross Tucker

Prada Piles on the Denim
Miuccia Prada created an about-face in fashion last week in Milan with her dark and layered fall collection. In the world of Prada, however, denim remains a constant.

A year after launching a full-fledged denim line, Prada has expanded the collection without the usual accoutrements of premium denim lines. Nonetheless, its clean dark jeans have gotten the attention of retailers and celebrities like Madonna, who wore Prada denim in her recent music videos, “Hung Up” and “Sorry.”

Carla Sozzani, owner of Corso Como 10 in Milan, said she was picking up the denim collection for fall.

“[Prada denim] is a little different,” she said. “It’s less casual and there’s a good market for it.”

Cedric Charbit, general merchandise manager at Printemps in Paris, said the denim segment had given Prada more “visibility” and taken the brand “into the street.” He acknowledged a difficult first season because of fierce competition from well-established denim brands, but said Prada denim, especially the skinny models, was selling well this spring.

In its first three seasons, Prada denim has reached 1,000 sales points worldwide, including Prada shops. While Prada said Italy, the U.K. and the U.S. are its top markets, the company declined to give a sales figure for the denim collection.

The fall collection counts 24 washes and 12 fits. The house focuses on a classic trouser shape cut in Japanese denim and sometimes dyed, over-dyed and then stonewashed. Back pockets are fastened with buttons, and straight-leg pants often come with pleats.

The Prada moniker, once laser-cut or printed on the back pocket of jeans, appears on leather or black metal strips. The label is one of the few embellishments in the collection.

One structured, skinny model features a zipper on the calf; a micro chain-link woven into the denim peeked out from the front pocket of another. The metal is woven in with the denim and then washed to achieve a vintage effect.

As part of Prada’s strategy to make denim a daily part of any woman’s wardrobe, the company introduced more outerwear for fall, including denim peacoats and shrunken denim jackets.

Rogan Opens Shop
Six years ago, Rogan Gregory made New York’s TriBeCa neighborhood the headquarters of his denim brand, Rogan. On March 10, it becomes home to the first Rogan store.

The 1,000-square-foot shop at 91 Franklin Street will house the Rogan clothing line, Rogan Objects furniture collection, and women’s and men’s suit line A Litl Betr, as well as collaborations with jewelry and innerwear designers, and stationery and art book dealers.

“There are a lot more furniture sellers down here and I wanted to make [the store] more of an object store,” Gregory said. “I’m more of a builder than a traditional clothing designer.”

“There will be individual vignettes throughout the store, but I’m trying to keep it as simple as possible,” he said.

The store will not house Edun, the socially conscious line he cofounded with Ali Hewson and her husband, Bono, nor will it carry Loomstate, the organic cotton collection Gregory co-founded in 2004.

“It’s a place where I can do whatever I want,” he said. “I can design something and have it in the store immediately, not six months later.”