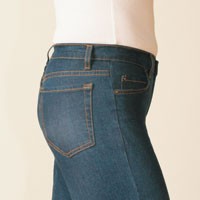 Jeans for Vanity’s Sake
There are many things women fake for the sake of vanity: Age and hair color are usually the easiest to pull off, while height and weight often require a little more help.

Not Your Daughter’s Jeans, a two-year-old company known for its misses’ fits, has added a new style that can make looking skinny more feasible.

The Tummy Tuck jean began shipping this spring and is selling briskly at stores such as Nordstrom, Dillard’s and the Place West in Cambria, Calif. Designed to flatten the tummy, the jeans, which use denim imported from China and Hong Kong, feature 4 percent Lycra spandex, compared with 2 percent in most brands, for a more forgiving fit. The flattering effect results from the inside cotton panel flanking the fly that pushes in the stomach.

“Our goal was to create a jean that didn’t show butt cleavage, but that also didn’t look dumb,” said Lisa Rudes-Sandel, president of NYDJ.

She co-owns the company with her sister, Leslie Rudes, who is vice president.

Molding the body is nothing new for a lot of apparel categories, such as swimwear, but most jeans designers focus on high-end looks for slim bodies. Even a number of misses’ denim brands, such as David Kahn and Beau Dawson, cater to the upscale customer.

NYDJ hopes to maintain a typical $100-and-under price point. Wholesale prices for the line range from $44 to $59, depending on embellishments such as turquoise beads, rhinestones and tuxedo stripes. The basic jeans style, offered in 8-inch and 9-inch rises, comes in light and dark washes as well as black and a softer, silicone-treated butter wash. For next spring, the company plans to introduce jeans in lighter colors.

The comfortable feel of the style and its ability to lift the derriere has won over customers at the Place West, where it hangs with French Dressing and Tribal.

“Everybody that tries it, buys it,” said store owner Cyndie LaBrie.

Strong sell-throughs are helping the company ship $350,000 worth of jeans a month, said Rudes-Sandel. She said the Tummy Tuck is accounting for 60 percent of the business, a number that surprised a veteran of the business. Her father, George, launched sportswear company Saint Germain about three decades ago. The sisters came aboard three years ago and now ship the line as private label. Their focus now is building the NYDJ label, but still keeping a youthful marketing approach.

Recently, they began referring to their company as an acronym.

Heatherette Gets Down With Denim
Heatherette designers Richie Rich and Traver Rains have dabbled in denim by including key pieces in runway shows or designing custom-made items for friends like Gwen Stefani and Foxy Brown. The pair never considered doing a full denim collection because they felt they wouldn’t be able to keep up with the demands of production.

“With clothing, the production is such a huge part of it,” Rich said. “We would spend up to 12 hours on one pair of jeans for the runway. Our customers would ask for it, but they don’t know the reality of what it takes to do one pair of jeans, then produce it for the masses.”

In order to launch their first complete denim collection, Rich and Rains went to Los Angeles, which Rich described as “the denim mecca of the world.” They sought out denim goods producer Freshtex, where brands such as Seven For All Mankind, James Cured by Seun and Paper Denim & Cloth are manufactured.

“Freshtex understands the process,” Rich said. “We go out there and … so the production team at Freshtex has a better understanding of what we want to do.”

The Heatherette denim collection will launch for fall-winter, with a separate collection for holiday that will include corduroy and velveteen pieces. The collections will include a total of 25 pieces. There are eight bodies, named after friends and muses of the duo: cigarette pants, denim shorts, a capri, pirate pants, a boot-cut number, a flared style, and two versions of a denim skirt. The bodies will come in six washes.

“I was so happy to find out that the word ‘Heatherette’ — all 11 letters — could fit on a rivet,” Rich said.

The collection will retail at specialty stores such as Henri Bendel, Kitson and select Nordstrom units. Rich admitted that his favorite piece from the collection was a pair of denim shorts, “especially for fall-winter.”

“I think it’s for the girl on the go,” he said. “She’s going to pair it with a sassy little jacket, thermals or tights, and heels. I like to say, ‘it’s what’s on the outside that counts.'”

Rich, who grew up in California, recognizes the necessity for denim in today’s market.

“In California, denim is such a huge part of the culture,” he said. “It’s like the ‘little black dress’ out there.”

Heatherette is using only Japanese denim for the line.

“It’s really so much better,” Rich said. “It’s like comparing a Volkswagen to a Mercedes. I often wondered what made one pair of jeans cost $250 and another $65, but it’s all about the better denim. You really can notice the difference.”

Since Heatherette exudes playfulness, Rich and Rains attached a tiny satchel inside each item in the denim collection that holds a charm and a fortune with sayings such as, “Don’t ask, don’t tell” or “Try it. You’ll like it.”

Entering the denim category is “scary and exciting,” Rich said. “People have really short attention spans. You always want to be the girl on the block that has it first and if girls in Japan have it and girls on Long Island have it, it’s not hip anymore. I think it’s important to keep your integrity and keep it real, and then people will get it.”
— Lauren DeCarlo

The Montreal-based company’s “Try the Fit, Help the Cause,” promotion will take place throughout October.

The new line for the promotion comprises two styles of jeans and a denim jacket, each made from a dark indigo stretch denim.

A pink ribbon studded in rhinestones will be present on each item — located on the back or front pocket of the low-rise, easy fit and natural fit jeans and on the front shoulder of the jacket.

The promotion is part of the company’s larger commitment to fighting breast cancer. Since 1996, the firm has donated 50 cents from the sale of each pair of jeans to a fund that has contributed more than $2 million to fund-raisers, hospital research programs and other endeavors.

“We realized our customer could be a target of this cruel disease,” Leonard Mille, chief executive officer, said in a statement. “We felt an obligation to assist the cause and raise awareness.”