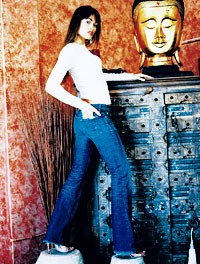 Veteran urban designer Karl Kani is trying it again with the ladies.

He’s launched a contemporary line called Live and thinks this one will stick, after past attempts at tapping the women’s market. As early as last year, he launched an urban junior line called Live by Karl Kani at the California Market Center’s Urban Suburban Show, but never shipped the collection.

“I wasn’t feeling it with the other lines,” he said. “The connection wasn’t there, since it was made overseas and I wasn’t touching it every step of the way.”

With a new focus on local production, Kani is operating the line as a separate entity from his $75 million signature brand that is designed at his 50,000-square-foot warehouse in the City of Industry, Calif.

Live’s headquarters are in a 2,500-square-foot loft in downtown Los Angeles. Faux-finished walls, custom-designed heavy wooden furniture, a warrior statue from South Africa and fur-dyed chair cushions decorate the exotic space where the line of hand-sanded, baked and resin-dipped jeans is created.

Live comes in one low-rise style with eight different washes, some with paint splatters, others with permanent leg creases achieved through stapling, and a few in darker indigos. Touches include goldplated buttons and rivets engraved with his feel-good sayings and back pockets featuring inverted Vs “to enhance the focal point of what to look at,” Kani explained.

T-shirts are also part of the mix, crafted from silicone-washed, ring-spun cotton, giving the garments a thin, papery feel with exotic graphics, such as Indian goddesses. Wholesale price points are $28 for the Ts and $77 for the jeans. For spring, Kani will expand the line to include miniskirts with front ruffles, capris with ribbed cuffs and trouser pants with front darts. A men’s line called Life will debut at Fashion Coterie in New York this month.

As the jeans pool becomes more similar, Kani said he plans to stick out with his washes. To ensure that, he’s bought a stake in his wash house and has his own chemist to oversee the process.

“If you believe in the product, your money should be behind it,” Kani said. “I thought this was the best way to make my own statement.”

This story first appeared in the September 9, 2004 issue of WWD. Subscribe Today.

Retailers have responded to the product. E Street Denim in Highland Park, Ill., Atrium in New York, Fred Segal Santa Monica in California and Nordstrom have picked up the line, which is expected to rack up first-year sales of $2 million.

“It’s fresh, and has a simple appeal with clean washes,” said Thomas George, owner of E Street Denim. “I’m a big believer in someone who can build one line into a successful business and create another. I want to give it a chance.” — Nola Sarkisian-Miller

The Denim Lounge has found a niche in the Chicago jeans market.

“We don’t carry department store lines, like Paper Denim & Cloth, Seven For All Mankind or Diesel,” said David Shelist, owner of The Denim Lounge in Chicago’s ritzy Gold Coast area. “We try to find up-and-coming denim lines and carry them before they hit the mainstream. If it gets too mainstream, it’s just not special enough for us anymore.”

The Denim Lounge, which opened in October 2003 in the basement of the hip children’s clothing store Madison and Friends, caters to an older demographic, both the junior shoppers who’ve outgrown the styles upstairs and their fashion-forward moms and dads. Shelist also owns Madison and Friends.

“A lot of our customers are physically fit moms who were asking us to do clothes for them,” said Shelist. “In our area, there was a need to have a hip denim store.”

Shelist carries eight to 12 denim labels, including True Religion, Rock and Republic and Hudson Jeans, at retail prices ranging from $92 to $242. Shelist said, “Tons of junior high school girls are graduating from Madison and Friends, and heading downstairs for Hudsons.”

There are always at least three denim specialists on hand, who encourage men and women shoppers to take 10 to 20 pairs of jeans at a time in the dressing room to help find their perfect fit.

“We encourage people to make messes,” Shelist said. “We’re offering a totally different philosophy. We don’t count how many jeans you take into the fitting room. We’ll throw jeans at you, and say, ‘Try this, try this.’” — Lauren DeCarlo

The life of a fit model is not necessarily filled with the glamorous parties and trips to exotic destinations associated with her sisters on catwalks and magazine covers. But it does provide the opportunity to learn a lot about fit.

A decade of work as a fit model — watching the rise of several major West Coast denim brands — convinced Paige Adams-Geller that she’d learned enough about what makes jeans work to design her own.

“I’ve always loved fashion, and I definitely had a voice and shared my opinions as a fit model,” Adams-Geller said. “It only made sense to try my hand at this.”

She’s launching a jeans brand, Paige Premium Denim, at the Fashion Coterie in New York at the end of this month.

The business venture is something of a personal mission for the 5-foot, 7-inch former Miss California, a size 6, who was also a print model and actress with guest roles in “Days of Our Lives” and “The Bold and the Beautiful.” She developed anorexia nervosa during her high school years and said the condition has proved to be a “lifelong battle.”

“That’s why I got into fit modeling,” she said. “I could actually have a real figure versus being pencil-thin.”

Targeting women in their late 20s, Paige Premium Denim uses Japanese and Italian denim for its 15 styles, which range from five-pocket jeans and skirts to five styles of trousers. The trouser cuts range from a younger look with a wide waistband, waist tabs and back-flap pockets, to a dressier cut in 8-oz. denim in a dark resin wash.

Wholesale prices for the line run from $65 to $110. The jeans are finished with a robotic laser process at the brand’s wash house, IGF.

“We use the machine, as well as human labor, to achieve subtle details so” the pants don’t look contrived, said Eric Wical, the line’s head of merchandising and product design who previously worked at Hard Tail, another Los Angeles denim brand.

Another feature of the line is its feminine details, such as fabric with a chrysanthemum design used for lining the pockets and the fly.

The brand’s parent company is Fortune Casuals, a private label manufacturer that recently expanded its offices by 50 percent in its move from downtown Los Angeles to a 38,000-square-foot brick and glass space in Culver City. Adams-Geller’s husband, Michael Geller, is a partner in that firm.

“We’re an entrepreneurial firm, but we have the safety net of a corporate structure,” said Adams-Geller, who predicted the line will do at least $1 million in first-year sales. “I’m feeling good about myself and hope to make other women feel the same way.” — N.S.M.

Saltzman, 56, has been in the apparel industry for more than 30 years. He has held executive positions with AG Jeans, Lucky Brand and B.U.M. Equipment. Most recently, Saltzman was chief operating officer of Joie Jeans.

Charles Lesser, chief financial officer of True Religion, said Saltzman’s responsibilities will include “everything to do with production, the warehouse and all the internal operations except design, finance and sales.”