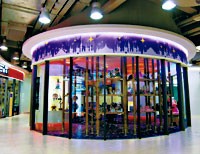 As Hong Kong-based sourcing giant Li & Fung nears the completion of its second licensing deal with Levi Strauss & Co., company executives said they plan to make brand management a much bigger part of their business in the coming years.

The company last year brought in $5.47 billion in revenue through its traditional business model — handling sourcing for major U.S. brands and retailers.

In January, the company signed its first licensing agreement with Levi’s for tops bearing the mass-market Levi Strauss Signature brand. In addition to making the product, which is Li & Fung’s classic approach, the deal called for the company to handle design, sales and marketing. That represented a major move up the food chain for the firm.

Now, the company is close to inking a licensing agreement for men’s and boys’ tops under Levi’s core Red Tab brand, a deal that Rick Darling, president of Li & Fung USA, said he expects to close “shortly.”

“We see it as a wonderful opportunity to strengthen the relationship with what we see as still being the world’s leading apparel brand,” he said in an interview this week at the company’s Manhattan showroom.

The extension, which follows Li & Fung’s licensing deal to produce Royal Velvet home textiles, marks part of a strategic shift for the company. Li & Fung group managing director William Fung has set the goal of earning more of “the other $3,” referring to the general rule that merchandise that sells for $1 on an f.o.b. basis, which covers manufacturing and duty costs,?brings in $4 at retail.

Prior to the licensing deals, Li & Fung did all its sales on an f.o.b. basis. With the licensed products, it puts itself in the position of a wholesaler — effectively raising the $1 to $2.

Darling said the company aims to make licensing a bigger part of its business, bringing in at least 15 percent of revenue by 2007. He added that talks were “well under way” for a deal with a children’s apparel brand, which he expected to be finalized within a few weeks.

“We are actively pursuing other brands within the apparel sector,” he said, adding that the company isn’t looking solely at licensing. “The other opportunities will be to pursue acquisitions as a long-term strategy.”

Darling said the company has five criteria it looks for in brands it considers licensing or acquiring: