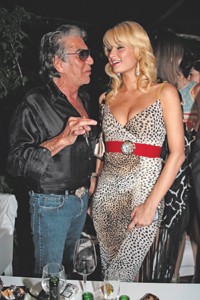 Loudermilk Jeans Takes Eco-Friendly Approach
Linda Loudermilk, the Los Angeles-based designer behind the namesake label that promotes bamboo, organic cotton and other eco-friendly fabrics, is spreading her message to the masses with a denim line launching next spring.

Under development for eight months, Loudermilk Jeans aims to offer a broader array than what is available from Loomstate, Edun and other denim brands that also advocate environmental sustainability by using organic materials. Loudermilk uses a corn-based fiber called Ingeo from Italy and sasawashi, a Japanese leaf that has antibacterial properties, in addition to bamboo and organic cotton blended with 1 percent spandex.

Treatments, too, were developed to be environmentally sustainable. The washhouse recycles its water; sandblasting is done by hand, and washing machines use ozone to oxidize jeans for a sun-baked look.

But Loudermilk Jeans doesn’t want to forsake style for sustainability.

“You have to make it salable first,” said Alejandra Kolyvakis, Loudermilk Jeans’ denim designer, who previously worked for David Cardona and designed private label collections for retailers Lisa Kline and Barneys New York. “You have to make it appealing.”

Loudermilk will begin selling the jeans at her store, which is to open in November in Los Angeles on Melrose Avenue, and will roll out to a maximum of 75 specialty shops next year. Pat Lawler, Loudermilk’s director of business development, said he expects first-year wholesale volume to reach $1.5 million, initially making up 25 percent of the entire business before eventually growing to account for 75 percent of sales.

“We really want to appeal to a wider audience,” Loudermilk said.

To achieve that, Kolyvakis created not only classic looks, including a boot-cut leg and a pant with a 9-inch rise, but also an edgy vibe that would appeal to women as old as 55 who buy the main — and more expensive — Loudermilk line and younger shoppers who track the latest in denim styles.
— Khanh T.L. Tran

IT Holding Unveils New Direction for Exté
IT Holding is mapping the turnaround of its Exté brand, abandoning reliance on big-name designers and focusing on the strength and know-how of its Ittierre manufacturing arm.

IT Holding chairman Tonino Perna began implementing changes for Exté this year when he appointed his daughter, Pamela Perna, chief executive officer of the brand. During last week’s Pitti Uomo, the men’s wear exhibition in Florence, Perna introduced her plans for a new direction.

“We wanted to enhance the part that was historically our bestseller and belonged to our tradition, all we are best known for,” Perna, 31, said during an interview at Pitti Uomo. “We wanted to reevaluate it and make it more recognizable, meeting a market request.”

Perna is counting on Ittierre’s strong track record to play a prominent role in energizing the brand. Ittierre has a tradition in trend-driven sportswear lines, contributing to the success of D&G, Just Cavalli and Versace Jeans Couture. This year, the company signed a licensing agreement with John Galliano to produce and distribute a second women’s line for the designer.

IT Holding, which also controls the Gianfranco Ferré and Malo brands, launched Exté in 1995. The label has received mixed reviews despite the appointment of high-profile designers such as Antonio Berardi, Sergio Ciucci and Alessandro De Benedetti. For its latest incarnation, management is taking a different approach.

“We are going back to our roots and a more technological research, after years of being a designer brand,” Perna said.

Exté will continue to be a total-look collection, including a full range of accessories. However, at Pitti Uomo the company highlighted its denim division as a major feature for spring-summer 2007.

Details of the new line include studs, embroidery, sequins and the use of gold thread in some styles. Front and back pocket details feature a stitched “X,” and washes will be dark and clean. Retail prices range from 90 to 300 euros, or $113 to $378.

The relaunch will also be accompanied by a new ad campaign shot by Mert Alas and Marcus Piggot. Perna declined to provide sales projections for the line.
— Luisa Zargani

Mudd’s ‘Real Girls’
Mudd is counting on a new advertising campaign featuring “real girls” to be a platform for energizing the brand’s customer base and driving traffic to its Web site.

The “Mudd Girls Move the World” campaign will appear in the August issues of Teen People and Seventeen that hit newsstands next week. The ads feature six teens from around the U.S. who were chosen based on a combination of their looks and desire to improve their communities and the world.

In addition to becoming the new faces of the Mudd brand, each girl received $5,000 to donate to a charity or cause. More than 2,000 applicants wrote essays about how they were representative of a modern and progressive teen girl and how they intended to have an impact on issues such as hunger, poverty and environmental protection.

“These are really our customers and these are girls that are doing remarkable things,” said Dari Marder, creative director at Iconix Brand Group, which acquired Mudd in April days before the campaign finalists were to be photographed. “The campaign is the platform to tell the world that you, too, can do this. It’s sort of a call to action. It’s really about giving back.”

The campaign, conceptualized and carried out by the Catherine Sadler Group, cost upward of $1 million. It required casting calls in four cities, including New York, San Francisco, Houston and Atlanta. One winner is Jerell, a 15-year-old from New Orleans who was forced to move to Atlanta with her mother after Hurricane Katrina destroyed their home.

Although most of the girls donated their award to charities, Alandrea, a 17-year-old dancer from Occidental, Calif., used the money to organize a dance show benefit at her school. The proceeds will go to the Polaris Project, an international organization that fights human trafficking and slavery. The level of involvement in causes or charities varies. For instance, one 16-year-old winner, Jessica, intends to have a positive impact by becoming an actress. The girls are only being identified by their first names.

Iconix hopes the campaign’s Internet component will provide greater insight into the Mudd customer and ultimately create another environment in which to spur sales. The Mudd Web site will expand to include

mymuddworld.com, a “microsite” aimed at creating an interactive community of socially active girls, Marder said. The site will feature the six teens from the campaign and provide biographies, links to their charities and their essays.

“We think there will be interest in these Mudd girls,” Marder said. “We’re even thinking of sending them out on their own little road show.”

The site will offer behind-the-scenes pictures and video of the girls’ photo shoots, and may include travelogues and blogs from them over the summer. Those visiting the site will also find resources about how they can get involved with a number of social issues, as well.

“I think the Web site will become a community site for these girls and that will help drive future campaigns,” Marder said.

Naturally, the company won’t shy away from infusing this community with Mudd product.

Iconix plans to continue developing the concept for the campaign, which the company inherited when it acquired Mudd this year. The effort differs from the traditionally celebrity-driven campaigns of the company’s other brands, Candies and Bongo jeans.

“I think we see a long life for this campaign and we haven’t even fully developed it, yet,” said Marder, adding that a holiday initiative with a new group of girls as well as holiday products is being discussed.
— Ross Tucker