Marilyn Inspires Dondup Denim
When Italian denim manufacturer Dondup presented the prototype of its customized, diamond-studded jeans, there was no doubt on the name — Marilyn Monroe. 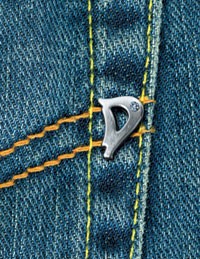 Marilyn Inspires Dondup Denim
When Italian denim manufacturer Dondup presented the prototype of its customized, diamond-studded jeans, there was no doubt on the name — Marilyn Monroe.

Dondup’s signature sterling silver D logo on the back pocket comes in white gold and is embossed with a small diamond. Each customer will choose the fit and the wash, and every pair will be numbered, bear the customer’s name and be shipped to her home.

The idea is to coddle denim aficionados with a unique and precious garment that also allows them to test their creative whim. “The concept is to create, interpret and personalize a fashion garment that should express someone’s personality,” said Massimo Berloni, chief executive officer. His wife, Manuela Mariotti, supervises the design team.

A coffee-table book on the history of denim comes with the jeans, which retail for $1,400. Only 80 stores worldwide were selected to offer these jeans to their customers.

Diamonds aside, Berloni said these jeans are unusual because rather than having predefined washes, cuts and styles like the ones featured in Dondup’s main collections, they celebrate the manufacturing techniques of 50 years ago.

“This time around, we bypassed modern techniques and chemical additives to focus on pure organic cotton that is woven by hand on small looms and dyed with natural indigo,” Berloni noted.

Once the original wash fades, the jeans are shipped back to company headquarters in Fossombrone, in central Italy, where they will be fine-tuned back to their original glory.

Founded in 1999, the brand gets its name from a Tibetan llama, Mingyar Dondup, who professed, “All men are equal and race, color and religion mean nothing. All that counts is the intentions and action of each of us.” In 2004, Dondup generated wholesale volume of $24.6 million.

All Dondup’s production is done in Italy and the collections are carried in 470 stores worldwide. Since it crossed the ocean to the U.S., Dondup has made significant inroads and is carried by stores such as Fred Segal, Lulu Boutique in Miami and Riccardi in Boston.
— Alessandra Ilari

Brand Battle Brewing: True Religion Closes In
It’s no secret that Seven For All Mankind is the usual number-one seller at stores when it comes to premium denim. But what follows? A recent channel check at more than 130 better department and specialty stores, including Nordstrom, Bloomingdale’s and Saks Fifth Avenue, conducted by Wedbush Morgan Securities analysts Vera Van Ert and Carrie Vilaplana, found that True Religion is the second hottest-selling brand and has even nudged aside Seven at certain locales. Nordstrom represents the strongest department store channel for True Religion, where it’s the top seller, but the denim label’s standing slid at Neiman Marcus, where it fell from second to third place. Trailing True Religion was Citizens of Humanity, Rock & Republic and Joe’s Jeans. Wedbush does business and seeks to do business with companies represented in its reports.
— N.S.M.

Chalc Outlines Its Aesthetic
Chalc denim is redefining the concept of “Modern Americana.”

Chalc’s designer, Michael Abbey, has created a collection of American denim and modern sportswear for everyday wear that works with today’s fashion-savvy consumer.

The Chalc (pronounced chalk) collection, which launches for fall, includes four fits for women: a boot cut; a lean, straight-leg style; a flare, and a wide flare. The washes range from “rinsewear,” a dark indigo, to “lightwear,” a lighter blue wash. “We’re not doing crazy rips and tears, so it’s not overdone,” Abbey said. “We’re going for a cleaner look.”

Chalc includes nondenim pieces, too, such as graphic T-shirts, blazers, silk blouses and cashmere sweaters. Denim wholesales from $70 to $100, and nondenim pieces wholesale between $75 and $250. The company predicts its wholesale volume will reach $2 million in its first year. Chalc will retail at stores such as Bloomingdale’s, E Street Denim in Chicago and TG170 in New York.

The denim is produced in North Carolina and the fabric is cut, sewn and washed exclusively for Chalc in El Paso, Tex. The design team is based in Los Angeles.

Abbey was an intern at Levi Strauss & Co. while attending San Francisco State University and was hired immediately after graduation. At Levi’s, he helped develop subbrands and was tapped to design for the Asian design center in Tokyo. After Levi’s, Abbey oversaw denim, knits and wovens at Earl Jean and went on to consult for brands such as Joie and Three Dots.

Chalc is the brainchild of Brooke Summerson, Chalc’s president, whose family launched the Paris Blues denim brand more than 20 years ago.

So where did the name come from?

“All good tailors use chalk,” Abbey said. “Our denim is a little more tailored than others. It’s a brand you’ll want to wear for years.”
— Lauren DeCarlo

Celebs Do It Their Way
Julianne Moore, Gwyneth Paltrow, Kirsten Dunst and Selma Blair are the latest celebrities to lend a design hand to a clothing line — sort of.

These Hollywood stars have added their personal touches to Generra jeans that are intended for a silent auction at Generra’s launch party Tuesday to benefit Inner-City Arts, a nonprofit organization that uses art to empower the lives of inner-city children.

New York-based Generra chose Los Angeles as the host party site based on its glamour quotient.

“It’s not just that beautiful, happy people are walking around in my jeans in L.A., but that the Hollywood thing is also going on and generating sales,” said Tony Melillo, Generra’s creative director.

He also enlisted the design help of Adrien Brody, Damien Rice, Ryan Seacrest and Justin Chatwin. Melillo said the celebs received a pair of jeans and a design kit, featuring sandpaper, lace and leather trims, sewing kits and thick threads to add their finishing touches. With the help of her two children, Moore contributed a pair painted with “peace” and “love” on the legs. She said she wanted to help because of her appreciation for Melillo.

“I’m a big fan of Generra,” said Moore, via e-mail. “Tony Melillo’s clothes are things that I wear every day.”

The addition of denim follows Generra’s heralded clothing launch in 2003, featuring wearable items from T-shirts to zip-front sweaters to windbreakers and little shorts. Public Clothing acquired Generra in 2002 from Generra Holding Co., a licensing operation started after Generra’s bankruptcy in 1994.

Planet Blue, in Malibu and Santa Monica, is among the 300 retailers, including Scoop in New York and Barneys New York, that carries Generra and said the denim, facing stiff competition from the likes of Seven For All Mankind and True Religion, is catching on with customers.

“They have a big fan base for their clothing line who are giving the denim a chance,” said Jen Rossi, buyer for Planet Blue.

“With Generra, we do things slow,” he said, smiling. “We don’t rush into things.”
— Nola Sarkisian-Miller