Denim Dish: Notify Gets Casual With Nfy … A Capital on Premium … Levi’s Heads for the Stars 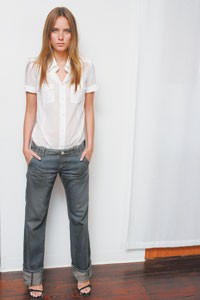 Notify Gets Casual With Nfy
Maurice Ohayon, creator of Notify, the Paris-based premium denim line, is showing his more casual side this spring with Nfy, a less-dressy, lower-priced denim collection.

“The first difference, for me, is the cut of the jean,” Ohayon said in a phone interview from Paris through a translator. “We were looking for a different attitude. It’s slightly cooler, more relaxed and a bit more casual.”

Since its launch in spring 2004, Notify has featured sleek, tailored styles that shied away from distressed washes and embellishments. Nfy, on the other hand, will focus on intricate handiwork, looser fits, embellishments and advanced wash treatments.

“I’m able to play around a little bit more,” Ohayon said. “The guidelines are not so fixed.”

The collection consists of five bodies that are slouchier than Notify styles, with some featuring large pleated cuffs at the ankle. Washes range from a dirty blue to a blue green.

“The bodies are a bit more broken,” Ohayon said.

“We were more aggressive in the treatment of these pants,” said Christophe Desmaison, owner of CD Network, a showroom based at 4 West 22nd Street in Manhattan that handles the North American sales for Notify and Nfy.

Nfy will be manufactured in Italy by Romano SpA, owners and manufacturers of the premium denim brand Meltin’ Pot.

“They have a whole system set up and we’re really using their strength,” Desmaison said.

The bulk of the Nfy collection has a wholesale price range of between $79 and $89, which is about 20 percent lower than Notify. A few styles, such as one with myriad embroidered skulls on the back pocket, could wholesale for as much as $119.

The collection will hit department stores and speciality boutiques in the U.S., France, Italy and Japan by mid-January. Ohayon predicts the wholesale volume of Nfy will reach $5 million in the U.S. next year.
— Lauren DeCarlo

A Capital on Premium
As the premium market evolves, Levi’s, the granddaddy of the denim world, has decided to create a new home for its premium collection and increase the focus on the line called Levi’s Capital E, launching for spring.

“Basically, we went back and looked at Levi’s through the decades and looked at the special and unique qualities like the stitchings and imperfections,” said Carl Chiara, design director of Capital E. “The beauty of it is that everything was one-of-a-kind. Jeans weren’t mass produced in the Thirties, Forties and Fifties and we wanted to capture that.”

One way to capture that aesthetic was to have the jeans hand-stitched. It takes 15 workers to create one pair of jeans in the Levi’s Capital E collection, and each pair takes one full day to make. The wash techniques add another 24 to 48 hours.

Levi’s has an existing premium collection called Levi’s Premium, which will be phased out in the spring. The Capital E collection will replace it.

There are about 10 styles in the Capital E collection, including the Ruler, a low, long, lean straight cut; the Offender, a one-button ultra low-rise style; the Ambler, a relaxed boot cut, and the classic 501 Original Jean, the basic five-pocket, button-fly style. Washes range from a clean, dark blue wash to a vintage-inspired, slightly worn-in wash. Denim shorts, vests and miniskirts are also part of the collection.

The collection will hit specialty stores like Barneys New York and Neiman Marcus in January. The wholesale price range is between $70 and $150, with most styles hovering around $200.

Jeans in Levi’s Capital E collection are constructed from fabrics from the U.S., Turkey and Japan and are sewn in North Carolina and Texas. Buttons feature turquoise, and the tiny red label on the back pocket simply illustrates a capital block-letter “E.”
— L.D.

Levi’s Heads for the Stars
Levi’s Atelier is the latest example of stylish solicitude. The showroom, which the jeans manufacturer opened last month on Melrose Avenue in Los Angeles, is its first geared to stars and VIPs.

The purpose of the Atelier, according to the company, is to offer flawless service and products to celebrity and VIP clients. It also will serve stylists.

Sheri Timmons, who oversees entertainment and presence marketing for Levi’s, said, “We had so many requests and we were servicing them from our L.A. store on Beverly Drive. It became overwhelming.”

“We have about 10 or 15 stylists a day pulling from our stock,” Timmons said. “We’ve increased by 20 to 30 percent the amount of people we’re able to service.”

Melissa Etheridge brought her favorite pair of Levi’s jeans, which were worn and no longer fit, to the Atelier, which repaired and refit them, Timmons said, adding: “For Vince Vaughn, we try to get the longest lengths we make. Johnny Depp wears the Skinner Jean. We had to track it down for him.”

The company also customizes jeans with embroidery and crystals.

For fall, Timmons sees jeans moving in two directions: away from boot cut toward very dark stiletto-leg jeans and, at the other extreme, ragged, holey jeans with lots of patches.

Timmons stressed the Atelier’s job is not to raise revenue, but rather to raise Levi’s profile.

“We’re doing this as a service based on demand,” she said. “We’ll judge its success by the traffic it brings, the number of calls and the demand of people asking for products.”
— Sharon Edelson