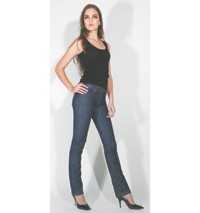 Odyn Goes Custom for Fall
Premium denim brand Odyn bills itself as “denim with a story.” For fall, Odyn is counting on customers to help create their own stories.

The New York-based line, founded in 2004 and named for the Nordic god of poetry, is inviting clients to its showroom to outfit themselves in bespoke denim.

“It’s such a cluttered denim market, so we just wanted to offer something extra to give ourselves more of an edge,” said Noelle Collet, director of sales, of the brand’s new Made to Measure service.

Customers seeking a one-of-a-kind look will get a private consultation with Odyn designer Emmy Lauridsen, where they will have basic measurements taken, discuss design ideas and work with technical designers to determine which jeans offer the ideal fit. There is a choice of three basic fits: the Swan, a skinny-fit style; the Thumbelina, a low-rise, slim-fit boot-cut silhouette and the Matchgirl, a higher-rise classic boot-cut.

The jeans will be available in four washes. From there, customers can pick from an array of pocket designs and even the thread color for stitching. They also will be encouraged to choose their own detail elements, such as initials or symbols.

The consultation is to take 30 minutes on average, Collet said. The jeans will take about four weeks to manufacture. Of course, custom-made clothes don’t come cheap. Odyn’s denim will retail from $310 to $450, about twice the cost of an off-the-rack pair.

“It gives us a closer relationship to the customer to find out what they really want and what they’re really looking for,” said Collet, adding that it is particularly helpful to the designer. “A lot of the time, [the designer] gets so far removed from the customer and the retailer. So to hear the feedback can only help her going forward.”

Lauridsen will take the custom design show on the road starting in August to stores such as Fred Segal, Atrium and Selfridges. The brand will work with retailers to notify customers of the date Lauridsen will be in the store, bringing a complete size run of each fit, and a selection of design and detail elements.

Although the custom-made service is only scheduled for the fall season, Collet said it would continue if successful.
— Ross Tucker

David Lauren, senior vice president of advertising, marketing and corporate communications for Polo Ralph Lauren, and volunteers from the company will spend today in the South Bronx assisting in the installation of insulation manufactured from recycled denim into a 19th-century building.

The event is part of a partnership between the Polo Ralph Lauren Foundation and Habitat for Humanity to refurbish a five-story building at 703 East 156th Street that will have eight affordable residential units.

The foundation said last week that it would donate a denim-based insulation for the project as part of the company’s “Give Your Old Jeans a New Home” campaign that kicked off in September. Celebrities and musicians, including Lindsay Lohan, Gwen Stefani and Tobey Maguire, and college and high school students collected 20,000 pairs of jeans, which were shredded and cleaned and then converted into 80,000 square feet of environmentally friendly insulation by Bonded Logic, Chandler, Ariz.

According to a statement from the Polo Foundation, the insulation, dubbed UltraTouch denim insulation, is free of carcinogens and formaldehyde, and performs better than traditional insulation.

“This effort is consistent with the company’s commitment to volunteerism and to contributing in a meaningful way to underserved communities,” said Lauren in a statement.

UltraTouch denim insulation will be used to insulate the entire Bronx building. Polo has also sent 60,000 square feet to Habitat for Humanity International in Canton, Miss., to be used in rebuilding hurricane-damaged homes and buildings. The company is a partnered with Volunteer Mobile in Alabama to build homes for two families that lost theirs in the hurricanes.
— R.T.

Replay Creates Foundation
Crazy, energetic and passionate, but above all a dreamer. These words were used to describe Replay founder Claudio Buziol during a conference in late May to announce the formation of a foundation in his memory.

Along with Buziol’s family, the Italian jeanswear brand announced the creation of the foundation at the company’s Northern Italian headquarters in Asolo through a series of talks by Italian writers, professors and journalists to university students. Their subject: the importance of dreams. The gathering was held on what would have been Buziol’s 49th birthday. He died of a heart attack in January 2005.

Replay president Attilio Biancardi said the Claudio Buziol Foundation would operate with the aim of helping youths to realize their hopes.

“There will be an internship program with top graduates from the fashion management course at Milan University of Bocconi, and we are looking into other ways the foundation can benefit youth both in Italy and possibly on an international level,” Biancardi said.

Also present were Buziol’s children: Silvia, 22, and Gianpaolo, 14. After the conference, Silvia Buziol said her father would have been happy to see the foundation come into being.

“He would have loved it, he was always dreaming,” she said. “Even when you were talking to him about everyday things, you could tell he was thinking about something else. His head was always in the clouds.”
— Stephanie Epiro

Seven Awarded $3.3 Million
Seven For All Mankind has been awarded a $3.3 million default judgment in U.S. District Court in a trademark infringement lawsuit.

The company filed the federal lawsuit in Manhattan in October against Steven S. Drummer, a broker who does business as Colter Bay Fashions in New York and across the U.S., and two other defendants. Seven For All Mankind alleged that the defendants engaged in trademark infringement, trademark counterfeiting, copyright infringement, unfair competition and false and deceptive business practices. The defendants allegedly sold denim jeans and other apparel bearing Seven For All Mankind’s trademark, design marks and copyrights to stores in New York and across the country.

Judge Alvin Hellerstein granted the request for a default judgment on May 19 after Drummer failed to answer the complaint, according to court documents. Drummer declined to comment.

Hellerstein granted Seven For All Mankind damages and permanently stopped Drummer from imitating, copying or making unauthorized use of Seven’s trademarks. The monetary award included damages for trademark counterfeiting and copyright infringement in addition to attorney’s fees.

“Seven For All Mankind takes counterfeiting seriously and defendants who think by not showing up in court the problem will go away have got it wrong,” said Barbara Kolsun, senior vice president and general counsel for the denim company.

The remainder of the lawsuit, against Top Gun Footwear and Richard Franco, who conduct business in New York, is pending.
— Liza Casabona