Parasuco is set for a homecoming of sorts. 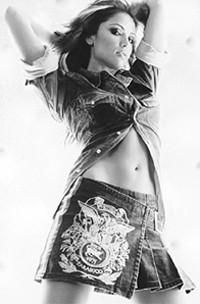 The Italian-born jeans designer Salvatore Parasuco is getting ready for a homecoming of sorts.

His Montreal-based denim brand, Parasuco, is preparing to launch two new lines for the European market this spring. They are I Parasuco, a high-end ready-to-wear line, and Parasuco Cult, a lower-priced denim-heavy collection.

The designer said he expects the revenues from the European expansion to quickly exceed his current $100-million volume in North America.

“The first time I saw my product for sale in Italy, I saw my jeans in the window of a store for $800,” he said. “I was shocked. Those same pair of jeans were selling in the U.S. for $120. But the truth was, my brand was seen as a designer brand from the U.S. and those jeans could easily sell for that much money there.”

This major entrance into the European market is something Parasuco had long hoped would happen. As an immigrant growing up in Canada, he said he thought he would never see his own brand become a success in the country of his birth.

“In order for me to make it big in Italy, I had to be successful in America first,” he said. “Then I would be accepted there.”

His quest to become a successful jeans designer in North America began in 1968. At the age of 14, Parasuco made extra money selling jeans out of his high school locker that he had made at home. His peers paid $6 per pair. While he did this to “become popular among the girls and earn some extra cash,” he was still about seven years away from his biggest break.

In 1975, he started Santana brand denim with two partners. He was the silent partner. The brand became well known throughout Canada for its black denim, and eventually, stretch denim.

“Denim manufacturers thought I was crazy when I wanted to put Lycra [spandex] in the denim,” he said. “I knew the Lycra would be great for women’s jeans because they could appear tight, but still be comfortable.”

Innovation was what kept the Santana jeans brand alive in Canada — stretch denim in 1976, stonewashed jeans in 1980 and sandblasted jeans in 1986. It was at this point Parasuco wanted to sell the brand in the U.S., but hit a dead end when he found the Santana name was already copyrighted there.

“People working with me kept saying I should just use my family name,” he explained. “So I did and learned a major lesson from this. I copyrighted the Parasuco name in every country I could. I knew that if I could make it in the U.S., then I could make it anywhere. It was New York that would be the biggest challenge.”

In 1987, Parasuco bought out his partners in the Santana business and decided that he wanted to launch the Parasuco brand in the U.S. He took a 10-by-10 foot booth at a New York trade show and introduced the eponymous brand he runs today. But because the Santana name was doing well in Canada, he allowed that brand to continue operating.

“I couldn’t believe how busy we were,” he said. “We were swamped and we ended up booking $1 million in business just at that trade show. I thought I was on top of the world. But I learned another lesson from that show. Sure, we booked $1 million, but out of that million, only $100,000 came in.”

While he worked to build the Parasuco brand in the U.S., the Santana brand was picking up steam in Canada. Parasuco said he learned the importance of marketing in 1991 when he attached a condom to the hangtags of Santana jeans to raise money and awareness for AIDS research.

“As a small company I didn’t have the money to spend on advertising,” he said. “But this was the best marketing I ever did without realizing it. I received so much press on this.”

That convinced him of the value of investing in advertising. He began phasing out the Santana name in Canada to focus on one brand worldwide and filmed a TV commercial. By 1995 he dropped the Santana name.

It was from then on that the brand took off, he said. He gained customers in the U.S. and Canada and then in Italy, his debut into Europe.

Parasuco’s I Parasuco is a high-end nondenim collection with a starting retail price of $150 for a T-shirt and up to $6,000 for a coat. Parasuco Cult is the more affordable denim collection, with jeans retailing for about $200.

Parasuco said he will also launch a fragrance in fall 2004, but is still working on the scent, bottle design and name.