Smashbox Studios becomes a jeans "Factor" ... Peace for People turns to embroidery for something special ... Raven stays tailored and sexy. 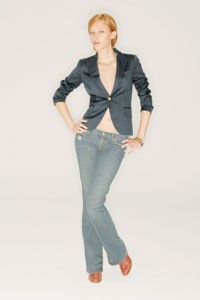 Peace Through Embroidery
People For Peace, a Los Angeles-based denim collection that launched in February, is taking the embroidered denim trend to the max.

“Of course, we follow the trends,” said Charlie Amzallag, founder and designer of People For Peace, referring to the current demand for colorful, embroidered denim styles. “But this is something different.”

The People For Peace collection consists mostly of hand-embroidered jeans, with a bit of patchwork rounding out the mix. There are some 30 to 40 styles in the collection, ranging from five-pocket boot cuts to sleeker, straight-leg styles. Each pair is made from Japanese or Italian denim and is washed with purified water.

“It’s the treatments that make us a little different,” Amzallag said.

The line wholesales from $129 to $169. People For Peace is sold in more than 300 specialty boutiques and department stores worldwide. In the U.S., the collection is available at Intermix and Atrium in New York; Fred Segal, 818 Freight and M. Frederic in Los Angeles; Lulu and Foley in Miami, and E Street Denim in Chicago.

“They’re doing the novelty thing with embroidery,” said Thomas George, owner of E Street Denim. “Everyone’s got good washes right now, but the consumer is reacting to their unique embellishment.”

People For Peace also is sold in Italy, France, Spain, the U.K. and Japan. Amzallag said he predicts the company’s wholesale volume will reach $6 million to $8 million worldwide in its first year.

As for the name, Amzallag said: “We’re sending a message out that peace in the world is a good thing. People seem to like it.”
— Lauren DeCarlo

Cygne Designs in Deal With Commerce Clothing
Women’s apparel manufacturer Cygne Designs Inc. is getting into denim. The New York-based company said last week it had signed a letter of intent to acquire the denim clothing supply business of Commerce Clothing Co., a privately held company owned by Hubert Guez.

As part of the purchase agreement, Cygne will give Commerce Clothing 12 million of its common shares and has agreed to an eight-year, $47.5 million promissory note.

This story first appeared in the June 2, 2005 issue of WWD. Subscribe Today.

Commerce had net sales of about $13.4 million in the first quarter of 2005, according to a statement from the company.

The Smashbox Factor
Smashbox Studios has added another focus to its growing roster of business segments.

The Culver City, Calif.-based photography studio begun by brothers Dean and Davis Factor, the great-grandsons of makeup marvel Max Factor, has launched a clothing line under license to Los Angeles-based designer David Park. Denim and tops are the initial pieces for Smashbox SLS, which will later expand into knits and handbags.

“There’s a glut of denim on the market, we know, but that doesn’t say people aren’t buying denim,” said Dean Factor, chief executive officer of Smashbox. “It’s the lifestyle. I wear jeans every day. They happen to be Levi’s, but they’re the lifestyle Davis and I follow.”

Since Smashbox opened in 1991, it has attracted high-profile photographers such as Annie Leibovitz, Patrick Demarchelier and Herb Ritts. Five years later, they introduced the Smashbox Cosmetics line, which is carried in better stores such as Bloomingdale’s, Marshall Field and Sephora and generates $75 million in retail sales.

Last year, they cemented their fashion presence when they partnered with IMG/7th on Sixth to play host to Mercedes-Benz Fashion Week twice a year at their studios. Dean Factor, who said he’s been “dying to create a clothing line,” also is plugged into the industry through his director’s seat on the board of Innovo Group, makers of Joe’s Jeans.

The opportunity to work with the Factors provided motivation for Park, who has designed clothing for juniors’ and contemporary customers since the Nineties. Park participated in fashion week in 2003 at Smashbox prior to the venue’s partnership with IMG and later presented a clothing idea to the brothers. Logistics prevented the development of the line at the time, except for black, form-fitting T-shirts that sold out on the QVC home shopping network.

“I liked the feel of Smashbox, its vibe and how we all really got along,” Park said.

The new line of Italian stretch denim jeans consists of five styles — a slim-fitting trouser, a straight-leg, a boot cut, a gaucho look and jeans with flap pockets. Gold zippers and buttons engraved with Smashbox SLS and washes favoring a raw, darker look are distinguishing details, but otherwise, the aim is to keep it simple. Wholesale prices range from about $75 to $150.

“Everybody seems to be caught in the struggle of who can put more things on the jeans, so we went for a more basic but glamorous feel,” he said.

The line, which also features T-shirts made of supima cotton and Modal in subdued tones of cabernet, smoke and harvest gold, kicked off quietly at Intermezzo in New York last month. The collection picked up orders from about eight boutiques, including the Lounge and Cantaloup in New York. Next week, it will bow during the Los Angeles market and it will ship in July. First-year sales are expected to hit $1 million, said Dean Factor.

“It’s the best basic we’ve seen,” said Heleyne Tamir, owner and buyer for Cantaloup. “It’s very sleek, and being from Smashbox, it has that studio-esque … cool factor.”
— Nola Sarkisian-Miller

Raven: Tailored to Be Sexy
When Raven Tailored launched in 2004, Erez Zarur, co-founder and designer, set out to create a contemporary pants collection that combined two styles he felt women craved: tailored and sexy.

Now, Zarur, along with his brother, Eyal, is applying that philosophy to Raven Denim, which will take tailored, yet sexy, bodies and give them a slightly vintage aesthetic. A capsule collection will launch for summer, with a full rollout planned in the fall.

The pants in the collection feature an unhemmed inseam of 35 inches, 2.5 inches longer than the industry average.

“There are a lot of people doing vintage denim styles, but they aren’t sexy,” said Erez Zarur. “I wanted to create jeans that were both sexy and vintage — to combine tailored looks and vintage styles.”

Raven Denim will consist of three styles that will wholesale for $79 to $98. Styles include the classic five-pocket with a 19-inch leg, a five-pocket with a slimmer 15-inch leg and a trouser style that is a take on the Raven Tailored Hipster, one of Raven Tailored’s bestsellers. Raven Denim will launch with 12 washes that range from a deep indigo to a rugged, distressed look. The Zarur brothers said the number of washes for the next delivery will depend on customer feedback.

The company expects the denim collection to reach a wholesale volume of $3 million in its first year. Raven Tailored, which wholesales in the range of $89 to $98, is in stores such as Big Drop, Atrium and Bergdorf Goodman in New York, and in Bloomingdale’s, Barneys New York and Saks Fifth Avenue units. The denim collection will target specialty boutiques for distribution.

Raven is backed financially by Milk Studios, a cultural center supporting creativity in fine arts, music and design that occupies 45,000 square feet in the New Media Arts Center in Manhattan’s Chelsea neighborhood. Milk offers equipment rental for location shoots, full production and casting, as well as gallery space and seven full-service photographic studios. This is the first time Milk has ever gotten behind a fashion company.

“We were impressed by Raven’s focus,” said Mazdack Rassi, managing director of Milk Studios. “Milk was always assessing new creative businesses to support and we weren’t looking for a fashion company, but we felt we could give them a shortcut to knowing what future styles would be. Our goal is to not just do bottoms. We want to do a full line and dress a girl up.”
— L.D.