Canadian shoppers over age 35 are jumping into denim faster than anyone else and retailers are opening divisions targeting that demographic. 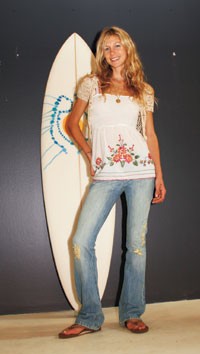 Roxy Rides the Wave
Roxy is expanding beyond its traditional beachside fare of board shorts, bohemian tunics and handkerchief dresses and getting serious about denim.

The junior surf line, owned by Huntington Beach, Calif.-based Quiksilver, is enhancing its limited denim offering to include a dozen styles in six washes for next spring.

“We really haven’t gone after the business,” said Dana Dartez, Roxy’s vice president of design. “What we’ve had was successful, but it’s super-important for Roxy to be a bigger part of this.”

Already a key driver in the contemporary sales channel, better-priced denim for juniors is emerging as a growing business among active-inspired lines such as Volcom, Hurley and Matix. Roxy has carried some denim, but its focus over the past two years has been tweaking its line to appeal to an older consumer. Roxy accounts for 33 percent of Quiksilver’s business and was a primary driver in the company’s rise in women’s sales last year, which increased 32 percent to $295.6 million.

“They haven’t been a big player in the past and they’ve been missing it,” said Carol Nielsen, women’s buyer for Becker Surf, a Torrance, Calif.-based chain of five stores.

To demonstrate its commitment to the category, Roxy hired Lisa Arenstein from Abercrombie & Fitch as its denim designer.

Jeans with heavy yarn embroidery, patched pants with twisted seams, trousers with back flap pockets and a jacket with patchwork quilting on the back are highlights of the line.

When it came to the fits, Roxy chose names that honor the company’s heritage. Sunset Beach is home to its professional surf contest in Hawaii; Cloudbreak is named for the Cloudbreak reef in Fiji, the site of another Roxy surf competition, and San Onofre is a California beach and the setting for company retreats and surf camps. Each hangtag will be tied to those iconic locations.

Dartez said the goal of the line was to connect with surf culture as a marketing tool.

“The whole West Coast aspirational vibe is about who we are,” she said.

Wholesale prices start at $19, and retail is from $39.50 to $64. Major chains will preview the line next month. Nordstrom, Macy’s, Zumiez and PacSun are the types of retailers Dartez hopes will pick up the line, which is expected to ship in September for a few fall deliveries and in November for the bigger spring push. She said the quality of the line was better than in the past, although it’s $10 to $20 cheaper as a result of better deals with factories.

“It looked expensive, but it was at Roxy prices, and you can’t beat that,” said Becker Surf’s Nielsen, who will test the line in August.
— Nola Sarkisian-Miller

Stores Target Over-35 Crowd in Canada
Stores cultivating jean sales in Canada should look beyond the traditional teen market.

Canadian shoppers over 35 years old are jumping into denim faster than anyone, and women over 55 are leading the way. Retailers are beginning to take note by opening new divisions targeting that demographic.

Men and women over 35 bought more than half of all jeans in Canada last year, according to research from the Toronto-based NPD Group Canada. The biggest gain, by about 20 percent, came from women over 55.

Comparatively, in the U.S., jean sales to women over 55 in the last 12 months were down 4.3 percent, although they were up 15 percent in the 35-to-54 age group, according to the NPD Group of Port Washington, N.Y.

“The women’s denim market [in Canada] is an estimated $463.7 million annual business, 52 percent of which is driven by women over 35,” said Kaileen Millard, director of fashion at NPD Canada. All figures have been converted from Canadian dollars at the current exchange rate.

“The biggest growth has been sales of denim to women over 55,” Millard said. “This market has doubled in the last five years, with stretch denim cuts being the most popular styles.”

Millard is not surprised by the results of the research, noting that women 55 and over have more disposable income, with their children no longer living at home.

“They’re also fashion-conscious and want something comfortable to wear,” said Millard. “Retailers are also changing their assortments in terms of sizing, but I don’t know if it’s age-related. It could be related to Canada’s growing ethnic diversity.”

“The popularity of less expensive private brands found in specialty stores reflects a growing trend among women to spread their clothing budgets further,” Millard said. “A consumer who spends money on one pair of premium jeans could use the same dollars to buy a selection of private label brands with a handful of matching accessories.”

The most popular brand among both men and women remains Levi Strauss, which has 16 percent of the men’s market and 2.5 percent of the significantly more fragmented women’s denim category.

When segmented by age, 45- to 54-year-olds represent the biggest spenders at 28 percent of the population, followed by the 35- to 44-year-olds at 23 percent. Canadians under 25, often perceived as the major target of today’s advertising and marketing dollars, are the least active shoppers at only 7 percent.

The amount of money women between 40 and 55 have forked over for apparel in the past few years has grown about 15 percent annually and that pace is expected to continue for the next five to 10 years, suggests other research from Liz Claiborne Canada.

To capture the older female shopper, Liz Claiborne Canada plans to launch a new chain in September called Yzza, targeting the 35-plus female who wants stylish clothing at reasonable prices. Three stores will be opened in Ontario and one in British Columbia, all in power centers.

The private label apparel will be sold under the Yzza name with an average price point of $39, compared with the usual $52 at Liz Claiborne, according to Yzza’s marketing manager, Anne Marie Caron.

“We’re targeting the budget-conscience shopper who maybe can only afford one item and not coordinates, but can come back two or three months later and find matching clothing,” Caron said. “We’re selling career, smart casual clothing that will be trendier compared to Liz Claiborne, which is more of a classic look.”

The Montreal-based company that runs Jacob stores in Canada also plans to launch a new chain called Joseph this fall, targeting the 35-plus woman, and Gap will test market five stores in September in the U.S. called Forth & Towne, aimed at the same age group.
— Brian Dunn

Retailers from as far away as the U.S. flew in to attend the party, which was held in an abandoned 18th-century convent in the rustic town of Melpignano. A crowd of thousands crammed into the main piazza for the concert, which featured Iggy Pop, reprising his epic hits from the Seventies, and emerging stars like Japanese funky-punk band Yumi Yumi.

Before Iggy Pop wiggled his wiry body on stage, Meltin’ Pot’s general director, Augusto Romano, hosted a roundtable discussion on the challenges facing the denim industry and called for greater marketing innovation to reignite the sluggish European denim market. “We have to reinvent business with a different kind of logic,” Romano said. “The consumer has become savvier than the industry.”
Meltin’ Pot, which announced its arrival in the U.S. last year with an onslaught of advertising, is taking the next step by producing a full-length feature. Meltin’ Pot’s communications creative director, the photographer Rankin, placed a magazine ad in search of the perfect script. The result: the dark drama, “The Lives of the Saints,” in which the cast is dressed in Meltin’ Pot gear.

Actor Daon Broni, who stars in the movie, was not only surprised at the company undertaking the film but by the “wow” factor of the event. “This party is like a fantasy or a movie set,” Broni said. “I feel like I am in another world. We don’t get this in London.”
— Sofia Celeste