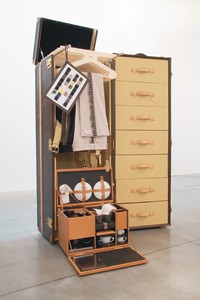 Serda’s ‘365’ Trunk Show
Austrian architect Alexander Eduard Serda is taking wardrobing to the next level, with a line meant to cover a year’s worth of wearing.

In a project dubbed “365,” Serda designed one pair of pants in an identical cut for every day of the year. He created 12 luxurious, leather-lined travel trunks equipped with shelves and vanity kits for the project. Each trunk is labeled by month and includes one style of pants varying in color, texture and print for each day of the month.

For April, Serda designed 30 pairs of jeans with various colors, textures and washes.

“There are so many options when working with denim,” Serda said at the Galerie Anne de Villepoix in Paris, where the collection was exhibited. In July, Paris’ Colette showcased Serda’s July trunk, which boasted the 365 pants in various shades of white in different fabrics.

“People are always afraid of repetition, but by repeating things, you gain peace of mind,” Serda said.

What’s the price to pay to never have to worry about what to wear for a full year? Around $50,000 for one month. Serda has the customer’s backside covered, too. He’s teamed with luxury lingerie firm La Perla to design a pair of underwear to go with each pair of pants.

Velvet will be the look du jour in September, and lightweight English lambswool will add a touch of fall sophistication in October. For the colder months, cashmere pants will keep clients cozy in November, while lizard, ostrich and snake have December covered.

“You have to create order to live in chaos,” explained Serda, who went back to his days as a student in uniform at Phillips Exeter Academy in the U.S for his inspiration.

But Serda’s take on uniforms has an added boost of adrenaline to the doleful outfits of the past. He has built a school, St. Gilgen International School, that will open in Austria in 2008 and have uniforms designed by Vivienne Westwood.
— Emilie Marsh

True Religion Takes SoHo
True Religion plans to open a 1,500-square-foot store in Manhattan’s SoHo section in mid-November, the company’s second retail operation and its first on the East Coast.

The Los Angeles premium denim company is pressing forward with retail, encouraged by the performance of its Manhattan Beach, Calif., unit, which has been doing $2,000 in sales per square foot since opening in December, said Michael Buckley, president of the company. Two more stores will open before the end of the year, he added. The New York store will be at 130 Prince Street.

“We can potentially open 30 stores over the next few years,” Buckley said. “Outside the U.S., we have distribution in 50 different countries, including Asia. Long term, if you look at a business model like Diesel, with 200 stores worldwide, we think we can do more than that.”

The denim business can be fickle, and True Religion continues to expand its design team and introduce product categories to hedge its bets. They include fleece, velvet, T-shirts and woven shirts. The brand is also lining up licensing deals with the goal of generating half its business from denim and half from non-denim products.

“We want to be a vertically integrated, premium global lifestyle brand,” said Buckley, who denied reports that the company is for sale. “It’s a rumor that’s out there. I don’t think it’s an accurate statement.”

“We’ve had another tremendous year,” Buckley said. “We still think we’re in our infancy and there’s a lot of growth left for the company.”
— Sharon Edelson

A Vintage Feel at B&B
Denim manufacturers exhibiting at the Barcelona edition of Bread & Butter last week reined in the over-the-top styling and treatments that defined the industry in recent years, focusing instead on ultraslim looks, clean styles and dark washes.

Executives and brand managers at the three-day exhibition were keenly aware that they could not rely on design alone to survive in a crowded denim market, and many entered the show with business strategies that were as focused as their collections.

Replay is looking for financial investors for a possible public listing in the next three to five years. G-Star is expanding its women’s line, plans to present a runway show in New York in the fall and is embarking on retail development in the U.S. market. Evisu, Nudie Jeans and Lee are segmenting their product offerings to reach a wider customer base and most of the historical companies are mining their archives to offer vintage-turned-contemporary looks.

Exhibitors at the third edition of Bread & Butter Barcelona, which ended Friday, were pleased with the show’s attendance, layout and organization. Attendance increased to 53,774 visitors from 45,000 a year ago. Guests from outside the country accounted for 66 percent of those attending the exhibition.

“Bread & Butter Barcelona is becoming the most important exhibition in Europe, overshadowing the Berlin edition,” said Franco Meglioli, designer of the Italian Sweet Years brand, who favored the move toward more authentic looks. “Until now, the denim industry offered looks that had become too contrived and designed to provoke. We are going back to those who wore denim first — the workers, the farmers — with original buttons and rivets in brass, copper and iron.”

“This is a cyclical business, and, until last year, there was an overabundance of denim,” said Gianmarco Bortoletti, chief executive officer of Replay. “Now, there is a slight contraction and only companies that have a history are successful and continue to grow.”

In order to develop the brand’s retail chain and further expand the business, Bortoletti said the company likely will turn to the stock market.

“We are talking to private equity funds in order to go public in the next three to five years,” said Bortoletti, adding that the American BVC group is “in pole position” to acquire a minority stake in the company.

Wichy Hassan, designer of the Killah brand, which is part of Sixty Group, and Renato Rossi, managing director of the company, also expressed an interest in taking Sixty public.

“There is a lot of enthusiasm here and, contrary to what has been said, denim is so not over,” said Hassan.

Killah opened its first test store within the Miss Sixty unit on Barcelona’s central Paseo de Gracia during Bread & Butter. Themes for Killah included stripes contrasting with checkered motifs, graffiti circa the Eighties, Keith Haring and Andy Warhol-inspired patterns and embroidered butterflies. Hassan described Killah as a “younger, fun” collection compared with Miss Sixty, which is priced 20 percent higher. The company will open a Killah store in Florence next month and is looking at a London location.

Levi’s, Lee and Wrangler also went back to their origins for inspiration.

“We retraced our history and reelaborated our first-ever garment, an apron, and archival workwear looks employed on boat and train travels,” said You Nguyen, senior vice president of product merchandising, design and licensing at Levi Strauss Europe.

Levi’s showcased a top and a wrap skirt inspired by this apron with no metal rivets and cross or triangle stitches.

For its Gold Label collection, Lee showed replicas of original jeans worn by James Dean in the 1952 movie “Rebel Without a Cause.” Lee also showed “vintage jeans with a more contemporary twist, such as high-waist or ankle-length, tapered looks. We call these the new originals,” said Par Lundqvist, Gold Label manager.

The company opened a store in Paris this month and will open one in Antwerp, Belgium, at the end of October.

Wrangler, which like Lee is part of VF Corp., turned to its Seventies washes.

“The real five-pocket jeans are coming back, along with cleaner looks, higher waists and overalls,” said designer Chiara Pacinotti. “Enough with the extreme looks, washes or whiskers.”

Wrangler will open a store in Madrid at the end of September.

“While some are trying to go upmarket and others are lowering their prices, we are expanding on both fronts,” said Roy Schiet, general manager, Europe, at Evisu International. “We are going both ways through a collaboration with Puma initiated six months ago retailing at around 100 euros, or $120, but we are also working with Savile Row for bespoke tailoring on the other end.”

Evisu has signed a deal with renowned laundry Martelli for a new collection made in Italy called European Edition. Jeans will wholesale at about 80 euros, or $96. Martelli works with all top designers and premium denim brands such as Diesel and Replay. Evisu plans to open stores in New York and Los Angeles early next year. Designer Mark Westmoreland added a touch of Mexico and a Western American mood to EV Genes, which is priced 30 percent less than Evisu Heritage Collection.

“The looks are clean and straight, with reinforced pockets and green, oxidized elements,” said Westmoreland.

G-Star is expanding its collection by reaching out to women.

“We have a history in men’s wear, but we are spending more energy and paying more attention to women with a larger, international team with designers from Scandinavia, France and Holland,” said Axel Schukies, sales manager for Germany and Italy.

In line with the brand’s history, the looks are clean, slim, tight and devoid of flashy embellishments, studs or other accoutrements, while focusing on stitching and other minute details. G-Star plans to hold a runway show in New York in September as part of its expansion in the U.S.

“We plan to open 80 franchised stores in the U.S. over the next 10 years,” said Deepak Gayadin, sales director, North America. Coming up next are stores in San Diego at the end of August and in Dallas in October.

“Stores in San Francisco and Las Vegas are in the pipeline,” said Gayadin. The U.S. accounts for 15 percent of company sales. “We feel we have established our business in Europe and our next target now is the U.S.,” said Gayadin.
— Luisa Zargani