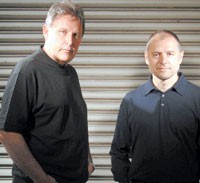 Seven For All Mankind has reached a key time in its evolution.

In the five years it’s been in business, the firm has ridden the crest of the premium denim wave, becoming one of the best-known names in high-end jeans. Now, the $200 million contemporary brand, known for its signature creased jeans, is ready to move beyond its base.

After lining up a new financial backer — Bear Stearns Merchant Banking — the company hired Andreas Kurz to be chief executive officer and settled a two-year legal battle with former co-owners. Chairman Peter Koral said he is ready to round out his customer’s wardrobe with the help of new categories and licensing deals, along with dressing men and children.

“Our engines have started running and Andreas is pushing the accelerator,” Koral said in an interview.

Kurz, whose résumé includes a four-year stint as head of Diesel’s U.S. operations, said, “We predict double-digit [sales] growth for the next four to five years…but we’re not setting ourselves up for failure. We don’t have that magic $1 billion number in our heads.”

The expansion drive is being backed by Bear Stearns’ $80 million investment, which gave the bank a 50 percent stake in Seven. Koral owns the rest.

Bear Stearns executives said their working relationship with Seven will mirror that of others in its portfolio, such as Aeropostale. Bear Stearns will be involved in Seven’s company decisions and stay in frequent communication. John Howard, ceo of Bear Stearns Merchant Banking, and Bo Arlander, senior managing director, will sit on Seven’s board.

They were instrumental in bringing Kurz to the company.

“Peter has built a phenomenal business in such a short time,” Arlander said. “His track record speaks for itself. We’re there to guide the growth path and provide the experience in building it to the next level.”

The company is more focused since the January resolution of a lawsuit between Koral and former partners Jerome Dahan and Michael Glasser.

Dahan and Glasser launched their own line, Citizens of Humanity, in 2003.

“I was very concerned at the time,” Koral said. “We were doing $64 million when they left and I figured if we went down to $30 to $40 million, it would still be a heck of a business to be in because the margins are so good.”

Koral said luck was on his side and he stumbled upon Tim Kaeding, the former head designer at Gap Inc., who joined his firm after Dahan’s 2002 exit. He leads a team that also includes Rebecca Dannenberg and Larissa Noble. Sales climbed to $90 million in 2003 and more than doubled last year.

“In this business, you learn to flow with the punches,” Koral said. “By the end of the day, everybody won.”

Retailers agree that there is room for both lines to succeed, given the growth of the high-end jeans sector.

“They haven’t missed a beat” since the departure of Dahan and Glasser, said Frank Doroff, senior executive vice president of Bloomingdale’s, where Seven is the top denim resource. “As long as they tread carefully, I’m looking forward to seeing what they do next.”

The company has weathered skepticism about its wide distribution strategy. In addition to independent specialty stores, the brand sells to chains such as Barneys New York, Neiman Marcus, Nordstrom and Bloomingdale’s. Department stores represent about 40 percent of revenue.

Some specialty retailers said the company has balanced its distribution effectively.

“They’ve been very protective of my neighborhood and hit the right department stores and right specialty stores,” said Sam Ben-Avraham, owner of the Atrium boutique in New York’s Greenwich Village, where Seven is the top denim brand. “It’s not about how many, but about the quality.”

To maintain that quality, Koral said the company won’t expand its women’s U.S. distribution beyond its current 800 doors, which include Fred Segal in Santa Monica, Calif., and Scoop in New York. It does plan to go deeper with its existing accounts with in-store shops once it has a fully evolved line.

That leaves Kurz with a long list of categories in which to expand, either in-house or through licensing. Kurz’s last job was as president of licensing at Polo Ralph Lauren. Before that, he spent four years at Diesel USA and 13 years at Hugo Boss.

His first goal is to hire a designer for tops, with the brand planning a significant rollout of T-shirts, sweatshirts, camisoles, knits and wovens. Seven has produced some tops in the past, but plans to do so in a larger way.

“Tops will be done in-house to go hand in hand with the jeans,” he said.

Licensing is the next frontier, with plans to find partners for shoes, handbags and jewelry. Kurz said he also would consider expanding the brand into swimwear, which, like jeans, is a category where fit is critical.

Kurz said he anticipates the key accessories categories to bow in fall 2006, and swimwear, by 2007.

The company’s line of men’s jeans, which made its debut in fall 2003, brought in $30 million in sales last year, a number that Koral said he expects to double in 2005.

With a full collection in place, the company will follow with a gradual store rollout in a dozen cities worldwide, including Los Angeles, New York, Paris, Milan, Tokyo, Osaka, Berlin and London.

“The world is going away from one look,” Kurz said. “Shoppers are more sophisticated than that and want more experienced-based retail.”

The brand is already distributed in 64 countries on a wholesale basis. Foreign sales last year came to about $30 million and are on track to pass $55 million in 2005, Koral said. Kurz, who speaks German, French, Italian and Japanese, said he thinks foreign sales eventually will represent half of Seven’s volume.

With the backing of Bear Stearns, Seven also has turned its attention to fighting counterfeiters. Recently, Seven was involved in the confiscation of 500 pairs of counterfeit Seven jeans in New York and cooperated with authorities in the arrest in South Korea of people who were selling replicas of its line. The company is turning its attention to counterfeiters in China.

“People are trying to draft on our success,” Koral said. “Using our logo and trying to copy what we are is something we won’t tolerate.”

Koral also is excited about the prospects of his other businesses, the moderate juniors’ knitwear made by L’Koral Industries for discounters, as well as department stores such as Robinsons-May under the label Next Era. Guiding its growth is his longtime partner and L’Koral Industries ceo, Jane Siskin, who also is overseeing the contemporary LaRok label — the name is “Koral” spelled backward.

There’s enough to keep Koral busy. But he said his attention would be diverted this fall because his son, David, is a potential starting quarterback for UCLA.

“I plan to be in the stands and act like any father would,” he said.
— Nola Sarkisian-Miller

Meltin’ Pot on the Move

Italian jeans brand Meltin’ Pot is pushing ahead with its entry into the U.S. market and plans to relocate to new showrooms in Manhattan’s Meatpacking District this summer.

The brand is owned by Matino, Italy-based Romano and last year generated about $93 million in sales in the European market. It expects to move into its 4,000-square-foot showroom at West 15th Street and Ninth Avenue in July.

Vince Gonzales, chief operating officer of the brand’s U.S. operation, said in an interview the American unit is on track to bring in about $3.5 million in sales this year and wants to hit $20 million within the next three years.

To drive Meltin’ Pot’s growth, Romano said he would unveil an ad campaign in June to reinvigorate the brand and change its marketing approach.

“Jeans are losing their appeal,” Romano said. “They have gotten expensive and there are a lot of things you can spend that money on. Usually, the apparel business talks about itself. We need to look outside it. Nobody talks about these iPods, these other things.…In Europe, you can spend 150 euros on a pair of jeans or a bottle of wine. When you buy a bottle of wine, you are buying something unique. When you buy a pair of jeans, you buy a commodity.”

Meltin’ Pot will be moving from its offices on West 19th Street in Chelsea. The Meatpacking District has been growing in importance as a fashion destination in recent years, attracting more high-end retailers, such as Jeffrey and superpremium jeans brands such as Earnest Sewn, which opened offices in the district last year and unveiled its first store there this month.

While it’s a bit of a haul from the Garment District, Gonzales said it’s a regular stop for his customers.

“A showroom is a lot like a good restaurant — build it and they will come,” he said. “If you want people to think you’re a cool brand, you have to be in a cool place.”
— Scott Malone