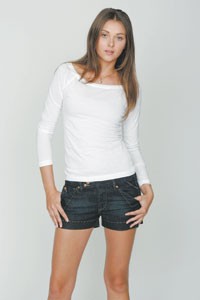 Verhoeven’s Brown Label
In the quest for distressed jeans, Jason Verhoeven used to drag a pair of Levi’s behind his car when he was a teenager in Winnipeg, Manitoba. Nowadays, the 35-year-old designer is opting for a more clean, refined look for his new denim line, Brown Label, based outside of Los Angeles in Glendale, Calif.

Verhoeven, who worked at jeans company Chip & Pepper for 13 years before leaving three years ago to make private-label clothing for surf companies, began working on his first solo design venture last February. He unveiled the debut collection for Brown Label in August at Project Global Tradeshows in Las Vegas. He said he wrote nearly $400,000 in orders at the show from 75 retailers, including E Street Denim Co. in Highland Park, Ill.; Lisa Kline in Los Angeles; Atrium in New York; Blake in Portland, Ore., and Mercer in Seattle. First-year sales are expected to be less than $2 million, he said.

Brown Label, bowing next spring, uses only Italian denim, either rigid or stretch. The company will launch with eight styles for women and will produce jeans for men as well. The offerings include a miniskirt with rope stitching done by hand, capris with a trouser-style waist accented by double copper buttons, and skinny jeans that have a zippered leg. Wholesale prices range from $86 to $104.

Brown Label’s clean look and dark wash appealed to Randy Brewer, general manager for Villains Vault in San Francisco, who said light-colored denim isn’t popular in the foggy city. Brewer added that Verhoeven’s pedigree also was a selling point. “The designer used to be at Chip & Pepper, which is a strong line for us,” said Brewer.

Verhoeven is fully aware that a plethora of newcomers are saturating the premium denim market. But he said many of those entering the market aren’t offering premium quality.

“Everyone is saying premium denim but it’s not premium denim,” Verhoeven said. Instead, he said, some of the Johnny-come-latelies are providing nothing but a premium price. “They’re going for the quick buck and they want to make money because denim is hot right now,” he said.

In contrast, Verhoeven said he put much thought into the subtle details for his line, such as designing the inner edge of the back pocket to curve upward for a more flattering fit. Despite the surfeit of denim brands, Verhoeven said his timing in the market is right. “There is always room if you are good or if the product looks good.”
— Khanh T.L. Tran

Big Sway Weathers Storm
Big Sway Denim, a New Orleans-based premium denim brand, salvaged what it could of its inventory after Hurricane Katrina ravaged its warehouse.

“We didn’t lose everything,” said Hugh Hayden, founder and designer, along with Victoria Vaughn, of the brand that launched last year. “About 65 percent of our inventory is OK.” His company was based on the North Shore of New Orleans near Lake Pontchartrain.

When Hayden reached his warehouse to survey the damage, he took about 1,000 pairs of jeans, an estimated $85,000 in wholesale value, to a local wash house to be cleaned and dried. Then he took the jeans to the Louisiana Capital Area Chapter of the American Red Cross to be distributed to those in need.

“They were so excited to get them,” Hayden said via cell phone. Currently, the Big Sway warehouse and offices have been moved to a temporary space three miles down the road from their previous location. The current Big Sway warehouse has electricity and a working fax machine and Hayden is working on “getting everything going in some type of normal procedure,” he said.

“We’re trying to get back into the swing of things. UPS has just started to run and they’ve been slammed. They are so overwhelmed with packages,” he said. “We’re just trying to wait for the insurance adjuster to come out. We don’t know how long that’ll be, so we’re kind of in limbo right now.” He said he’s hoping to be up and running completely within a week or two.

“We have plans to continue on with the line and work on new designs. We started a T-shirt line and that is a small part of the business that’s really going well,” he said.

The Big Sway collection gets its inspiration from the South. Key styles include the EmmyLou, a skinny, peg-leg style designed to fit into cowboy boots, and the Delia, a slouchy, comfy, boyfriend style.

In the meantime, Big Sway Denim has teamed up with actor and comedian Vince Vaughn, Victoria’s brother, and his Wild West Comedy Show to produce T-shirts for the show. The “Vince Vaughn’s Wild West Comedy Show” is now playing in 30 cities over 30 days, ending Tuesday. Big Sway’s women’s and men’s T-shirts and tanks are available for purchase on the Wild West Web site, wildwestpictureshowproductions.com.

Ranahan’s Western Roots
In cowboy lingo, the ranahan is a ranch’s top cowhand. The sister team of Allison and Amy Gammon hope their new denim label, Ranahan Jeans, will ride to the top of the crowded market for designer denim.

Allison, 32, and Amy, 30, decided to start their own company in April, after serving a stint at Farmer Jeans in Los Angeles. Both share in the design responsibilities, while Allison handles organization and Amy deals with production issues.

Ranahan’s Western feel is in the Gammons’ blood. The Los Angeles-born sisters own a farm in central Florida where they breed and sell thoroughbreds for racing. Their father, James Gammon, a character actor who made his cinematic debut in “Cool Hand Luke” in 1967, provided his own inspiration as well. In the Seventies, the senior Gammon took his daughters to a theater in Hollywood where other character actors met and watched movies about the Old West. “We took those roots and put them in the jeans,” said Amy Gammon.

The theme for the fall and spring collections is “Urban Cowboy,” while the influence for next fall’s lineup will be “Silverado.” Both movies featured their father. The Gammon patriarch also will model the men’s jeans, which will bow next year.

Ranahan has already rounded up orders from 60 stores, including Lisa Kline in Los Angeles and Planet Blue, which has doors in Venice, Malibu and Santa Monica, Calif. The sisters anticipate generating $500,000 to $750,000 in wholesale sales for the year ending in April, and have their sights set on achieving $1 million in revenues during the second year in business. Jeans wholesale for between $73 and $95.

Jeans from the debut collection, which began shipping Sept. 30, are reminiscent of Wrangler jeans from the Seventies. The yellow and orange stitching pops out from the muted indigo, which has a clean, flat finish. The jeans have a quarter-inch hem, just as vintage Wrangler’s did, and oversized belt loops to fit wide belts.

Amy Gammon said they were careful to avoid details that resembled those seen in the jeans from their former employer. She said while Farmer will do special stitching on the jean’s fly, Ranahan will have a side stitch. The Gammons also seared “rj” on the pockets with a custom-made cow brander.

What the sisters claim will make Ranahan stand out is a pocket sewn a couple of inches above the hem inside a pant leg, where a woman can insert a tube of lipstick.
— K.T.L.T.

Serving Earnest Sewn
The premium denim brand Earnest Sewn and the restaurant Pastis are working together to create the perfect pair of lived-in jeans.

Beginning this month, the waitstaff at the bistro in the Meatpacking District in New York will be outfitted in Earnest Sewn’s rigid premium jeans for roughly three to six months. After a few months of wear and tear, Earnest Sewn will take the worn jeans from the staff and replace them with a new pair. The returned jeans will then be used as the standard by which Earnest Sewn designers will authentically duplicate a pair of real worked-in, lived-in jeans.

Pastis seems to have a special connection to the denim brand. After all, it was there in 2004 that the founders of the brand conceived the idea to launch Earnest Sewn over steak sandwiches and a grilled chicken paillard.
— L.D.