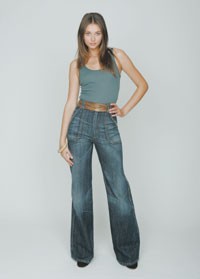 Waist Not, Want Not
Jaycia Gayle is offering an alternative for women who are tired of constantly pulling up their low-riding jeans. Her new premium denim label, Jainesse, specializes in high-waisted jeans that evoke a more refined and girlish era.

“It’s more feminine to have a high-waisted jean,” said Gayle, president and designer of the Chino Hills, Calif., label that will bow for spring. “I shouldn’t be wearing a lot of low-waisted jeans and other people shouldn’t, either. It’s not very flattering and it makes us look like boys.”

Jainesse signals a return to cleaner, dressier looks and the prominence of the waist, as seen in the popularity of belts and the appearance of high-waisted trousers on the runways.

“Everything is going back to proper dressing with tailored silhouettes,” said Christine Lee, women’s wear buyer for New York’s Atrium, who will add Jainesse to its mix of more than 20 women’s jeans brands.

Reasoning that jeans with high waists are probably the next step for the market, Lee said she also bought similar high-waist bodies from European companies.

“I actually have some [customers] looking for something different in denim,” she said.

Gayle said the rises in her jeans measure 8, 10, 11 and even 13 inches. For her inaugural collection, she offers five-pocket jeans, a jeans jacket and a short-sleeved jumpsuit that wouldn’t have been out of place on the TV series “Charlie’s Angels.”

Gayle launched Jainesse with no prior design experience, with the exception of a few courses she took in fashion merchandising at California State University, Long Beach. Her understanding of the denim market came from nine years working at retailers such as Nordstrom and Fred Segal.

Jainesse is currently sold at Fred Segal in Los Angeles. It will ship next month to Atrium and Sharon Segal/Fred Segal in Santa Monica, Calif.

With wholesale prices ranging from $75 to $120, Gayle said she aims to hit the $1 million mark in first-year sales.

Gayle said she may not stick with designing high-waisted jeans forever, preferring to buck trends and create what is currently unavailable in stores. For her first collection, she created four washes, including a bleached wash and a dark rinse that is, in her words, “really good for when we go out at night.” By next fall, Gayle said she would develop a full women’s line with dresses, T-shirts and twill fabrics.
— Khanh T.L. Tran

The Stone Mountain, Ga.-based company launched three years ago originally under the name of the Perazzi Apparel Co. At the time, they were following the pack, introducing a denim line aimed toward juniors. Early sales were disappointing.

“We learned that juniors are much more brand-conscious and trend-conscious, while our focus is more on fit, with clean, classy styling,” said Melody Nunez, vice president, who founded the line with attorneys Dan and Claire Jason. “Buyers told us the real need was in missy denim, for a line that really fit.” Nunez set out to design a fit that accommodated curvy women and eliminated the “waist gap.”

“It’s a misconception that all larger women have large waists,” she said. “Large sizes aren’t all the same.”

Shortening the name to PZI Denim, the company changed from junior to misses’ sizing 6 to 16 a few seasons ago. The fall 2005 collection has 36 pieces, at premium prices, with jeans wholesaling from $27 to $45, and tops from $17 to $28. With several cuts of traditional five-pocket styles, the line, which is bias-cut and uses lots of stretch, also features various washes and sandblasting techniques. Embellishment is kept to a minimum, such as a subtle spray of rhinestones, sequins or stitching.

“Our target customer is in her late 20s to late 40s. She’s a business woman, wife and mother who still wants to look sexy and sophisticated,” said Nunez.

The strategy is paying off. Sales for 2005 are on target for $2 million, up from $250,000 last year. At the September MAGIC Show, PZI picked up 60 new accounts, for a total of 350 specialty stores nationwide. Department stores are a key part of the company’s future distribution strategy. A big break came in the spring when Macy’s picked up the line in 11 stores, in the Southeast and Cincinnati.

This fall, PZI held three “Jeanology” events, in Macy’s stores at Lenox Square, Greenbriar and South DeKalb malls in Atlanta. With fit clinics, personal appearances by the owners, designers and local radio personalities, the promotions have boosted sales. At Macy’s Lenox Square store, the line sold $50,000 in three weeks, and is on reorder, said Nunez. With production in China, PZI is building a replenishment program on eight cuts of basic styles, to appeal to department stores, and is increasing advertising and marketing budgets to get its fit message across.

Riel Spencer, manager, Van Dykes, a women’s and men’s specialty store in Southfield, Mich., has carried PZI for four months. She “loves the line, but it doesn’t sell itself,” she said. “You have to get somebody in it, get them to try it on, because the fit is great,” she said. “It’s for ‘apple bottom’ girls, and definitely not for skinny ones.”
— Georgia Lee

Swift Galey Signs China Partner
Swift Galey has entered into a partnership with China’s Lucky Textile Group and is embarking on the construction of a manufacturing facility capable of producing 50 million yards of denim a year.

John Heldrich, chief executive officer of the Atlanta-based company, said Lucky’s state-of-the-art weaving, dyeing, finishing and printing plant and its desire to build a denim facility made it an attractive partner.

“Of all the facilities we visited, theirs was the nicest we’d been to,” said Heldrich. “What was particularly appealing was that they had the infrastructure to support a new denim facility right next to their twill facility.”

Lucky also has the advantage of location. The company is based in Yixing City in China’s Jiangsu province, less than three hours west of Shanghai, according to Heldrich.

Heldrich is also confident the company, which manufactures denim, twill and corduroy for customers such as Gap, Abercrombie & Fitch, Guess, Diesel, Levi’s and Seven For All Mankind, will be able to weather any slowdown in the denim market.

“Denim will always be a giant category and those of us that can create the type of products that are differential will go through the ups and downs and be OK,” said Heldrich.

Swift Galey has been conducting business in Asia and the Philippines for 15 years, said Heldrich. Partnering with a Chinese company is a move intended to provide customers with balanced sourcing options.

“Safeguards or not, there’s tremendous growth for the future here,” said Heldrich.

Financial details were not disclosed and the partnership is still awaiting approval from the Chinese government.
— Ross Tucker

Walter Expands Into Denim
Walter, the contemporary line known for its form-fitting blazers, is launching denim for spring.

“It’s a natural extension of the Walter collection,” said Walter Baker, designer and chief executive officer of the New York brand. “I wanted it to complement my collection, so I’ve created a clean, chic look with washes that are simple and elegant.”

To keep the denim line consistent with the core collection, Baker steered cleared of embellishments and distressed washes. Instead, the washes are dark and clean, and the bodies are tailored.

“I didn’t use any crazy studs or rips and tears,” Baker said. “That look, to me, is finished. I want to take it to the next level, and the next wave of denim is clean and simple.”

The jeans, made from Italian denim, are manufactured in Italy and feature patch pockets and large decorative buttons.

The collection will begin shipping in February and will hit specialty stores in March. The wholesale price range is between $80 for capris up to $135 for a long-sleeved denim jacket. Jeans wholesale for about $85.

“I really played with the fit for awhile,” Baker said. “It’s not too low, it’s not too tight. It’s the right proportions. When you look at a girl in these jeans from behind, it’s just flattering. It draws out all her features.”
— Lauren DeCarlo