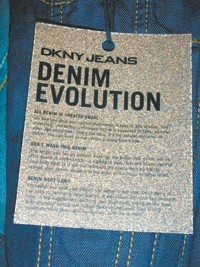 Wearing It Raw
DKNY Jeans is getting raw for winter.

For December selling, the brand is experimenting with a new concept, raw denim. Available for women, men and juniors, the company is launching a capsule collection of jeans, skirts and jackets all made from denim in its original dark indigo state.

“We see this as a major trend happening in denim, we are just making it wearable for our customer,” said Janice Sullivan, president of DKNY Jeans. “The denim will wear with age and end up fitting to the lifestyle of the person, so it will become a very personal piece in his or her wardrobe.”

For women, the jeans are made with 2 percent spandex for an easier, more comfortable fit. All of the denim is 10-oz. and coated with resin that molds to the shape of the wearer. Each piece is shipped with a piece of sandpaper, so the customer can sand wherever they choose to make the denim look a bit more broken in. Along with the sandpaper is a tag with instructions.

“We tested the jeans on our design team,” Sullivan said. “They wore the jeans around and sanded the knees, elbows, wherever they saw fit. It was a great way to see how the denim would wear.”

Since the denim is raw and never put through any washing processes, the company recommends that the customer wash the jeans as little as possible.

The tag reads: “It’s going to wear, tear and shape itself to your body (that is if you can withhold the soap). Here’s a tip: To refresh your denim, throw it in the dryer with a fabric softener sheet. The worse you treat your denim, the better it will look. Don’t worry, it can take it. No matter what you do, it will evolve into your own personal style.”

The line, which Sullivan said will expand if it does well at retail, wholesales from $24.50 to $39.50, which is priced a bit higher than other denim products within the DKNY Jeans brand.

“These pieces are truly special, they will shape to your lifestyle,” she said. “Regular denim that is already washed just wouldn’t shape this way.”
— Julee Greenberg

The 12-year-old Italian denim brand plans to launch a higher-end capsule collection at next month’s Premium trade show in Berlin. The line will be in stores worldwide next February.

An offshoot of the company’s main line, Pure Meltin’ Pot will include 20 styles of five-pocket women’s and men’s jeans, cut and produced with detailed tailoring techniques.

“We wanted to put every intricate detail that we know about denim into this collection, to really push the aspects of washes and the way the jeans are constructed,” Augusto Romano, general manager of Meltin’ Pot, said in an interview from the company’s headquarters in Puglia, Italy. “Every part of the collection is produced in Italy and some of it is even hand-finished.”

Jeans from the collection will be treated with a new wash to give a slightly used effect, combined with a wrinkle finish and a distinguished back pocket adorned with prints or embroidery. Styles will include superslim, slim and regular fits in modern denim colors, such as shiny black, purple, red and pearl gray.

The capsule collection is intended for a higher-end market compared with the brand’s main line. Pure Meltin’ Pot jeans will retail from 160 euros, or $206, to 180 euros or $230, for those styles treated with more particular washes.

“We are aiming for more boutique stores and those department stores that already stock higher-end fashion jeans lines,” said Romano, who is seeking to distribute the collection in a maximum of 1,500 doors globally.

Romano said he wants to keep the Pure Meltin’ Pot collection strictly jeans for the next two to three seasons.

Adding new collections like Pure Meltin’ Pot is part of the brand’s strategy to turn a small company into a more robust and international player in the denim market, he said.

“There is a crisis in denim now,” he said. “There’s been a lot of growth in the past seven years. Now it’s time to be ready to respond to the way the market is evolving. We are trying to focus our collections for every aspect of that evolution.”

Romano’s vision is to grow annual volume of 80 million euros, or $103 million, to 500 million euros, or $643 million, by 2011. He also is concentrating on expanding Meltin’ Pot’s distribution from 2,000 doors to 5,000 in five years. The company this year will reach new markets in Japan, Australia, Russia and South America.

To stimulate sales, Meltin’ Pot intends to launch an international print campaign for its 2006-07 fall-winter collection. The advertising, shot by British fashion photographer Rankin in the Sicilian town of Gibellina, will run in international media starting in September. Meltin’ Pot will invest 2.5 million euros, or $3.2 million, in its advertising.
— Stephanie Epiro

In the Model’s Eye
Models are among the happy few who can pull off both drainpipe and baggy, boyish jeans styles.

“Jeans have definitely become the casting-call uniform for top models as they consider themselves a bit above the law,” said Dawn Wolf, editorial director for IMG, here, who lists APC, Paul & Joe, Superfine, To Be and Diesel as among models’ favorites.

“Jeans are one of the things, along with shoes and bags, that girls are willing to spend a lot of money on as there are a million ways to wear them,” said Emma Mackie, a booker at Marilyn in Paris, who added that skinny styles are the style du jour.

“Models especially like Miss Sixty for its long lengths,” explained Mackie. “But there are more and more cool labels out there that the girls are lapping up.”

WWD asked a handful of models to speak about their favorite jeans and here’s what they said:

LILY COLE: For busy British model Lily Cole, foraging for jeans in flea markets is way too time-consuming. “You have to be extremely lucky to land a pair that fits from a market stall,” said Cole, who prefers to pop down to the sci-fi Bodymetrics machine at Selfridges in London to order made-to-measure jeans. Diesel and Lee also count among her favorite brands. “Everyone needs a pair of straight-legged, comfy jeans, but I’m really digging the skinny look at the moment,” she said.

INES SASTRE: Spanish model-turned-actress Ines Sastre, who is five months pregnant, said she misses being able to slip into a pair of jeans. “I love wearing comfortable, stylish pairs, like Earl jeans,” said Sastre. “Whether it’s a premium brand or a vintage pair, the price isn’t really a factor. I just like low-waisted styles that fit like a second skin.”

DARIA WERBOWY: The Canadian likes to swing between baggy and superskinny styles, and often borrows from her boyfriend’s wardrobe. “I love men’s oversize, baggy Levi’s, but there’s also a little store in New York, the name of which I’m going to keep secret, where I go for trashy Eighties skinny jeans that I own in every color,” said Daria, adding that her most-treasured pair is a high-waisted, straight-legged Levi’s 536 model that she’s had for “donkey’s years.”

IRINA LAZAREANU: Budding rock star and model Irina Lazareanu, who’s recording her first album with Sean Lennon, likes to strut around her local Marais neighborhood here in tighter-than-tight Ernest Sewn jeans. “A friend introduced me to the brand and they’re the perfect fit,” said Lazareanu, who has a hard time finding the right size, due to her petite frame and “lack of hips. It’s important jeans are comfortable, as most women live in them — at least, I do,” said Lazareanu. “And if I come across the right pair for my frame, I’m willing to shell out big bucks if necessary, as I see it as an investment.”