Lisa Jennings fuses fashion, art and charity through her limited-edition collections that reinterpret an artist’s work directly on clothing via hand-embroidery and other techniques. 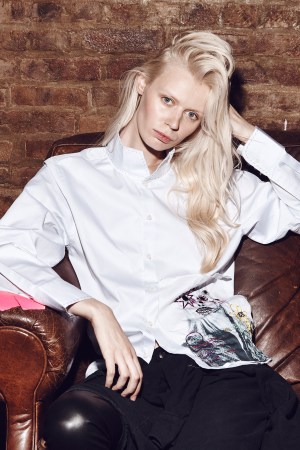 It’s rare to see something truly original in fashion these days, but Lisa Jennings has achieved it with Dept. of Culture. Though founded in 2011, the brand has recently started to gain more steam and will show its spring 2016 collection at Paris trade show Tranoi from Oct. 2 to 5.

With headquarters in both New York and Texas, Dept. of Culture fuses fashion with art and charity through limited-edition collections that reinterpret an artist’s work directly on clothing via hand-embroidery, beading, screen prints and appliqués. One hundred percent of the brand’s proceeds fund permanent, community-based art installations. In 2014, for example, profits funded a mosaic mural in collaboration with artist Tracy Van Duinen at The Rise School in Austin, a pre-school for developmentally challenged children.

Every season, Jennings chooses different artists to collaborate with, and artists can also submit their work for consideration. “Their art usually has to make me smile or elicit some sort of emotional connection,” she said of her curation process. “I have to like the artist personally and I have to like what they stand for. And in terms of the work, it doesn’t have to be cutting-edge; it doesn’t have to be what’s new and what’s cool. It’s just about what I connect with.”

Past collaborators include artists Costanza Theodoli-Braschi, Cara Carmina, Cameron Fielder and Géraldine Federspiel, better known as KNAPFLA. For spring 2016, she’ll be collaborating with Jose Romussi and noted “yarn bomber” Magda Sayeg. “Now that I’m getting some momentum, it’s exciting because I’m able to work with artists who are a little further along in their career and are excited to do something different,” Jennings said. “It provides artists with an alternative platform; it’s something for them to branch out with.”

Jennings, a Toronto native, spent 20 years living in New York and dabbling in numerous professions, including dance — she even toured with the New York Knicks — as well as Web design and art, having worked for the photographer Peter Beard. In 1994, she settled in Austin, where she has lived with her family ever since. She travels weekly between the two cities and also works with artisans in India, Turkey and China who embroider each unique, hand-numbered piece.

On a recent afternoon in Bryant Park, Jennings’ eccentric sense of style managed to stand out even on the colorful streets of Manhattan. Her eye for all things whimsical and playful — she’s an avid collector of Kidrobot toys — translates to each of her collections, which feature embroidered renderings of playful illustrations or humorous phrases. Each season focuses on a single category; the fall 2015 collection was cashmere knitwear-based and spring 2016 is rooted in cotton shirting and shirtdresses.

Stocked in London’s Harvey Nichols, as well as boutiques such as Brooklyn Fox in New York, By George in Austin, and on the brand’s e-commerce site, the collection ranges from $880 to about $1,000.