Derek Jeter: Not Short on Style

Those testy contract negotiations were history by the time WWD got a one-on-one interview with Yankees captain. 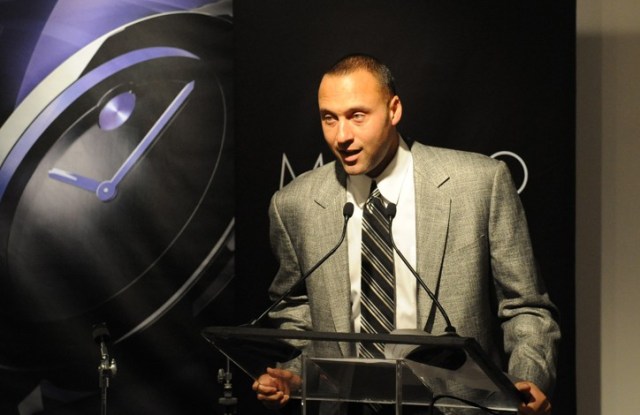 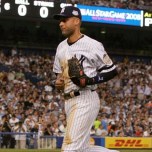 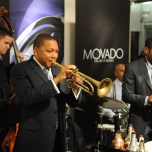 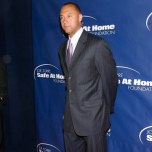 NEW YORK — Those testy contract negotiations were history by the time WWD got a one-on-one interview with Derek Jeter on Monday night. In town for Movado’s “Night of Discovery” event at the School of Visual Arts’ gallery, the Yankees captain proved fairly loose-lipped when it came to his sartorial selections. He noted his own fashions gravitate to one type — “comfortable and convenient” — and considers President Obama to have great style.

This story first appeared in the December 9, 2010 issue of WWD. Subscribe Today.

But don’t ask him to wax on about defining style with a capital “S.”

Besides, Jeter doesn’t scour the retail racks — “I don’t actually go in the stores” — and doesn’t even let his smartphone do the shopping. “I get by on gifts,” he revealed. “I guess you can call it laziness.”

That does not, however, keep him from citing a favorite designer — Giorgio Armani — or from noting that he sometimes wears pinstripes off the field. On this night out, however, he’s in neither, having chosen a solid gray suit custom-made by a Chicago tailor. “I have weird sizes,” he explained.

And, no, Jeter has no intention of launching a jewelry collection à la Angelina Jolie or his own men’s wear label. “I don’t know if too many people would purchase any of my fashions,” he said.

One presumes he meant aside from the special edition Movado Series 800 Derek Jeter Chronograph, launched in 2008, and the fragrance and skin care collections he has with Avon.

Currently, Jeter is in the midst of cleaning out his closet and dumping out “old things I have that I thought I would wear at the time and never saw again.” He skimped on the details except to say those edits are jackets, shirts and suits in “wild colors.” Pressed for specifics, he said, “Those old Cosby and Coogi sweaters.”

If the New Jersey native has one style regret, it’s a grooming issue. “I had a shag in high school, like Ralph Tresvant of [R&B group] New Edition,” he recalled. “I shouldn’t be telling you this, but it’s true.”

There is one fashion item Jeter can’t live without: “comfortable shoes.” For instance? “Jordan, Nike,” he said, though on Monday night he sported a pair of Ferragamos. “A lot of times people try to be stylish and it’s not comfortable.”

Still, he’s willing to branch out. Told about Jimmy Choo’s upcoming return to the men’s market, Jeter was more than enthusiastic. “Send me everything you have — size 11-and-a-half,” he laughed. “I’ll be able to tell you what I think will work.”

His willingness to talk the stuff of style played into the “Night of Discovery.” The goal: to inspire the 34 high school students present — all Jeter’s Leaders participating in his Turn 2 Foundation’s leadership program — in the areas of art, music and fashion. “The main point we’re trying to convey,” said Jeter, who started the charity in 1996 with his father, Charles, a substance abuse counselor, “is leadership, regardless of what industry you’re in, whether it’s fashion or arts or music or professional sports. It’s the same coming from all walks of life.”

The teens listened to a panel discussion among Jeter, jazz legend Wynton Marsalis, SVA student Will Varner and Eugene Tong, senior style editor at Details magazine, who said he had his parents to thank “for letting me come to New York without a job.” In fact, families got a few shout-outs, including from Jeter, whose parents and sister Sharlee were in the audience. (Sharlee is president of the Turn 2 Foundation.)

Jeter’s Leaders were then given a tour of the artwork in the gallery and took in a rousing performance by Marsalis and his band. (Marsalis is a long-time Movado brand ambassador.) Movado also recognized three emerging artists and two musicians with its 2010 Future Legends awards. They included SVA students Varner, Jungyeon Roh and Kelley Hensing, and singers-cum-songwriters Katie Cole, from Australia, and Californian Nana O. Owusu (aka Sergi Q), whose music was selected to accompany the television ads for Movado’s new Bold collection.

Marsalis, meanwhile, had more to sound off about on music (natch) than fashion. His favorite tunes? Anything with “a development section,” from works by Duke Ellington and Count Basie to Beethoven and Wagner. “I’m not looking for a hook or something catchy,” he told WWD post-panel.

So no Justin Bieber on the playlist? “No, never. Under no circumstances,” replied Marsalis. “There’s no way I could do that — and not out of being a snob. If I gave you the option between eating the greatest hamburger you could possibly taste and you told me you wanted to go to McDonald’s, I would look at you, like, huh? I’ll bring the hamburger to the McDonald’s and sit with you. I’m a musician. There’s no reason for my taste to be like that.”

Conversely, Marsalis, artistic director of Jazz at Lincoln Center, had high praise for New York Fashion Week’s move to his turf. “I loved [the tents at Lincoln Center]. We never had that much fun walking down the street in our lives,” he said. “Usually, it’s pretty good around here, but boy, the quality and level of activity went up quite a bit. We haven’t seen anything this good around here. I’m a big fan. Bring it back — we need that.”