The designer's first diffusion line is named after his company's address in New York. 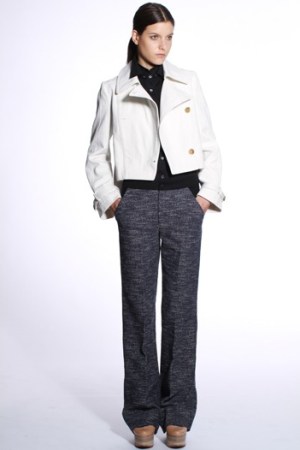 NEW YORK — From his modernist office on Crosby Street here, Derek Lam has a perfect view of the trendy SoHo street and the people who frequent it during the day.

Recently, that vista has given him inspiration for a new project the designer is embarking on — a diffusion line that brings his sportswear sentiment to a wider audience and is suitably named 10 Crosby Derek Lam. Although he has had the idea of a diffusion line practically since launching his brand in 2003, Lam said he was waiting for the right timing.

“With the greater awareness of the Derek Lam brand in the last few years, it seems the right moment to expand to the audience to include the 10 Crosby collection,” Lam said. “After the tough economic times, there definitely is a customer looking for fashion with an accessible reach, but considered in a fresh manner.”

Derek Lam chief executive officer Jan-Hendrik Schlottmann echoed the sentiments. “We have been waiting for this for a long time,” he said. “We felt it was important to have a real opinion, not just a watered-down version of the main collection. We feel Derek Lam is now established enough to bring it further for a client with different needs.”

Where the designer line may have a stronger element of runway and evening looks, 10 Crosby picks up on some of Lam’s design elements, like his preference for jersey and soft tailoring, but uses them in more utilitarian, everyday ways. “One of the values I really want to express with the 10 Crosby collection is that while the collection has a more accessible approach, it is still about clothing of value and integrity of design,” Lam said. “The idea of cheap, disposable, fast fashion is not what this collection will be about.”

Over the past few months, the company assembled a team of executives for the new venture, including Kristina Markovic, senior vice president at 10 Crosby Derek Lam, and Elizabeth Giardina, its senior designer.

“We looked around at the women we knew and the brands out there, and thought there definitely was a gap,” Markovic said, explaining 10 Crosby. “It’s the urban woman who has a lot going on, and who needs clothing to take her from day into night.”

Giardina elaborated that the customer could be anywhere between the ages of 20 and 45. “I like the idea of Dree Hemingway and Mariel Hemingway,” she said. “She is urban, but in a soft way — she has a downtown lifestyle, and is sophisticated and cultured.”

The collection will launch during the June market for a resort/pre-spring delivery to department and specialty stores on Nov. 1, where it is likely to sit alongside lines such as Burberry Brit and Elie Tahari. Suggested retail price points range from about $195 to $895, and while Schlottmann declined to give sales projections, he said it would eventually exceed the main line, which is currently wholesaled to about 180 doors.

The launch will be exclusive to North America for the first season, but the company hopes to expand it to Japan and Europe for spring 2012. The new diffusion line will also be available in the designer’s Crosby Street boutique, where it will be merchandised alongside his main line “so that clients really get the feeling and understanding that the Derek Lam collection and 10 Crosby collection are considered together as one point of view, one design philosophy,” Lam said.

Widening his reach is something that appealed to Lam. He got a taste of it with his just-launched crowdsourced collection for eBay, which gave him further impetus to go ahead with the diffusion concept. “I was able to have an online response,” Lam said. “What I got was that they totally get fashion and enjoy it.”