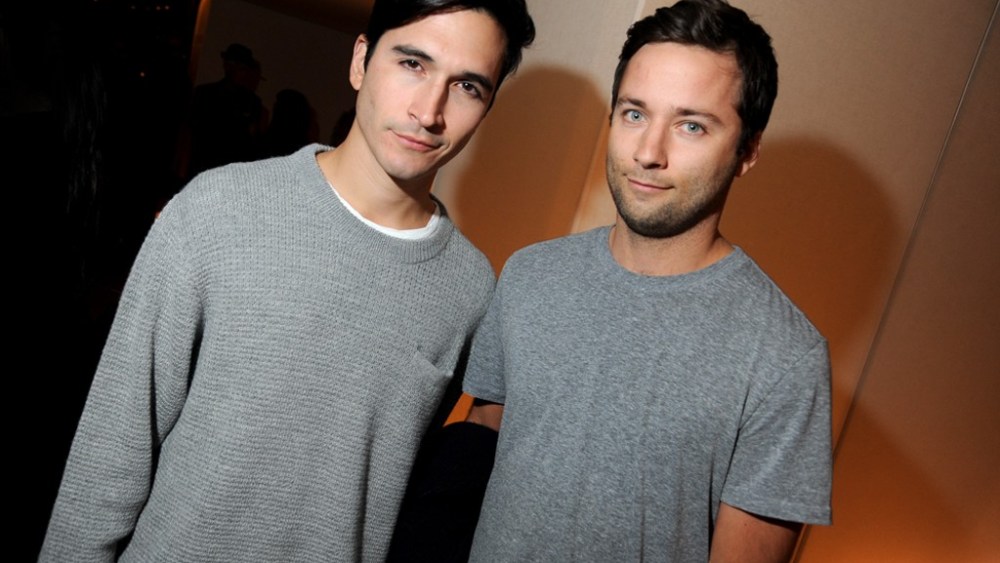 Designers thriving as a package deal is nothing new—remember how hot Byblos was under the dual direction of Keith Varty and Alan Cleaver in the Eighties? Now more than ever, there seems to be a proliferation of designing power couples. It presents an interesting practical dynamic—does one drape while the other trims?—compounded by the nature of the relationship, which can range from best friends to lovers to former lovers to siblings and even identical twins. Here, a dissection of a few of fashion’s famous duos.

Jack McCollough and Lazaro Hernandez, Proenza Schouler
Together since: Parsons, 1999
Relationship status: Partners in life and work.
Which one’s which: To paraphrase Loïc Prigent: Jack is the cute one and Lazaro is the cute one.
Influential fans: Barneys
Breakthrough collection: Senior thesis collection 2002, picked up by Barneys.
Signature look: Arty downtown edge.
Hours spent together per day: The majority of them.
Division of labor: They sketch separately and compare notes.
Biggest point of contention: It’s part of the creative process.
From the fall WWD review: “This could be considered a watershed collection for Proenza Schouler’s Jack McCollough and Lazaro Hernandez.”

Maria Grazia Chiuri and Pierpaolo Piccioli, Valentino
Together since: Fendi, 1989
Relationship status: Professional. Both are married to other people.
Which one’s which: XX, XY
Influential fans: The tan man himself, Valentino.
Breakthrough collection: Spring 2013 couture, cementing their new vision at Valentino.
Signature look: Modest romance with a monastic edge.
Hours spent together per day: “Too many.” —Piccioli
Division of labor: “We don’t have any rules, so we don’t divide.” —Piccioli
Most likely to argue over: “The only real problem is we do too many looks. The editing.” —Chiuri
From the fall WWD review: “A confident sensuality pulses through the dress silhouette they’ve singled out as their own: long slim sleeves, high neck, restrained A-line skirt.”

NEXT: Ashley and Mary-Kate Olsen, The Row >>

Ashley and Mary-Kate Olsen, The Row
Together since: In utero.
Relationship status: Twin sisters/mini-mega moguls.
Which one’s which: Mary-Kate tends toward grunge.
Influential fans: Millions of tweenage girls circa the mid-Nineties.
Breakthrough collection: Wal-Mart, circa 1998.
Signature look: Ultraluxe classics with a minimalist bohemian vibe.
Hours spent together per day: 12
Division of labor: “We do everything together.”
Biggest point of contention: “Who gets to take home which sample.”
From the fall WWD review: “The fact that Ashley and Mary-Kate Olsen, who have embodied ‘cool’ at least since early adolescence, don’t aspire to said classification as fashion designers sets them apart from many of their contemporaries working today.”

David Neville and Marcus Wainwright, Rag & Bone
Together since: Teenage schoolmates turned business partners in 2002.
Relationship status: A rare fashion breed: two straight, family men.
Which one’s which: Neville is the pretty blond; Wainwright has the grungy Brit appeal.
Influential fan: Andrew Rosen
Breakthrough collection: Fall 2010, when they held a separate show for women’s.
Signature look: English tailoring meets street.
Hours spent together per day: “We share an office….But we don’t go home together.” —Wainwright
Division of labor: Wainwright runs design; Neville handles the business end.
Biggest point of contention: “Art and commerce.” —Neville
From the fall WWD review: “To be clear, no one looked like anything resembling a flight attendant, which is a great thing.”

NEXT: Dan and Dean Caten, Dsquared2 >>

Dan and Dean Caten, Dsquared2
Together since: See Olsens.
Relationship status: Inseparable
Which one’s which: Your guess is as good as ours.
Influential fan: Renzo Rosso
Breakthrough collection: Spring 2003, first women’s collection.
Signature look: Tailored kitsch.
Hours spent together per day: “We’re 24/7. We live together. We sleep together. We do everything together besides that.” —Dan
Division of labor: “I’m more paper, Dean’s more hands.” —Dan
Biggest point of contention: Sharing clothes.
From the fall WWD review: “Dean and Dan Caten re-created a wartime jazz club replete with a model acting as a smoky singer and handsome soldiers lounging on banquettes.”

NEXT: Humberto Leon and Carol Lim, Opening Ceremony and Kenzo >>

Humberto Leon and Carol Lim, Opening Ceremony and Kenzo
Together since: Freshman year at UC Berkeley; founded Opening Ceremony in 2002.
Relationship status: BFFs and business partners.
Which one’s which?: XX, XY
Influential fans: Chloë Sevigny, Spike Jonze
Breakthrough collection: Chloë Sevigny for Opening Ceremony.
Signature look: Kooky downtown cool
Hours spent together per day: All day, every day.
Division of labor: “Technically, I’m the creative director and Carol is the ceo.” —Leon
Most likely to argue over: Food and going out.
From the fall WWD review: “For all the decoration, the clothes were commercially Zen, a reminder that Lim and Leon are savvy, seasoned merchandisers.”

NEXT: Shane Gabier and Chris Peters, Creatures of the Wind >>

Shane Gabier and Chris Peters, Creatures of the Wind
Together since: 2007 at the Art Institute of Chicago, Gabier was a teacher and Peters a student.
Relationship status: Partners in life and work.
Which one’s which: Peters = peroxide blond.
Influential fans: CFDA.
Breakthrough collection: Fall 2012.
Signature look: Whimsical geek chic.
Hours spent together per day: All, when they’re in the same city.
Division of labor: “It’s a fluid process, and we’re both truly involved in every part.” —Gabier
Biggest point of contention: “Chris always wants to edit more. I always want to add more.” —Gabier
From the fall WWD review: “Their lineup of what could be described as glamour nerds wore looks reminiscent of uniforms.”

NEXT: Kate and Laura Mulleavy, Rodarte >>

Kate and Laura Mulleavy, Rodarte
Together since: Laura’s birth, 1980
Relationship status: Sisters.
Which one’s which: Kate has bangs.
A-list advocate: Natalie Portman
Breakthrough collection: Fall 2005, WWD front page.
Signature look: Esoteric California romance.
Hours spent together per day: A lot.
Division of labor: “In many ways, we work as one person.” —Kate
Most likely to argue over: “We don’t look at our process in terms of agreement versus disagreement.” —Laura
From the fall WWD review: “Then it was onto the trippy side of Cali, wherein the Mulleavys imaginatively dressed up lowbrow stoner staples.”

Viktor Horsting and Rolf Snoeren, Viktor & Rolf
Together since: Art school,1988
Relationship status: Purely professional. They are not twins.
Which one’s which: Horsting is more mustachioed.
Influential fans: Renzo Rosso
Breakthrough collection: Russian Doll collection with Maggie Rizer, fall haute couture 1999; Flowerbomb, spring 2005.
Signature look: Fashion as theater.
Hours spent together per day: Hard to say since “work is always on our minds.”
Division of labor: “There is not a division of labor—we find it natural to work as one, in unison. We work and design in a synchronized partnership, and we both sketch, with one starting a drawing and the other one finishing it.”
Most likely to argue over: “We find that if we don’t agree on something, it’s not right.”
From the fall WWD review: “In a welcome move, the designers softened some of their verging-on-silly proclivities.”

Mark Badgley and James Mischka, Badgley Mischka
Together since: Met at Parsons in the Eighties; started Badgley Mischka in 1988.
Relationship status: Got married last month.
Which one’s which: Mark’s gone gray.
Influential fans: Cornelia Guest
Breakthrough collection: Fall 1991
Signature look: Glamour girls.
Hours spent together per day: Almost all of them.
Division of labor: “Mark does all of the sketches—James’ women look like men. At first, Mark was in charge of draping and James did the tailoring; that’s all blurred now.” —Mischka
Most likely to argue over: Non-work-related stuff.
From the fall WWD review: “The looks were most arresting when kept unembellished or rendered with controlled glamour, à la the smoking, although pairing them with scarves at the neck as Raf Simons did for his spring Dior collection was a styling mistake.”